Red Rose Convention was a slash multimedia fan-run convention held in the UK from 1998 to 2002. Attendance numbered around 50. It billed itself as "an unashamed multi-media 'slash' convention, two days taken out of Real Life to talk about slash without let or hindrance." 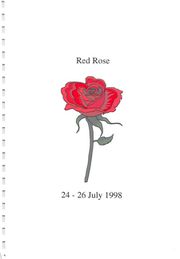 cover of the 1998 program book 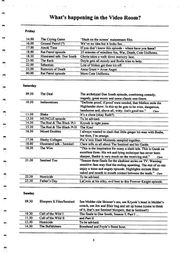 The chair person was Ruth Saunders. The guest of honor was M. Fae Glasgow.

This con had a drabble contest, a caption contest, and a raffle.

The program book contains four long excerpts from fiction written for this con, though does not give information where this fiction was later published. And it wasn't in the the 1998 Red Rose fiction zine...

Other people - This is a hotel and we aren't the only guests. We're just the only ones who matter. Despite that, please don't leave zines with pictures around where the public can pick them up, and don't leave them about in your rooms when you believe the hotel staff might see them. If necessary, put the Do Not Disturb sign up. If someone reads a zine despite your reasonable precautions, I tend to see that as their problem, they shouldn't be so prurient!

Badges - All our attendees will be wearing badges, please don't let people who are not wearing badges into our areas however confident they look. Unless they are hotel staff, of course. THIS IS IMPORTANT! We don't all know each other, after all, and we wouldn't want anyone to walk in on anything they weren't expecting. If you lose your badge we can make you out another, but we don't have an inexhaustible supply.

Stewards - To an extent, in a convention as small as this one, everyone is a steward. Please keep an eye on our equipment and don't be afraid to say something if you are at all unsure. Don't leave it to someone else to speak up. A few people have volunteered to steward certain rooms at certain times, to these people we are very grateful, it would be very difficult to run the convention without them.

Library Zines - These have been loaned to the convention by fans, please don't damage them or take them away. We will be having a loans book if you want to take them to your room overnight, and the library steward will sign them back in next day. If you have damaged a zine inadvertently please don't leave us to find out, let someone know immediately. After a great deal of thought, we have decided not to ban drinks or food from the zine library (some folks would practically die of thirst!) but that means people must be even more careful of the zines. And remember that if you do damage a zine beyond repair we might very well ask you to pay for it! If all that sounds a bit off-putting, we're sorry - but many of the zines in the library belong to the committee and the rest belong to their closest friends.

In the 2002 convention flyer, the convention offered the following programmming: "The programme will be fairly relaxed. It will include a video programme of programme episodes, music and gay-interest videos and there will be a convention library and a dealer room. We plan discussions on the slash issues of the day such as: "Why don't slash writers write good female characters", "The first slash story wot I wrote," "Warnings? I don't need no steenkin' warnings," and "Name your slash cliché", and we'll be taking part in games including the perennial favourite Just a Minute." 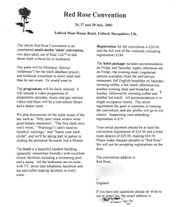 flyer for the 2002 con, it mentions that the GOH was to be Minotaur, click to read

We had several interesting panels -Torch, a scarily good and prolific writer from Sweden, gave a couple of talks, one of which I missed because I was talking about torture over tea in the slash library with a couple of friends but the one I went to was fascinating. She had a bunch of writing tips that she wanted to share with us and get feedback from good writers. We didn't get as far as the feedback, but I enjoyed listening to her sense of what makes a good story, and was interested to find that she doesn't do plot outlines either.

We played slash pictionary which is always fun with a large group, because someone guesses the word inside five minutes and Fan Bingo (49 panels each with something that was true for at least one con attendee) as an icebreaker on Friday night. (There were 68 attendees.) I got all 49 signed off because I cheated and got a member of the hotel staff to sign the one that said I have never read a zine before....

The main event of Sunday at Red Rose... was the Masters of the Universe competition. We, the Pros gang, had entered this mob-handed. We were up against Sentinel, Blake's 7, Harry Potter, Hercules, Star Trek (The Original Series) and Star Trek Voyager. Having not done any thing like this before, wed decided to opt for the over-the-top approach there were at most two representing the other fandoms, and at least six of us. The Sentinel presentation included some song vids, the Blakes 7 some filk singing, and the Harry Potter constant reminders that Alan Rickman was involved! Meanwhile we were all sitting nervously waiting our turn, with [name redacted] looking particularly uncomfortable in her hired fancy dress outfit." [1]