The site is named after the Time-Turner, a magical device from the series that allows its user to travel in time.

After the publication of Deathly Hallows, the archive expanded its scope to also accept fanworks about the canonical next-generation characters.

The site also included a forum.

The site was founded by Carissa, who first publicly wrote in March 2004 of her intention to start a new HP website after the demise of Gryffindor Tower (at which she was an admin).[2] She officially opened the site on April 1, 2004, though its first few weeks were marred by technical issues.[3] The archive ran on eFiction 1.1.

The site was updated in July 2004 with a new default skin featuring art by Marta and some additional features.[4]

In March 2005, Carissa received a cease and desist letter from the Motion Picture Association of America regarding the archive's use of the MPAA ratings system ("G" through "R"). As a result, the archive switched to a more generic age-based system ("Everyone" through "16+").[5]

Over the course of the next year, Carissa recruited a team of admins to help evaluate fanwork submissions: Lady Chi became an admin in May 2005, Pineapple Queen in August 2005, Duck the Duck and Hufflepuff in January 2006, and Dark_Pidgeon in April 2006.[6]

The site started experiencing technical issues in June 2006[7] then again through much of 2007,[8] due to issues with their web host and multiple server moves. This resulted in occasional downtime and forced the archive to temporarily stop accepting submissions for certain periods. Making use of one of these periods when submissions were turned off, in February 2007 the site was upgraded to eFiction 3.1 and given a new layout design featuring art by Makani.[9] There were also issues with the forums, which reopened in March 2007.[10]

The archive temporarily closed to new submissions surrounding the releases of both Half-Blood Prince in July 2005 and Deathly Hallows in July 2007.[11] Following the release of Half-Blood Prince, the archive's Submission Policy was expanded to officially allow works about Marauders-era characters set at any time, including canon-contemporary Remus/Tonks fics.[12] Following the release of Deathly Hallows, the archive's Submission Policy was updated to allow two additional types of stories: Snape/Lily friendship fics (emphasis theirs) and fics that feature the "Epilogue Kids".[13]

In March 2009, story validation was turned off indefinitely, meaning that new submissions would be automatically added to the archive without needing to be approved by an admin. Carissa noted that this was because she had become too busy to keep up with the submissions queue, but that she would still monitor new works to make sure they were in line with the archive's policies.[14]

On November 23, 2010, Carissa announced that the site would be closing when the domain name expired the following March. She invited anyone interested in taking over the site to contact her.[15]

The archive only accepted "quality" fanworks, as judged by site owner Carissa and the admin team. Carissa wrote that she did not accept all submissions because "the focus of this site is on quality not quantity and I'd rather not compromise this just so I can have a large archive."[17]

The archive did not accept stories with the following content:

Why don't you accept slash? Or stories rater [sic] higher than "16 and older"?
Because, right now, it's just me running the site, and I only accept stories I want to read (since I have to read them all), and slash is something I don't enjoy. For the most part, I think they are out of character. Also, accepting anything higher than an "R" rated story presents its own problems in that I have to worry about who, exactly, is reading them.

The Submission Rules page also stated regarding slash: "The webmaster does not perceive a romantic relationship between Remus and Sirius, nor does she want to read about a relationship between Snape and anyone." (The FAQ clarified that "well written" het romances for Snape were permitted.[19])

The Time Turner.net forums used Invision Power Board software, and in March 2007 switched to Simple Machines Forum (IPB had discontinued the free version of their software). The Invision boards required users to register for them separately from the archive, but the SMF boards were bridged with the archive and used the same registration.[10] 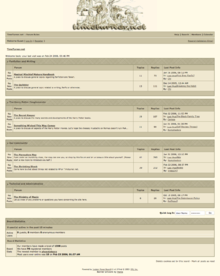