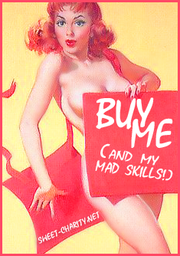 Sweet Charity was an online fan run charity auction that took place mainly among the Livejournal blogging communities. The model was simple: fans would offer to write a story, edit a songvid, create art or offer baked goods, jewelry and apparel to raise funds for charities. Other people would bid on these items and the funds would go to the charity. Between 2006 and 2010, it raised more than $80,000 for a wide range of charities covering sexual abuse, medical research, children and even in support of a writer's union. Both the sellers and bidders were primarily women.

The project went on a brief hiatus in 2009 partially due to the overwhelming number of participants. It ran a scaled down charity auction in 2010 that raised $6,000.

Auctions were run twice each year in March and September - the first charity to be supported each year was RAINN (Rape and Abuse Incest National Network) with the second charity being chosen by a poll.

Fandom as a slightly squishy whole contains some of the most talented and generous people imaginable. Which is fortunate because, otherwise, they'd be completely unsellable... ~ Lithium Doll 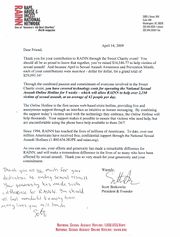 2009 thank you letter from RAINN. The charity auction raised almost $15,000 that year which was matched, bringing in $29,000 of funding. Click to read

In June 2006, approximately 50 fans offered their services or crafts. By March 2007, bidding opened with over 140 participants (and the number climbed higher by the end of the charity auction). By September 2007, the number opened at 204 and by 2009 as many as 281 fans were offering their services up for auction.

The Tech Behind The Mirror

Perhaps even more impressive than the number of participants and the funds raised was the fact that lithium doll designed the Sweet Charity auction platform code from scratch. Over the years her code tweaks also added features such as the ability to place multiple bids, track and be notified of competing bids, a tags masterlist, multiple donations payable to Paypal in one go, and personalized advertising buttons.

In 2009, as the project began winding down, lithium doll offered the code for free to anyone who wanted to host a similar online initiative.[1] It was later used to run the Help Haiti charity auction.

When putting their skills up for bid, fan writers would often write short blurbs describing what fandoms they would be willing to write in, the story length they were offering, and any other features.

"I'm offering two fics over 1,000 words each in the fandoms I'm currently active in - SG-1, SGA, Gilmore Girls or Supernatural. Gen stories a preference but I'm willing to negotiate on pairing-centric fics. Crossover requests are welcome. My only 'no' is [I will not write fiction in] any [of my] current WIPs or verses."[2]

Other fans offered a even more detailed lists of what they'd be willing to write. An example can be found here from a fan who was offering fan fic, vids and fan art.[3]

In addition to listing their fandoms, vidders would also offer links to their existing vids so that buyers could preview their work:

Buyer input: Name your fandom and give me a song and leave me to it or provide me with a prompt or more fleshed out theme.

Song choice: I would prefer 2 or 3 song options from different genres. The only genre I will exclude is Emo and its sub genres.

I am happy to vid any pairing including slash/femslash, character studies, ensemble pieces, multifandom. I will vid humour, angst and anything in between.

Please note that if you choose Buffy, Spike is off the menu.

To see examples of my previous works please visit...."[4]

While the charity never kept a list of all the vids made by Sweet Charity vidders over the years, Morgan Dawn did create two Sweet Charity Compilation DVDs.

Fan artists' offerings were often less restrictive: "I will make a batch of 20 icons, 2 headers/banners of any size, and 1 wallpaper. You can request any fandom, pairing, person, place, and/or thing. You can also request from multiple fandoms. If it's not a fandom I normally do, then it would be much appreciated if you could point me to pictures or screencaps, but it's not a requirement[5]

However other fans could get very specific: "I won't use images of the actors outside of character and I won't mix in any NC-17 images from outside sources."[6]

Tarot card readings: "Tarot reading, using DaVinci Enigma Tarot, in live chat or via email. Live chat usually takes an hour to an hour and a half for a full reading (Celtic cross is my preferred spread, others available at your request)."[17]

Podfic:"I'll podfic a fanfic of your choice, up to 10,000 words. I'm happy with any fandom, pairing and rating [I've previously recorded Harry Potter, SGA, BSG, Death Note and Honeydew Syndrome], but would prefer not to deal with positive depictions of rape, paedophilia and extreme kinks. Due to pronunciation of names it might be good to check with me in advance if I have some familiarity with the fandom, however, eg. for manga. I would definitely need permission of the original author, if that's not you, before recording can begin.[18]

General audio recordings/translations: "I will record any text/fic/poem etc reading in french (or in english with a french accent, that's your call ;)). Number of records will depends on the length of the texts to read but overall, we're talking around the 3000 words radius. This is my first time offering this so you should be warned I may not be the best reader out there ;) I can do a translation too, french-english or english french, but a way smaller length in that case as this is way much work."[19] 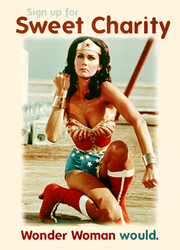 The charity received broad support across a wide range of fandoms and remained remarkably conflict free. While both the producers and participants in the auctions were primarily women, in 2009 a few participants pointed out that the often adult subject matter of some of the auction items may not be appropriate for a charity that supports abuse victims or a medical research charity or a children's charity.

The debate narrowed down to those who felt that the charity items brought in a great deal of donations for people and, as a result, they made real lives better. And, as others explained: The charity stories and art and vids are "fictional. It's not real. Sometimes it's even therapeutic."

Those who expressed concern over the auction items' subject matter were quick to point out that adult themed topics, such as those dealing with abuse and sexual assault were inappropriate themes and should not be allowed to be included in a charity fund-raiser. And, since some of the participants themselves were survivors of abuse, allowing fiction, art and vids with these themes "may be triggery for them."

After debate in the community and a poll, it was concluded "that the pros of the certain genres do outweigh the cons, and not just on a purely fiscal or freedom-of-speech level: they help people. That's all they need to do. Ever. The rest is noise. There will be things put in place that will help people find or avoid certain content as they choose. If you are uncomfortable taking part in an auction - for whatever reason - that is entirely respected and understood."[20]

Some fans also disliked the prostitution terminology Sweet Charity used, e.g. the use of "ho" in their slogans (in 2008, the project featured the phrase "I want to be a Charity Ho!" on their website, and on a number of promo icons and banners).[21] Additional themed banners and icons were offered (see image to the right and the first few images in the gallery below).

The auction (and the organizer) even inspired one fan to write a poem in their honor:

There once was a doll named lithium
who liked to roll around on balls.
But then she shifted to halcyon
and dominated the charity mafia.
Paypal trembled at the sight of her,
Rainin loved her,
and the things she could do with php script
were a real trip.

So don't be hating the don doll halcyon
who used to be lithium
After all, Sweet Charity always rides again.[27]