Starlines is a gen multifandom anthology. 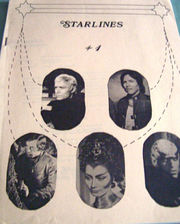 It contains stories from Space 1999, Hawk of Buck Rogers, UFO, Empire Strikes Back and Battlestar Galactica.

tracking across the world.") (U.F.O., includes the characters Al Freeman and Alec)

Starlines 2 was published in 1982 in letter size format and has 110 pages. 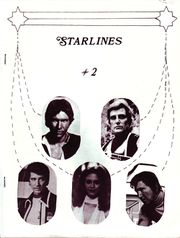 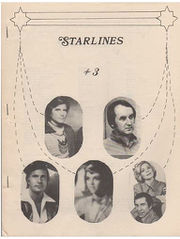 cover of issue #3 -- it portrays (from top left to right: Starbuck from Battlestar Galactica (1978), Vila Restal from Blake's 7, Buck Rogers from Buck Rogers, Gay Ellis from U.F.O., and Helena Russell and John Koenig from Space:1999

[No Greater Gift]: Kathy Hintze was one of the first authors I discovered on the web when I fell for Blake's 7 in 2001. Vila is her favourite, but she does tend to torture the poor guy to get Avon and others to show they care. Though I think her Vila lacks the trademark Restal sense of humour, I do enjoy her stories very much; she writes all of the crew well, especially Avon and Vila. This story, set in season 3, is a classic hurt/comfort story and a favourite of mine. Vila and Avon decide to break into a vault containing the main offworld monetary centre of the Federation Banking System on the aptly-named planet Mephisto. The vault is protected by complex security systems and concealed traps, and Avon makes a mistake; Vila impulsively saves him, almost at the cost of his own life. Avon obviously cares very much for his injured friend, but without any out-of-character sentiment or overt revelation of feelings. He shows it by his actions and by the concern he displays when no-one is there to see--just as in the series. [1] 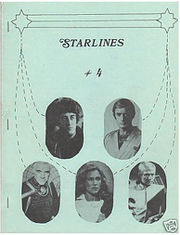 Starlines 4 was published in February 1984 and is 99 pages long. 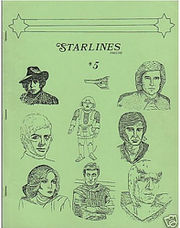 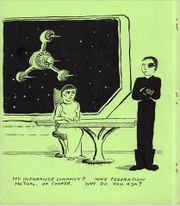 back cover of issue #5, Anne Davenport

Starlines 5 has a June 1985 publication date, but the editorial states that it did not come out until December. The zine contains 123 pages.

I GIVE UP.' I realize that's not a good thing for an editor to do, but at this point—I GIVE UP. On Starlines #5, that is. I appreciate everyone's patience and understanding, and it has helped tremendously. I have simply decided to go ahead and get the zine printed— as is— rather than to make you wait any longer. So please ignore the typos — I don't want to know about them.

If there is a page missing, or anything like that, feel free to tell me about it, but anything else . . . well, let's just pretend it doesn't exist — PLEASE.

I have really begun to think this issue of Starlines was jinxed, (I know it is now) sometime about December.

The good news is that issue #6 is being put on a computer, so it will be easier to work with and to correct. Hopefully with this issue printed, everything will settle down—I hope.

As always, we'd love to hear from the readers, but only about the stories, NOT about the typos.

The cover is a bit different this time, due to the fact that the guy who usually does it is in Portland and I'm in Eugene, Hopefully, we'll get back to normal in the next issue. Trinette Kern's story "Rise from the Ashes" was printed in the Thom Christopher Fan Club's year book. The "Celestial Message',' listed in the flyer for this issue, isn't here. Mainly because it is my story and at this time, I can't find the dumb thing.- (That'll teach me to move!)

Before I end, I'd like to thank all the friends who have helped me get through the last year. I couldn't have done it without them. There were good times in with all the bed. I got to meet Paul Darrow, Mike Keating, Brian Croucher, and Terry Nation from Blake's 7, as well as Nick Courtney, John Pertwee, Pat Troughton and John Nathan-Turner from Doctor Who. As well as a lot of family times. Seeing Esther being chased by a six foot grey mouse was priceless (we've got the photos!) Anyway, we'll try for a better issue next time, the first story is almost completely in the computer right now—and it's a long one.

Stay tune for the next issue as well as our new zine: Return of the Seven, a Blake's 7 zine. The ad's in the back of this zine. As always, we need submissions. They don't have to be our usual fare, there are lots of science fiction shows/movies out there, so let's here about them. Greatest American Hero is considered s/f, V, Sapphire and Steel, if it's science fiction and good, we're interested. So let's hear from you. Can't promise we'll take it, but at least you'll have a return letter you can feed your goat. 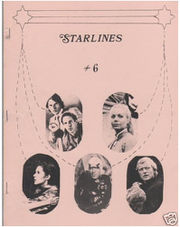 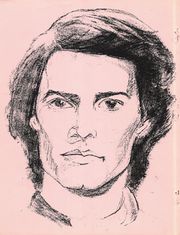 back cover of issue #6, Esther Reese

Starlines 6 published in August 1986 and is 124 pages long. The art is by Esther Reese, Vikki Weidner, and Sheila Paulson.

Just a few words about this issue and then you can get on to the good stuff; the stories. The few things done in a different type and reduction were completed on the computer at work when the boss wasn't around.

I would like to thank a number of people; Anne Davenport for the use of Zen and Slave—without which this would have taken even longer: Valery King for her typing on the stories and for putting up with me all those evenings as I pecked away beside her chair. Sheila Paulson, for her stories, encouragement, and artwork donated after my frantic appeals for HELP! Esther Reese for her typing, writing, artwork and confidence that this zine could be completed within this century.

This issue is a departure from previous issues, evident in the non Science Fiction stories included in these pages. I decided to go with a wider selection for a number of reasons, mainly because I like the stories, but also so that the zine would appeal to a wider audience. I also had two stories that were not returned in time by their authors. Our Ladyhawke story is entitled "On Pain of Death", mainly because the author was so threatened into finishing the story. Esther wanted me to mention that the Spanish in "Forms and Shadows", was written by a first year Spanish student, so if she got any of the grammar wrong, please forgive her.

This issue of Starlines will be the last. There are a number of reasons for this. The main reasons is my lack of time to work on the zine, and related to that is the fact that it is not fair to the readers to have to wait so long between issues. My job is extremely time consuming, and cuts heavily into my free time. [Details about employment snipped.] This severely cramps my typing time for the zine. So this is going to be the last issue of Starlines. I will be printing a second issue of Return of the 7, but after that, I am leaving zine editorship.

Thank you all for buying the zine, and another thanks to Esther and Sheila, without whom this zine would probably not be.