From Fanlore
(Redirected from Return of the Seven)
Jump to: navigation, search

Return of the 7 is a gen Blake's 7 anthology. 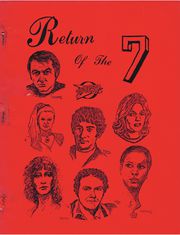 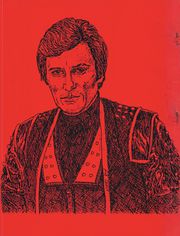 back cover of issue #1, Vikki Weidner

Return of the 7 #2 contains 220 pages and was published by Starlines Press in May 1987. The art is by Vikki Weidner (front cover), Sheila Paulson, Esther Reese, and J.L. Walker (back cover). 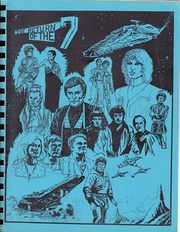 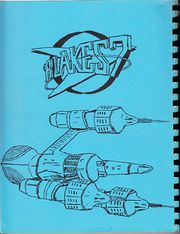 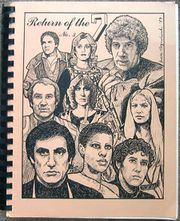 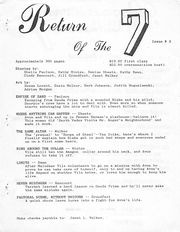 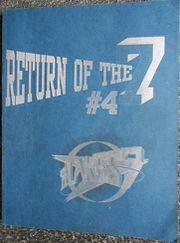 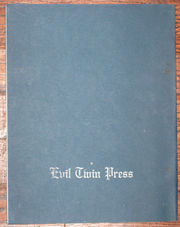 The art is by Judith Boguslawski and and Esther Reese.

Janet Walker swore she was not going to do any more of these, yet here it is, 170 perfect-bound pages, complete with a striking blue and silver cover. Reportedly, we have Sheila Paulson to thank for forcing an other issue out of poor Janet!

The longest story in the zine is Sheila's "A Fine Collection of Allies"; it's an absorbing alternate third series scenario, uniting Tarrant and Dayna with the 2nd series crew. As expected from Sheila, the characterization is terrific. I love the way she allows us to see each of the principles through the eyes of each of the others. Her Tarrant is bright, talented, knowledgeable, witty, sublimely self-confident, and more than a match for Avon and Blake.

The other stories in the zine are all enjoyable, and Tarrant isn't bashed in a single one of them. Ruth Berman's "In the Lion's Den" tells us more about the fate of a certain character that I've always found fascinating, and has some brief but charming Tarrant moments. Jill Grundfest's "Masque," though plagued with grammar/formatting problems, is an interesting and different story. Usually, PGPs revolve around Avon and Blake patching up their differences, or around Avon and Vila re-hashing Malodaar. This time, it's Avon and Tarrant who have to make peace with each other! And Sheila's "Eagle Forgotten" offers a glimpse of the Federation long after the rebellion has been won, a time when Blake is not remembered and Avon is recalled only as "one of the people with Tarrant"!

It's fascinating to compare the treatment of Tarrant in various issues of The Return of the Seven. In the first issue. Tarrant is unpleasant, unintelligent, and unlik- able, even in Sheila's story. He is much improved in #2, and #3 has the lovely "Empire of Sand." Issue #4 has several stories in which Tarrant is favorably depicted and none in which he is bashed; if this trend continues, Carol McCoy's dream of Tarrant taking over fandom could come true! [1]