Kakashi x Iruka, or KakaIru, is the relationship between the characters Hatake Kakashi and Umino Iruka from the series Naruto. Although Kakashi and Iruka have very little interaction in canon, they are a popular slash pairing. Before Shippuden was aired there were very few adult characters with significant roles in the story, as the action was focused on the Genin. Since they were two of the most prominent adults in early Naruto, the lack of other options made this pairing very popular in the early days. Some fans speculate that they are slashed because both are parent-like figures to the titular character Uzumaki Naruto. Fandom pairs Kakashi with a variety of characters, but Iruka is almost exclusively paired with Kakashi.

As with many yaoi pairings, name order is often used to denote seme and uke. While KakaIru is by far the most common, there are also fanworks labeled IruKaka or KakaIruKaka.

KakaIru is the most popular Naruto pairing in Japanese fandom.[citation needed]

In Western Naruto fandom, KakaIru is commonly seen by the whole of fandom as not being very popular, though this may be because KakaIru fandom keeps out of general communities. The KakaIru LiveJournal community is the second largest pairing community for Naruto fandom.[1] KakaIru is also comparably active to the larger SasuxNaru community.[2]

Themes and Trends in "KakaIru" Fanfic

KakaIru fanfic ranges in tone from fluff to darkfic. Accordingly, characterization varies widely across fanworks. Kakashi is presented as anything from a socially awkward dork to a highly damaged man who is a danger both to himself and those around him. Iruka is sometimes a shy and blushing schoolteacher, and at other times, a prankster with a devious mind and a sly sense of humour.

There are a variety of themes that frequently appear in Kakairu fanworks.

The Chuunin Exams are frequently a turning point in Kakashi and Iruka's relationship in fanworks. The two men had a very public and heated argument in canon when Kakashi nominated Team 7 for participation in the exams. Iruka protested, feeling that the members of Team 7 were too young. In fanfic, this confrontation either leads to a frosty and awkward relationship between Kakashi or Iruka, or sparks the first feelings of curiosity and respect.

Kakashi can often be found stalking Iruka in fanfic. The reasons vary from fic to fic: he is sometimes suspicious because Iruka demonstrated an unexpected talent, sometimes he is simply suffering from boredom and idle curiosity, and in other fics, Kakashi is obsessed with Iruka and too socially maladjusted to figure out his own feelings or how to approach the other man. [3]

Sometimes, Iruka suffers silently--with or without input from his friends--from what he believes to be an unrequited crush on Kakashi.

A very popular trope in KakaIru fanfic involves giving Iruka special abilities that he hasn't been shown to possess in canon. These abilities range from reasonable skills (an affinity for traps, or a history with intelligence and infiltration) to OTT powers (stories dealing with the latter are sometimes referred to as Super!Iruka). [4]

Fans list a variety of reasons for the popularity of this trope:


For me, I think it's for the entertainment/creative value to read those. [...] I'm not thinking it's that authors are making Iruka *worthy* of Kakashi, moreover they want to create original content that still keeps both characters challenging and on their toes.[5]


For me, I like the whole new level of problems it brings to the dynamic between the two, and the plot. Iruka is generally the more stable one in the relationship, and it's fun to bring that out.[5]


...For me it's because we know so little about Iruka but as fans we all just know that Iruka is awesome and so we like to come up with reasons/abilities to showcase that awesomeness.

It also helps to balance out Iruka and Kakashi's relationship because (in my opinion) if Iruka really were just a run-of-the-mill chuunin, albiet a very sexy one, I don't think Kakashi would be all that interested in being in a lasting relationship with him. Not that there aren't a number of wonderful fics that feature Iruka with no special powers but I think they help hold Kakashi's interest; even if it's something as simple as "Iruka is an awesome prankster.[5]


Potential and inertia. The early volumes of Naruto really don’t make it seem like Iruka is going to be as absent as he ended up being, there was that one scene where they argued, and a lot of people were put off by Gai’s appearance/personality so Kakashi/Gai didn’t end up getting as big as it otherwise might have. By the time another potential dude in kakashi’s age range was introduced, half the people interested in Kakashi m/m had another OTP already.

Twighlight had previously read several of thehoyden's Kakairu fic, but kansouame brought further attention to the art form when she began posting theskywasblue's Building Block series to the main community. [7]

A sampling of Kakashi/Iruka fanart can be found by browsing Tumblr.

There are also many popular artists who post to the main Kakairu comm, as well as deviantArt. Japanese fanartists post to a variety of websites, including Pixiv. 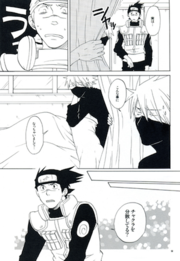 "Double Game," by Halco of Chikadoh. This doujinshi is an example of the ever popular clone sex trope.

KakaIru is an extremely popular pairing in doujinshi, not just out of Naruto fandom but out of any fandom. It is repeatedly one of the top ten most represented BL pairings at Comiket.[8]