Uzumaki Naruto is the titular character of the manga and anime series Naruto. Naruto is a ninja-in-training who aspires to become Hokage, the leader of the ninja village Konoha. He is also a jinchūriki with a demon fox sealed inside him from birth. 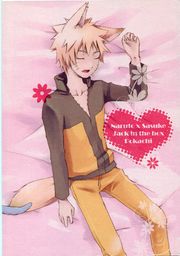 Back cover of the 2008 doujinshi SIM by Jack in the Box, featuring Naruto as a foxboy sleeping on a bed.