Itachi x Sasuke, or ItaSasu, is the relationship between the brothers Uchiha Itachi and Uchiha Sasuke from the series Naruto. Sasuke's in-canon obsession with killing his brother, Itachi's active interest in shaping his brother's life, as well as their happy childhood together and tragic fallout, has provided plenty of substance for this fandom to work with.

Works included in and accepted by ItaSasu fandom are not limited to an actual pairing or any amount sexual intention between the characters; gen pieces are commonplace, such as for examining the characters' interaction as brothers.

The term Uchihacest used to be synonymous with this pairing since the only two Uchiha being paired for most of the series were Itachi and Sasuke. The term is still occasionally used as a synonym, but it now also refers to any relationship among Uchiha family members. Uchibicest is also used for this pairing when Itachi and Sasuke are still young.

Possibly the earliest fanfic about the brothers, on LiveJournal, and possibly in all of fandom, is Sick Like Me by Hyatt Insomnia, posted 2003 December 19.

In 2004, Western ItaSasu fandom picked up. More works began to appear on DeviantArt, Fanfiction.net, and LiveJournal, and the communities ChurchofUchiha and Uchihacest were founded.

Itachi and Sasuke had a complicated childhood; they were the sons of the Head of the Uchiha Clan, with Itachi as heir. Despite external pressures, such as by their strict father, their childhood together was happy and flashbacks showed them being very close.

When Itachi was 13 and Sasuke was 7 or 8, Itachi murdered the entire Uchiha clan apparently just to test his own ability. (While this matter has recently been complicated in the manga, for most of the series this was understood to be the case and fandom developed around this premise.) Itachi left only Sasuke alive, telling him to harbor his hatred and to come kill him someday, and fled the village. This left Sasuke to grow up alone and set on revenge against Itachi.

Years later, when Sasuke was about 13 and Itachi was about 18, Itachi returned to Konoha to apparently abduct Sasuke's teammate Naruto. Sasuke confronted Itachi in a hallway and attacked him, but Itachi easily deflected the attack and disabled Sasuke by breaking his wrist. Itachi then proceeded to torture his brother psychologically with his genjutsu (illusionary technique) Tsukuyomi, making Sasuke witness the death of his family over and over again. This caused Sasuke to pass out and he remained in a coma for several weeks, until the legendary medic Tsunade was able to revive him.

When Itachi was introduced into the series, both fans and non-fans commented on the suggestive manner in which his scenes with Sasuke were delivered. At one point, Itachi has Sasuke pinned against a wall and leans in very close to him to whisper goading words. Their bodies are extremely close, if not fully pressed against each other, and the scene zooms in on their lips which are parted and near as though they are about to kiss. Their scenes are extremely emotionally charged and fans have made a number of interpretations regarding Sasuke and Itachi's feelings and thoughts in those moments, many of which have been sexually suggestive or erotic. For instance, YanaGoya famously reanimated the scene so Itachi actually kisses his brother.[2]

Additional fan service has been provided in official merchandise such as posters, folders, and pencil boards. Images range from playful moments where the two look happy together, to staring deeply into each other's eyes.

Their relationship is usually depicted in fanworks with serious and dark themes, extending from the tragic history between them in canon. Nearly all post-massacre fanfiction is enemyslash, and common genres include noncon or dub-con, angst, and character death. However, fanworks of when they were children may have more light-hearted themes such as fluff. Sexual tension between them as children is also common, including both UST and shota.

Due to the controversial nature of the relationship, a good amount of older fanworks have been taken down (either by the creator or the sites the work was hosted on) and can now be difficult to find.

Itachi's characterization has varied greatly depending on interpretation. Since his motives were unexplained for most of the series, fanwriters experimented with different possibilities. He has been interpreted as a sadistic sociopath who enjoys tormenting or torturing his brother, as an apathetic genius who toys with his brother out of boredom or for some manipulative strategic agenda, and as a damaged individual driven to extremes and internally conflicted. He has also been depicted as sexually disinterested.

ItaSasu also has cameos in a number of overlapping pairing pieces. Since Sasuke's obsession with killing Itachi has driven Sasuke away from other characters in the story, fanfiction for other pairings such as Sasuke x Naruto and Sasuke x Sakura will occasionally have Sasuke being torn between his brother and the pairing being shipped. ItaSasu is occasionally the hurt aspect of hurt/comfort fic for other Sasuke ships, either directly or implicitly. When Sasuke is "saved" by another character, he's being saved from his self-destructive revenge against Itachi.

Likewise, in ItaSasu pieces Sasuke will occasionally be torn between his love for his team and his determination for his brother.

Fanworks with other Itachi-ships are less common, though Kisame x Itachi has a small presence. Shouyuya and Marky-S have released a few of Kisame x Itachi x Sasuke triangle doujinshi, all of which are comedy/gag.

ItaSasu, in which Itachi tops, is the most prevalent depiction of this pairing. It is generally accepted that there is a social or power imbalance in Itachi's favor: Itachi is older and he's established a psychological and physical power over Sasuke in canon, and this places him in a dominant position in the relationship. If Sasuke initiates a relationship in fanworks, it is usually in a manner that offers Itachi control. If Sasuke is ever physically on top, he's still taking it and he's only there because Itachi allows him to be.

SasuIta, in which Sasuke tops, is extremely uncommon.[3] SasuIta is usually non-con, and a common trope is that Sasuke has his way with Itachi before killing him. Fanworks have interpreted Sasuke proving his strength and achieving his brother's attention through sexual dominance. SasuIta fanworks usually take place in the future when Sasuke is older and more capable as a ninja, and therefore strong enough to take on Itachi, and the pairing saw a slight pick-up following the in-series time-skip. The LJ community SasuIta was founded around 2008 April 01,[4][5] though it has since been deleted by the maintainer.

Both ItaSasu and SasuIta pieces are accepted by fandom and the difference between them has not been cause for much (if any) debate or tension between fans.

Fanfiction began appearing on LiveJournal in late 2003, and then on Fanfiction.net and DeviantArt in early 2004.

In April 2004, QueenAllie03 began posting ItaSasu fanfiction to the LiveJournal commmunity NarutoYaoi. Support was strong, and she went on to found the ChurchofUchiha LJ community.

In May/June 2004, Amayako began writing a series of four oneshots on DeviantArt:[6] Late Summer, Hate Stains, Outer Demons, and Oblivion. The stories are smut/PWP and noncon/dub-con. Fanartists Angeliq and YanaGoya have cited Amayako's work as inspiration for several of their art pieces, and Amayako was likewise inspired by their artwork. Amayako's works were taken down by DeviantArt and might no longer be officially hosted anywhere by the author.

In October 2005, Cursed Exile (website closed), which is part of the Sasuke-pairing community HeavenSeal and the website Crimson Shade, had a series of fanfiction awards. Ninjacat received the Lifetime Achievement Award for her fanfic contributions. Hana J was also a nominee. Both were prevalent writers in ItaSasu fandom. 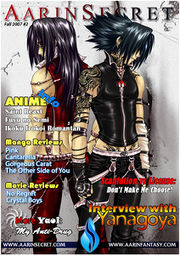 Angeliq and Yanagoya are popular ItaSasu fanartists from Western fandom, beginning around 2004. A number of their works have been removed from DeviantArt for being too sexual or suggestive. Both artists have cited the fanwriter Amayako as inspiration for some of their work, and Amayako was likewise inspired by both artists.

One of Yanagoya's ItaSasu pieces was featured as the cover of AarinFantasy's AarinSecret Yaoi Magazine Issue #2 in Fall 2007. Yanagoya was also interviewed for the issue and her other artwork previewed inside, including a section for her other ItaSasu fanart.

Doujinshi for this pairing is limited, with only a handful of new books coming out each year. See List of ItaSasu Doujinshi.

Mutsumix is the most popular doujinshi circle dedicated to this pairing, and almost every ItaSasu fan is familiar with her work. She has released over two dozen ItaSasu doujinshi since she began in 2005. Her stories feature a variety of scenarios, ranging from canon-derived to AU, from comedy to tragedy, from fluff to yaoi. In 2008 she organized an anthology release collaborated with other doujinshi artists.

Senjyo-yatai is one of the earliest circles to work on this pairing. They released six doujinshi as part of the Tsubaki series which re-told the story of Itachi and Sasuke in the Uchiha household with mostly dramatic and dark themes. Currently, the Tsubaki doujinshi are very hard to obtain and newer fans may not be aware of them because their works have mostly fallen out of circulation.

Other notable doujinshi circles who've worked on ItaSasu include Shouyuya, Echigoya, Sulaly (a combined effort between the doujinka from Echigoya and 10-Rankai), 3110445, Bai Tenshi, Jack in the Box, and Owlowl.

Kamibana is a scanlation team which has released several ItaSasu doujinshi and webcomic scanlations.