Franz x Albert is one of the most popular ships in the Gankutsuou fandom, pairing Baron Franz d'Epinay and Viscount Albert de Morcerf, childhood friends based on Alexandre Dumas's characters of the same names.

Many fans, even ones that don't necessarily ship Franz with Albert, agree that it is heavily implied in canon that Franz had romantic feelings for Albert, even if they do not agree about whether Albert returned those feelings. It has been rumored that director Mahiro Maeda confirmed that the Franz x Albert implications were intentional, but this remains unsubstantiated.[1][2]

Fans usually point to several scenes from the anime for evidence that Franz was in love with Albert, such as a conversation Franz has with Maximilien in which he says it is "impossible to stop loving someone ... even if you cannot marry."[3] 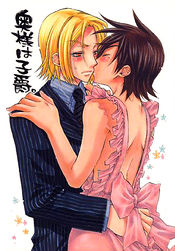 Because of Franz's death at the end of the anime, non-angst fanworks are either AU, denialfic, or set during or before canon.

There is a wide variety of Franz x Albert stories, including stories where their relationship is preestablished, first time fic, and stories where Franz's feelings remain unrequited. The Count sometimes assists Franz and Albert in admitting their feelings for each another, and sometimes also joins in.

Gankutsuou is a relatively small fandom, and as such fanworks can be difficult to find. Many Franz x Albert works are in the form of doujinshi. Franz x Albert fanfiction can be found on LiveJournal, FanFiction.net, and AO3.