Dabi/Shigaraki Tomura, most commonly called Shigadabi, is a slash pairing within the Boku no Hero Academia | My Hero Academia fandom between the League of Villains member Dabi and the group's leader, Shigaraki Tomura. Their first meeting in Chapter 67 quickly devolved into insults and an attempt at the other's life from both. As they rarely interact directly in canon, leaving fans with plenty of space to imagine their encounters, this meet-ugly became the basis for the pairing. It is popular in the community of villain fans within the larger BNHA fandom, with 2,136 fanworks on AO3 alone as of April 2021.

The first Shigadabi fanfiction posted to AO3 is the explicit one-shot, Begging for Thread, by drunkenCharm on April 28th, 2016. The tags Hate Sex and First Time summarize early Shigadabi fanfiction content on AO3 perfectly; all fans had to go on were the killer Enemyslash sparks instantly flying when the two met, the fact that Shigaraki threw temper tantrums and spoke in gamer terms (while being confirmed a near shut-in because of All For One) up until his failure at USJ), and Dabi being the epitome of angsty, mysterious bad boy. It is a common headcanon that Shigaraki is a virgin, with experience ranging from negative to has only ever watched porn to incel. Perceptions of their early characters are, arguably, fairly accurate given how little of the two there was in the series then, lending to their staying power in the fandom.

Shigadabi fanwork can be actively found as of April 2021 on platforms including Tumblr, Twitter, DeviantArt, Tik Tok, YouTube, and Wattpad, in the forms of fanart, fanfiction, podfics, AMVs, cosplay, and more. 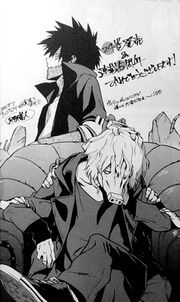 This bonus postcard came with the release of Volume 28 in Japan. It's the closest to canon Shigadabi art the ship has so far, and is, at the very least, still technically Dabi & Shigaraki Tomura.

Because there are so few instances of them directly talking to each other, the times that they do (and don't) are highly scrutinized.

Do you have good Smash!! pics of Shigadabi? How does a gallery underneath Dabi's bio sound?

As this alludes to itself as a gag manga (see Dabi's Smash!! bio below), many do not consider it canon. BNHA Smash!! does have more Shigadabi content than canon most likely ever will; the reader gets to see the League of Villains go about their day-to-day shenanigans and gives humorous and adorable situations a place in the otherwise life-or-death stressed group. We see how Smash!Dabi and Smash!Tomura interact, and Dabi's profile even explicitly clarifies their relationship:

"... [they] can't help but squabble like an old married couple."

Shigadabi has been depicted in fanworks with a wide range of themes. Because of their villain status and tragic origin stories, dark themes are common. For that same reason, however, there are plenty of lighter themes and tropes prevalent, from fluff to fix-it fics where neither become villains. AU's are extremely popular for the pair.

Their relationship has been accused of being problematic, most likely due to the dark and PWP heavy content associated with not only Shigadabi, but villains as well. This stigma has unfortunately carried on into cases of harrassment and online bullying, only adding to the animosity between hero and villain stans set upon them by their favorite characters. See: Villain Stan and Hero Stan for more.

One popular depiction is Dabi being more than the canonical 1 inch taller than Shigaraki. This could have come about from fans having to guess, as their official heights weren't revealed until much later in the series, as seen here in an impressive feet of fannish inference to figure out the League's heights in 2017: Dabi is determined to be the tallest, and looking at the manga panels, one would be hard pressed to disagree without 20/20 vision. It's also possible that Kohei Horikoshi hadn't decided their exact heights from the beginning as he mentioned not having planned on making it far enough to create official profiles for the villains.

A well known example can be seen here in fanart by justvritart. Shigaraki is depicted to be much shorter than Dabi, as well as commenting "warm" while he hugs him. This ties into another widely spread headcanon:

Dabi having an unusually high body temperature because of his Quirk and Tomura being constantly cold is a common headcanon. Though it was revealed in Chapter 283 that Todoroki Touya inherited his mother's constitution (that is, his body is weak against fire and, presumably, heat), the headcanon is well loved and speaks more to the parallels connecting the two thematically. Shigaraki's side of the Hot/Cold Headcanon could be seen to be supported by his first words ("I'm cold.") upon waking in Chapter 272. Other such connections fans have noted:

Basically, much more is needed on "fanon" Shigaraki and Dabi!

He starts the manga off labeled a "man-child" by the Heroes; he is quick to anger when things don't go his way, and attacks potentially powerful allies for insulting him. His habit of scratching his neck is commonly theorized to be a symptom of his quirk, with a notable headcanon being that he suffers from a form of skin disorder that, more often than not, focuses on a depiction of Shigaraki Tomura that some felt strayed too far from canon.

As Shigaraki's character developed in the manga, a post on Tumblr by user echodrops highlighted the differences between his fanon and canon character, spurring discussion on his evolution and how it should be reflected in fanfiction.

A more "fanon" characterization for Shigaraki similarly shaped Dabi's. Early Shigadabi tropes, revolving around their volatile first meeting, included enemies to lovers and hatesex, adding to the pair's "problematic" perception by parts of the fandom. As the community and the character's popularity has grown, so too has the number of interpretations of their dynamic and characters.

Shigadabi With Other Ships & Polyamory

Shigadabi commonly appears alongside DabiHawks, Chishig or Dabihaul (Shigaraki and Dabi paired with Chisaki Kai respectively), and Spinnaraki (Spinner/Shigaraki, usually in the form of a love triangle. Popular polyamorous relationships include Shigadabihaul, or Chishigadabi, Hawkshigadabi, and Shigadabi with Himiko Toga, Bubaigawara Jin, or Iguchi Shuichi. These ships can be seen most prominently in fanart and fanfiction.

There has been some tension between fans in regards to who tops or bottoms, like any fandom, though the villain community is relatively calm due to its smaller size compared to the hero community. The rigidness of the older "seme" and "uke" classification is also off-putting to some in its perpetration of stereotypes; the fluidity of people and subsequent change in society since the height of their use could have contributed to the push towards terms in fandom that aren't so cut and dry. As it comes down to preference, there are plenty of both to choose from on AO3, as well as a Switch tag for both:

Alpha/Beta/Omega Dynamics is a fairly popular trope/AU/tag within the ship that ties directly to the top/bottom debate, as a top and an alpha are often associated with power and dominance while a bottom and omega are associated with submissiveness, though not necessarily weakness. The first instance of the tag on AO3 is Tomura Has a Bad Day by user HorribleDynne on November 12, 2017.

Other points of view are desperately needed for these to be complete!

There is extreme tension in the greater Boku no Hero Academia fandom between fans of the heroes and villains, effectively dividing them into automatic sides based on the characters they enjoy or stan. These two camps are commonly referred to as hero stans and villain stans, though "villain sympathizer/apologist" has been used with insulting intent towards those that love the villain characters. Discourse in this vein is related to the larger Fiction vs Reality debate common in the fandom, wherein it is argued that staning a character does not mean that you condone their actions, and in turn does not say anything about the stan as a person (besides their personal tastes). Because this ship involves the two most popular villains in the series, Shigadabi fans have dealt with this stigma.

Dabi and Shigaraki are also two of the older young adult characters that get the most screen time and character development, leading to many fans outside the series' "target age" feeling a greater connection to them as they present a more adult storyline than the main cast (who are largely teenagers in highschool). Fans can explore darker, more mature and complex themes easier because of their canon backstories; again, topics that attract an older, more mature crowd. This has caused tension akin to what many fandoms, especially shonen-based fandoms, have seen before. Twitter culture keeps strict user-set boundaries on profiles created with NSFW intentions, with a visible age of 18+ (or more) in a person's biography being needed to follow or the follower runs the risk of being blocked or softblocked. The Shigadabi community does have a considerable amount of NSFW content and continues to be heavily smut/PWP focused, so the boundaries set and respected by creators and consumers are incredibly important on sites without fan-specific tagging systems like Twitter.

As mentioned above in "Depictions in Fanworks," the ship has been said to be problematic and abusive, most likely due to their canonical relationship, the content that first stemmed from it, and continued use of the ship to explore sensitive and taboo subjects.

Examples of the tropes or genres shaping Shigadabi, alphabetized.