Compounded Interest is a slash multifandom anthology. It had a great deal of Professionals content.

They were first published by AMC Press beginning in 1992. In 2018, they were reissued in print and PDF by Requiem Publications. 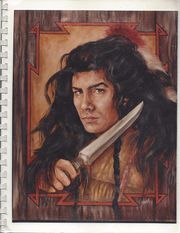 cover of issue #1, by TACS. The cover shows an AU Bodie, most likely from the story Shaman, which is a historical AU set in the American West

Compounded Interest 1 was published in 1992 and contains 256 pages. It has color art by TACS.

See reactions and reviews for Antidote to Apples. 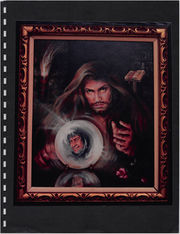 Compounded Interest 2 was published in 1993 and contains 184 pages.

None of the artists are identified in the zine itself but appears to be by TACS and someone with an unidentifiable signature.

Compounded Interest 3 was published in 1994 and contains 164 pages. 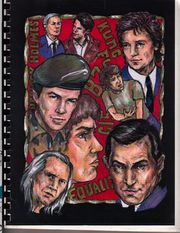 this cover is the 164-page edition 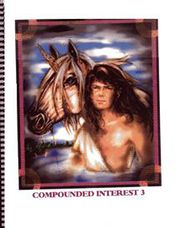 cover of one version of issue #3, by TACS, this cover is the 184-page edition.

There appear to be two editions published in 1994. Each edition has a different cover.

One contains 184 pages and has art by TACS and RAG.

Mystery! One edition contains an extra lengthy Equalizer story, "Unlikely Cupids," but despite this, is 20 pages shorter than the other issue, clocking in at 164 pages. The art in this edition, while completely uncredited, appears to be all by TACS.

The TOC from the 184 page edition. 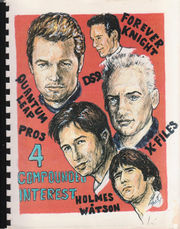 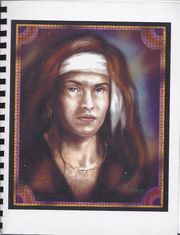 another cover of issue #4, TACS 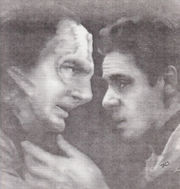 Compounded Interest 4 was published in 1995 and contains 216 pages and art by TACS.

[Master of the Rebels]: ... a B7 spoof of the Pros slash opus "Master of the Revels". Blake gets knocked on the head during the raid on Central Control and becomes convinced he is a master magician. Jenna Vila & Avon have to disguise themselves as a troupe of performing artistes until Cally can rescue them... This is fun, but not really slash at all, although B does occasionally feel Avon up...[4] 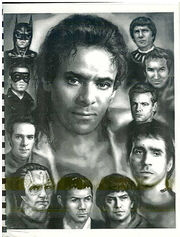 Cover of issue #4.5, by TACS. The central image is one of Julian Bashir from DS9. From top left to bottom to top right corner: Batman and Robin, Bashir and Garak (DS9), Bodie and Doyle (Pros), Duncan MacLeod (Highlander), Nick Knight (Forever Knight), and characters from Blake's 7.

From an ad in 1995: "What do you do when the stories just keep coming and the page count crosses your estimate? Why add a second zine, of course. 4.5 will be available a few weeks after MediaWest (Memorial weekend). Within its pages you will find: Deep Space 9, Pros, Hardcastle & McCormack and Forever Knight. So, just when you've finished off that stack of zines from MediaWest, there's a new issue to add to your collection!"