Barb's Multi-FanPlex is Barb G.'s slash fanfic page. It was later renamed Barb G's Multi-FanPlex. The newer version of the site has the subtitle suffer-suffer-angst-angst-hurt-smooch-suffer.

The page is hosted by SlashCity. 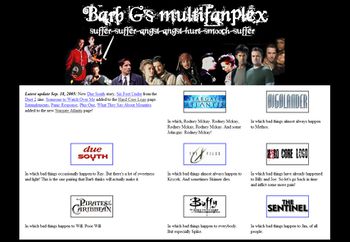 Return Home Ray comes home after Call of the Wild, alone, and can't figure out why his life is falling apart. Fraser is no happier where he is.

Staying Home A short PWP between Return Home and Taking the Bullet. What happens when the author can't be mean to her two favourite guys. (Author does not appear.)

Taking the Bullet Ray wants to try make-up sex, but between the three and a half bodies found, Fraser going covert, and the fisheries Minister, problems arise. What happens when the author gets over not being mean to her two favourite guys. (Author does not appear).

Candy From Strangers Ray and Fraser stop a minor crime on their day off, and it leads to a twisted and demented plot. I don't know, you try to summarize the story. I double dog dare you.

Whistling in the Dark A little story about a final good-bye. Not a death story. Well, it is a death story, but it's not like he wasn't already dead. Okay, I blew the super secret ending. Still, there's a moral to all this. Don't whistle at the northern lights.

Bump in the Night Fraser, Ray and a new type of ghost. Not a really nice story. Poor, poor Ray.

Hearse Goes By The sequel to Bump. Ray faces his decaying demons.

The Reflex Fraser and Ray find out what happens when you mix whisky, chocolate, and a wrong phrase or two. Fraser's father lets his opinion be known. This was my first Due South story. Yes, I know it's wrong. I'm sorry.

Any Port Sequel to Rum, Sodomy, and the Brand. What happens when you go hunting for Sparrows using live bait. 11 Aug. '03

Stake Out A single sentence over dinner and poof, Norrington behaving badly. Will makes a decision. Or at least, the decision is made for him. 1 Aug. '03

Return Home 32k. 18 Sep/05 John falls down, and gets rescued. One is worse than the other.

What They Say About Mounties 6k. 18 Sep/05 It all started with a moustache-twirling villain...

Changing of the Guard Krycek and the CSM disagree. Mulder has a gun. And Spender hasn't a clue. Bad things happen, surprise, surprise.

Match Made in Heaven Hard Core Logo crossover. Krycek meets Joe in the not-so-sweet hereafter. Warning, deathfic, kinda. Duh. (Spot the obsure Canadian movie reference in the summary, win a prize! Really? No, not really... but the reference is there.)

Retreat The CSM has Krycek summoned. Krycek at least gets his arm back. (No, not the one he lost in Russia. A different arm. Really.) Angst, angst, angst. What were you expecting, slapstick? Watch for the cameo appearance by a duck.

Guardian Angel First appeared in Ruth's brilliant Wounded Heroes magazine. This is a Mulder/Skinner story with a strong presence from Krycek. Warning: nasty stuff. Lots and lots of nasty stuff.

Bang for a Buck Krycek...Krycek wanted me to write this one. In fact, he insisted on it. You pretty much have to read it, 'cause if I tell you what is about, you're not going to believe me.

Cruel Kindness Krycek tastes the grass on the other side and then goes back to the smoker.

Tangled Webs Krycek practices to deceive, and gets darn good at it.

Rat In A Trap Krycek, the Well-Manicured Man, and nowhere to go.

E-Jerk Mulder and Krycek via email.

Gehenna Krycek and his ghosts.

Broken Glass Krycek goes with the wrong pick-up and finds how sharp he is when broken.

Building A Mystery (NC-17 m/m) M/K all the way. Mulder and Krycek in a night with no words.

Puppy EvilVamp!Willow and the Master play with Puppy.

Into Each Life First appeared in Futures Without End III edited by Melina Clark, elynross and Maygra. Methos finds out there's no more room inside of him than anyone.

Without a Sound Meaningless Methos angst. But the boys smooch, and hey, smooching boys. Smooching Methos. It's all good. But this story's, like, three years old, so you must forgive me.

Prometheus Bound This first appeared in Futures Without End II edited by Melina Clark and Maygra. Please don't link to or copy the illustration. A story based around Prometheus Bound.

Hormonal Adjustments by Proxy by Barb and devo. Jonathan and Pierre's relationship continues. MacLeod gets in touch with Methosian things.

Alternate Brothers (NC-17 [m/m] 50 K) Kronos, Methos and Richie, oh my! Set in the To Be/Not To Be Alternate Universe.

And the Winners Lose It All Down to the last two, and for Methos no one is the Winner.

Duncan and Methos Think About Buying A Car (NC-17)

The Messenger Slashminutes (NC-17 [m/m]) The minutes that we were not allowed to see when the episode The Messenger aired.

On A Pale Horse

The Hand Series (R to NC-17 depending on what part of the story you are in. DM/M)

Heat Stroke by Barb and Ophelia. Written several years back and recovered from the depths of Ophelia's hard drive. As close to HCL fluff as we get. It is too hot for young William and Joseph to sleep. Whatever shall they do?

Orpheus A mythological journey the Red Deer board of tourism does not want you to know about. Watch for the goat's cameo.

Match Made in Heaven X-Files crossover. Krycek meets Joe in the not-so-sweet hereafter. Warning, deathfic, kinda. Duh. (Spot the obsure Canadian movie reference in the summary, win a prize! Really? No, not really... but the reference is there.)

Pain Joe's thoughts just before the final shot of the movie. It doesn't end too well for Billy. (But we suspected as much.)

Bloody Footsteps Billy, the day after, finds Joe's attempt to recapture times gone by. He didn't do a very good job of it. Angst and blood and generally, a lot of unpleasant messiness. End of movie spoilers.

Graven Image A collaboration with Ophelia. Post movie and pre-band formation billyandjoe. Ophelia has a much prettier version version of this on her page, I'm just giving you the story itself. Enjoy.

China White Joe kicks the habit, Billy suffers with him.

You and Me The day before the Edmonton gig. (Billy/Joe)

Brothers in Arms A tragedy calls Billy home a year after the band splits up. (Billy/Joe)

Nine Points of the Law The boys have just started out. Billy and his mentor. (Billy/Bucky)

Pulling off his Wings Yet another that night story.

Someone to Watch Over Me Murder Most Likely crossover, sequel to Graven Image. Billy and Joe go on a road trip and meet a mountie.

Skinsgame: Jim and Blair and an undercover case that really isn't. J/B NC-17

Upstairs Downstairs: Jim and Blair and the distance between them. J/B NC-17 11/21