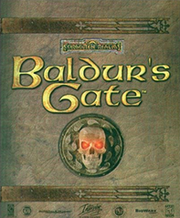 The Baldur's Gate series of high fantasy (sword and sorcery) computer role playing games is based on the Advanced Dungeons & Dragons rule set. It was developed by BioWare and published by Black Isle/Interplay. It consists of

This hugely influential series has been credited with single-handedly reviving the then-ailing computer role-playing genre.[1] This may be an exaggeration, since several other RPGs in the late 90s and early 2000s helped the cRPG renaissance along.[2] However, it certainly did establish Canadian developer BioWare's reputation as a preeminent western RPG creator.

Overhaul Games, a division of Beamdog (founded by Trent Oster and Cameron Tofer, both from BioWare), remade Baldur's Gate I and II for modern platforms in 2012 and 2013, respectively. These updates included bug fixes, new characters and areas, a new user interface, and increased modding capabilities.

To this day, the series remains a fan favourite with an active modding community, BG II in particular. This is in part due to its moddable (i.e., lending itself easily to modding) engine, the Infinity Engine, which is also used in the Icewind Dale series and the cult classic Planescape:Torment (both developed by Black Isle). This allows for cross-over mods like the (now defunct) Icewind Gate II.[3]

Mods come in any shape and size, from bug fix patches or adding new items [4] to romance options for NPCs (Non-Player Characters) like the Drow Solaufein [5] or insertions of new characters. As in fan fiction, the character creation and dialogue writing can lead to criticism ("angsty bisexual drows"[6] ) or accusations of Mary Sue.[7] Departing completely from both the main storyline and the D&D setting is also possible, as this WIP Silmarillion[1] conversion mod shows.[8] It is set in J.R.R. Tolkien's Middle Earth.
On a much lower level of customization, the Baldur's Gate games allow players to use their own avatar images and sound files for the PC (Player Character) as well as naming the main character. File collections of ready-made portraits and sounds [9] are widely available.

The series also familiarized many younger gamers who had never played pen and paper RPGs with the world of Dungeons & Dragons and the Faerûn setting.

Although the main story arc of the so-called "Bhaalspawn saga" had been concluded with the add-on Throne of Bhaal, a 'sequel'[10] was planned by Black Isle Studios, this time without BioWare's input, i.e, without the Infinity engine. Codenamed "Jefferson", it was to become Baldur's Gate III: The Black Hound, but in 2003 Interplay, Black Isle's mother company, ran into financial troubles, lost the Dungeons & Dragons license, and shortly after laid off all Black Isle Studios staff. The commercial project "The Black Hound" was dead.[11]

However, many former Black Isle employees went on to form Obsidian Entertainment[2]. Game designer Josh Sawyer, who had previously worked as lead designer on The Black Hound, now working at Obsidian, had retained access to the design documents. He decided to continue the project unofficially and on his own time, as a campaign module built with Obsidian's Neverwinter Night II tool set, that is, as a Neverwinter Nights II mod.[12] Although progress is slow, work has not been abandoned as of September 2008.[13]

It is important to note that J.E. Sawyer himself states clearly that The Black Hound is not a sequel to the Baldur's Gate series,[14] but Baldur's Gate fans are likely to make a connection between the series and the mod due to the history of the WIP mod and the company involved in the commercial Black Hound project.

As of December 2011, Baldur's Gate is currently eligible for Yuletide, a rare fandom fic exchange.