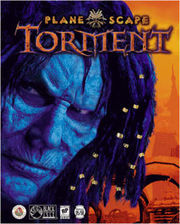 PS:T box art depicting its protagonist, the Nameless One

Set in the Dungeons & Dragons Planescape multiverse, PS:T departs from the standard pseudo-Middle Ages swords and sorcery setting of most cRPGs. Neither the unfamiliar setting nor the equally unusual cover art helped its sales, which remained unimpressive.

Since both critics and the vast majority of gamers who did buy it showered it with praise and love[1] it does have enough ardent and vocal fans to make it a genuine cult classic.[2]

Although there is no active fandom to speak of for PS:T, in the sense that relatively few fanworks[3] or mods[4] were created for the game, among cRPG fans its name has become a synonym for excellent, emotionally compelling storytelling in video game format.[5] The memorable and complex NPC companions are an integral part of its charm, and the game's central question, "What Can Change the Nature of a Man?" is legend.[6]

Still, the extremely text-heavy game (the accepted estimate is 800.000 words),[7] which focused on conversation over combat, was criticized for playing like an interactive novel and the linear gameplay of later chapters.[8]

Planescape:Torment appears on several "Best Video Games Ever" lists [9], and many blog posts, essays and retrospectives have celebrated its memory over the years.[10]. However, despite being a fan favourite, due to its relative commercial failure the game's actual impact on game development has arguably been minimal.[11]

In short, its significance lies in the fact that, despite having been released as long ago as 1999, it is still being used as an (unsurpassed) benchmark for RPG storytelling by fans and critics alike, and its mere mention will elicit squee or other visceral reactions of adoration from fans.

In February 2017, Torment: Tides of Numenera was released, which was meant as a spiritual successor[12], after a successful kickstarter campaign in 2013.

In March 2017, the Planescape: Torment: Enhanced Edition was released. [13]