After Shen Yuan dies in the real world, he wakes to find that he has transmigrated into the world of Proud Immortal Demon Way, a stallion or harem novel he hated (but nonetheless read all 1000+ chapters of).

As he awakens, he's cheerfully welcomed by The System, who tells him his "account" is now bound to the character Shen Qingqiu, the original villain of the novel. He realises he has to change the story to avoid being tortured to death by the main character, Luo Binghe. But The System has other ideas, not allowing him to act too out-of-character to avoid derailing the plot.

What follows is a delicate balancing act of Shen Qingqiu trying to stay true to his character while trying to ensure Luo Binghe has the happy ending he always felt he deserved.

A manhua adaptation was released on August 28th, 2019, but after the first three chapters were released, the manhua was pulled and put on hiatus for unknown reasons.

Almost all pairings shipped in fandom are slash.

SVSSS is relatively popular in exchange fandom where it frequently receives nominations and has fic written for it. In 2019 it was nominated for Yuletide, which requires fandoms to have less than 1,000 fics across Archive of Our Own and fanfiction.net that are complete, in English, and at least 1,000 words. The novel won't be eligible for Yuletide 2020, but the donghua likely will. 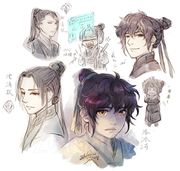 There was a youth wearing black clothing, carrying an unadorned long sword on his back. His face was like jade, and his eyes like cold stars glittering in two deep pools as he strolled closer. He had grown a lot and his temperament was also substantially different compared to before, but … this face that could grace the cover of a romance novel from any angle … even if he was beaten to death, Shen Qingqiu would never mistake it!Chapter 32, BC Novels Translation

Binghe isn't given a detailed description in the novel and fanartists have put their own twist onto his appearance. One notable feature of the English-language fandom is a prevalence of Luo Binghe with curly hair, possibly originating in this post by zeldacw.

A popular fanart depiction of Binghe is as a puppy, named as Bingpup, as his character is easily compared to a loyal puppy to his master, Shen Qingqiu.