Syndicated Images is a gen multimedia fanzine. It was printed in Australia and was edited by J.J. Adamson.

It was edited by Jane of Australia, and all of the fiction is by Jane using different pseuds.

There are eight issues. 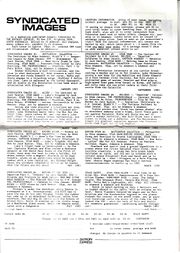 This zine series is Entropy Press' first publication. While the first issue of "Syndicated Images" has a publication date, one of the press' creators cites "Entropy Press'" beginning as late 1984.[1]

From the editorial in "Syndicated Images" #1:

The concept of this zine came out of writers' and artists' frustration: OK, you've written a terrific story, what are you going to do with it? Few zines could handle an entire 'Enter the Dragon' spin-off or a 'Raise the Titanic' opus: but 'Syndicated Images' can! Of course we're here to feed favourite subjects to fans, hence the content of this pilot issue where you'll find most of the big favourites at one time. But the beauty of SI is that it's not tied to just a few film/TV sujects. Each issue will feature the big favourites: BSG in most issues, SW, ST, B7 and The Professionals likewise, and there will be stories set in the universes of Gerry Anderson each time, too. But we can stray further afield: In SI#2, there's an Alien prequel adventure, in #3, a hard-hitting Knight Rider tale, in #4, a crash-and-burn Mad Max 2 story and from there we go on to Conan, James Bond, Dr. Who, Mad Max 1, HHG and even the Persuaders, Beastmaster and the aforementioned 'Dragon' and 'Titanic.' There's so much more, even we are amazed... We have enough already to pack eight or ten issues. And here's where we need your help... To do an on-going zine means a lot of work, and in turn, this means a minimum number of readers has to be reached... If you enjoy this zine please tell your friends. We're closing some blow cards for you to send to them...

When Entropy Press first came into existence in late 1984 it was with the launch of the media zine SYNDICATED IMAGES. SI was devoted to many subjects, the fannish mainstays appearing regularly, supported by unusual stories from the more obscure parts of fandom. This was perhaps its biggest mistake: it was too varied.

In a long, long personal statement in 1986 that was printed in Universal Translator #32, Jane of Australia said Entropy Express was closing down shop due to zine piracy:

It's very sad when fans start to prey off one another: It's true that we all prey on the licenced copyright holders, but producers and fans have come to a sort of understanding, and we thought the understanding between fans themselves was very clear: when piracy raises its head, fandom comes unglued, and if we don't have ethics, we've got nothing ... The photocopier and the SLR camera are the fan producer's worse enemies. We at Entropy are trying to market a range of high quality zines and telepix, and it's recently been brought to our notice that the main reason why our sales have been so poor is that our potential customers in the USA are obtaining copies of both our zines and our photos from ... somewhere. It must be understood that any zine's 'next issue' depends on the financial returns of its past and current issues. When the editor has boxes of unsold copies but the customers have all got pirated copies — there isn't going to be a next issue. This the state of affairs with SYNDICATED IMAGES. It gets rave review, but we literally can't give it away. We're not even asking who it is who's responsible for sticking our zines on the copier for friends [and] releasing the stories onto the circuit . . . but we'd like to say this to them: Congratulations. SI just closed up shop at #8, and unless we sell the mountain of copies we've got in the boxes (which is to say, if they can be kept off the circuit and interested parties purchase the zines instead of bags full of loose copies from Blackbeard Productions), SI9 will never happen. It was going to be a beauty, like #10 after it, but we know when we're licked. You pirates have killed the zine stone dead; when SI8 is available, in about ten days' time, and you've pirated that, there won't be anything else for you to pirate. To the people who own our zines in their pirated form, we'd like to add the following: we're not blaming you. How were you to know that the stories were not cleared for circulation, and that the publishers have heaps of unsold stock? But if you come across the works of the following authors in circuit-story form from this point on, you know that they are the wares of rip-off merchants: Adam Jenson, Jack Heston, Jane Sterling, Peta Brock, G.W. Conrad, Mike Adamson. These writers appear only in SI, and since all our issues are still in print, none of them are cleared for the circuit. To the people who are copying/selling our telepix: do you really think a photographer can't recognise his/her own work? Imagine the shock when you open a zine and find it illustrated with a Xeroxed enlargement of a photo for which the supposedly unique negative is in your own file! There's nothing we or any other photographer could do about this: copyright is a laughing matter when someone has a 35mm camera and a set of CU filtres... [2]

I think that the lending libraries do a great service to those like myself who are late to fandom, or for those who have read almost everything and need a new source to feed their habit. I do object to the informal circulating of zines that have not yet gone out of print as this practice seems to have killed an Australian media zine I greatly enjoyed, Syndicated Images. [3]

I've seen Syndicated Images's impassioned editorial about the circuit ruining his business (I bought my copy, incidentally), and while there may be a grain of truth, I'm dubious that a Pro's, and essentially B/D, circuit is entirely responsible for stifling a zine which is mixed-media, less than 20% Pro's, and not B/D at all. He's continued with an all Pro's zine, I notice. But do try to apply a soupcon of conscience to zine-copying of in-print zines, folks. I do agree with the principle. [4]

I've just been informed that a zine called SYNDICATED IMAGES out of Australia was running the ad for the Library - as far as I can remember, without permission. Would the editor/publisher(s) please drop the ad? Thanks. [5] 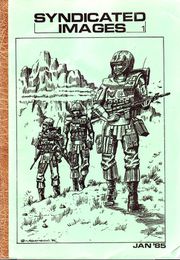 Syndicated Images 1 was published in January 1985 and contains 52 pages. 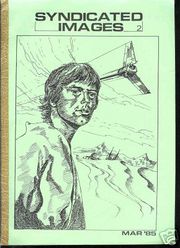 Syndicated Images 2 was published in March 1985 and is 47 pages long. 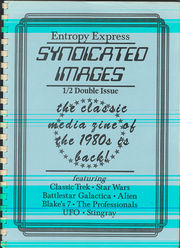 cover of the combined issue 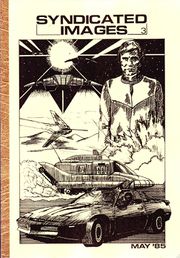 Syndicated Images 3 was published in May 1985 and contains 50 pages.

Syndicated Images has been well recieved and very kindly reviewed... everyone who has bought it seems to have liked and enjoyed it. The problem is that very few people seem to want to buy it! We've done heaps of advertising, but as yet the subscription list is woefully short, and only the fact that we do a lot of trading makes that list look half way decent... We were warned before we began that fanzines are hard to sell these days, and that seems to be true.... We can do everything but force people to buy. So, we've decided not to look beyond SI#6, that will be the Nov/Dec issue... what a pity it would be for SI to end that way... 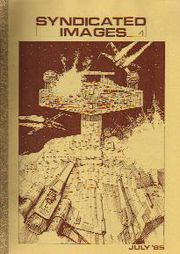 Syndicated Images 4 was published in July 1985 and contains 49 pages.

We seem to be selling less copies than ever, and unless something happens, this zine is doomed. We've done so much advertising you wouldn't believe, for a bewildering result. Let's put it this way: our circulation would have to triple by #6, and we're typing #5 now, or it'll have to be done mimeo...

Is there anyone out there who remembers something called Syndicated Images? That was the one that started it all... In late 1984 a small press called Entropy Express was launched to publish a multimedia zine carrying a selection of favorites of the day, and over the following two years or so eight issues were released. Some years ago the first two were rereleased under one cover as a special, including any rewrites the authors cared to make, plus new art by moi and a completely new DTP typeset and layout. This was one of the titles Bill Hupe handled, and according to him we sold only a tiny handful. It so happens he sold a large part of the print run and pocketed the cash, which effectively meant that the 3/4 double issue already in planning never happened. [6]

Syndicated Images 5 was published in 1985 and contains 48 pages. 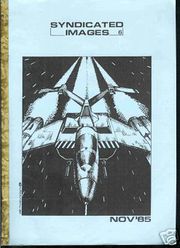 Syndicated Images 6 was published in November 1985 and is 57 pages long.

Syndicated Images 7 was published in 1986 and is 52 pages, included blue paper covers, tape binding over staples. Content list is incomplete but it contained a review by Brian Cotter of the fanzine "'Prime Attack' by Mark Lang".

Syndicated Images 8 was published in 1986 and contains 80 pages. It contains stories from Battlestar Galactica, Star Wars, UFO, Star Trek: TOS, Star Wars, The Professionals. It contains a story by Adam Jenson, "End of the Rainbow" - there is some dispute as to whether this is Blake's 7 or not. [7]

[From 1999]: ... we've stepped back and reassessed things, and now we're looking seriously at picking up where we left off, not with the rerelease of the early material (though we'd still love to do that in due course) but with the brand-new, fully reincarnated Syndicated Images, kicking off at Issue #9, and at the same size as our standard zines today. The line up? How about a Whitesword Xena: Warrior Princess adventure; a major seaQuest DVS epic following from the catastrophic conclusion of Season 1; what about Arthur of the Britons, a cult favorite for many? We got it! And we even have the good old Professionals, in both their classic form, and an entirely new and fascinating form — not, I hasten to add, the essentially crappy new version of the show that's been filmed, but the genuine article... Just an amazing new take! And there are so many terrific new shows, we're recruiting material for La Femme Nikita, Sentinel, ST:TNG and others. Stay tuned — we'll post the news as it breaks. [8]