Flightpath is a gen UFO anthology.

From the publisher: "After a hiatus of some years, Entropy Express returns with a new format. Instead of small zines which restrict the development of stories — bigger zines mean more and better stories. Rather than a mixed-media zine doing marginal justice to a group of topics, we devoted more than double the pagespace of our old zines to just one program, so the fans of individual shows need not buy a whole zine for only a portion of its contents.

The Last Issue Was Besieged by Problems

Issue #7 was first late, then altered.

Bill Hupe's gafiation was one reason for the delay. See more below.

Another snarl was a cease and desist letter regarding one of the stories in the zine, one that does not appear in later reprints. See more below.

Flightpath 1 was first available mid-June 1991 and contains 170 pages. Three of the stories appeared six years previously in the original release of Syndicated Images and are presented here in rewritten form, with new illustrations and new typesetting. One of those stories is Widowmaker. Another is Friends and Traitors. It is unclear what the third story is; perhaps it has a different title. 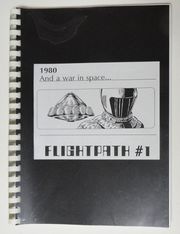 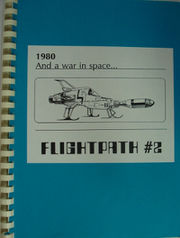 Flightpath 2 was published in late October 1991 and contains 170 pages. 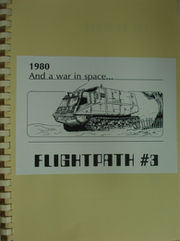 Flightpath 4 contains 160 pages and was published in April 1993. 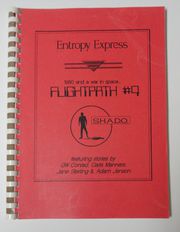 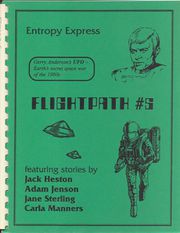 The original issue of this zine is not the same as the reprints due to a cease and desist letter regarding the story "The Siam Sanction" by Sara Lansing:

And now on to something right off the wall!

Fandom exists on the tacitly-approved use of professional copyrights: how can it be anything else?? It went through the courts 10 or 15 years ago, and copyright holders essentially agreed to turn a blind eye so long as fandom was a non-profit enterprise.

So imagine our surprise when we were contacted out of the blue by a firm of lawyers with instruction to "modify our content."

Mike, as editor of Entropy Express, was contacted by the New York attorneys representing the widow of the late Don Pendleton, creator of the bestselling "Mack Bolan" series of adventure novels. FLIGHTPATH #7 featured a story by Sara Lansing (The Siam Sanction), which crossed Gerry Anderson's UFO with Mack Bolan. Probably a web search had brought to the attention of the attorneys the flyer for FLIGHTPATH #7, and they detected what they deemed the unauthorized use of the Bolan copyright!

They were entirely within their rights, in terms of their brief to protect Mrs. Pendleton's livelihood, to police the use of the copyright, and while they were by no means unfriendly, they were quite resolute that the story must be withdrawn immediately.

As editor of Entropy Express, Mike was most happy to accommodate them, and wrote instantly with an explanation of the position of the fannish editor, with regard to the legal deliberations many years ago, and stressed that no violation of copyright was intended, and most certainly no profit accrued. It was also explained that, for the most part, today in the TV and movie community, fandom is viewed not as violation of copyright but as free promotion and popularization of a patented product.

The attorneys were happy with the immediate withdrawal of the story and the matter was left at that. Of course, this left Mike as editor with the task of finding a replacement story to be built into future copies of FLIGHTPATH #7, and which may be issued in chapbook form to anyone who missed it previously.

It's a great tragedy that Sara's story can no longer be seen. We felt it was one of the most ambitious and imaginitive [sic] stories ever to appear in FLIGHTPATH. Meanwhile, Sara has voiced the possibility that Bolan may easily be replaced within the narrative, with minimal re-writing, with John Rambo instead! It remains the crossover piece of the issue, and sidesteps the problem.

So, as you can see, it hasn't been all beer and skittles here at the madhouse ... you wondered why we called it Nut Hatch??? Seriously, the stresses involved with running the fannish press are escalating, and the COSTS involved are getting out of all proportion.[1]

One reason given for this zine's late publication:

Flightpath #7 should have been released two years ago, but with the demise of Bill Hupe's US distribution network we lost touch with something like forty core fans of UFO, and this meant our print run had become impracticably small. So, with great regret, FP7 was put on the shelf about three quarters complete. It's still there, and we'd love to get it down and publish it, so ... if you're by any chance a fan of UFO, or one of our old US readers who bought through Monsieur 'upe, why not drop us an email at avatar@senet.com.au and let us know you're interested? A blank email with "Flightpath 7" in the message line will be fine. When we have enough expressions of interest, we'll email you the price and shipping details, and FP7 will be completed and released forthwith! [2]