Do you often sleep with the lights ON? Do shadows follow you down dark and lonely streets? Have you ever heard voices or been summoned to graveyards in the middle of the night? Do you crave stories from the flip side of the supernatural? Then this zine is for you. Hysterically funny. Deadly serious. Everything you never wanted to know about the afterlife, and then some.

Everything you ever wanted to know about the afterlife and then some. Stories include: "Peter Venkman, Phone Home" by Sheila Paulson, "The Brand of the Serpent" by Cindy Rancourt, "Innocent Wishes and Christmas Spirit" by Barbara Pyles and more. Art by Rolaine Smoot.

Verdict: a rocky first issue; one story in particular could not suspend my disbelief due to insufficient research. [1]

Slime Trails 2 was published in 1993 and contains 122 pages. Front cover is by Rolaine Smoot; back cover additions are by Eddi Fey. Interior art is by Eddi Fey, Suzie Molnar, Joy Riddle & Rolaine Smoot. 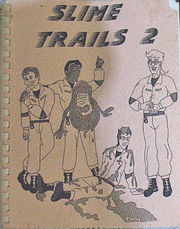 Ray has been kidnapped by an alternate universe baddie and the guys race to rescue him, but they have to release a very nasty demon from the containment unit to do it: this story is a must read, it's almost novella size. The guys go on a call to capture a ghost fly. Harmless? You be the Judge. Be careful when you buy old fairy tale books at used book store, some of the stories can be deadly serious. Ray finally finds the girt he's always wanted, but is she a dream date or a dud? Peter found himself possessed of more than a smart mouth, but it's the aftermath that's the killer. The stray cat the guys picked up seems bent on killing Ray-- or is it a cat?

Verdict: the last story in zine is dark with mature themes. Very good, but not for people in search of light entertainment. [2]

Slime Trails 3 was published in 1994 and contains 132 pages, six stories. Front cover is by Rolaine Smoot and back cover is by Eddi Fey. Interior art is by Marty Siegrest, Eddi Fey, Joy Riddle & Rolaine Smoot. 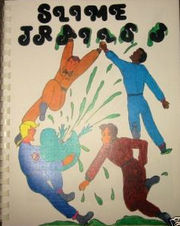 Mary Robertson's Brownie in the Basement is an interesting little gem.

Verdict: a good third effort, with a wide variety of writing styles. [3] 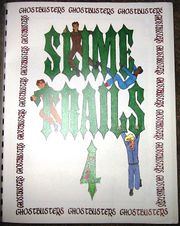 Slime Trails 4 was published in 1995 and contains 121 pages. Cover art is by Rolaine Smoot and back cover is by Eddi Fey. Interior art is by Marty Siegrest, Eddi Fey, Joy Riddle, Sheila Schneider & Rolaine Smoot.

Julie Jay's F.Y.I. or Bust has the the guys bust ghosts for Murphy Brown... will Peter survive coming up against someone as abrasive as he is?

Verdict: some fluff, some drama. Recommended for those in search of variety. [4] 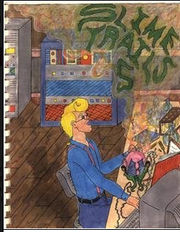 Slime Trails 5 contains 124 pages and was published in 1996. It required an age statement due to the X-rated story "And Winds Will Rise". Cover and back cover art is by Eddi Fey; interior art is by Eddi Fey, Rolaine Smoot, Marty Siegrest, Joy Riddle & Sheila Schneider.

Summaries are from Media Monitor #34:

Julie Jay's How Much for Just the Coffins? is a delightful romp, while Debra Hicks' And Winds Shall Rise is much darker, and more intricate. Also contains the first RGB/Pinky and the Brain story!

Verdict: For audiences that can deal with silliness and mature topics in the same zine. Contains romance stories. Age Statement required [5] 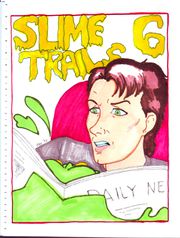 There is a delightful epistolary story focusing on Ray, but there is also a romance-h/c story that I thought needed to be tightened.

Verdict: uneven. The hurt/comfort stories are not to my taste. Contains romance and crossover stories. [6] 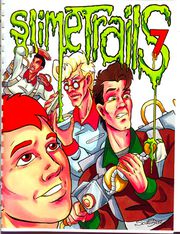 cover of issue #7, Sandy Schreiber: "Yeah...I did a lot of covers. At some point, 'zine editors went to just using photo-montage covers, using art from the show....not as much fun as original art, in my opinion. I just love the expressions they all have, reacting to the slime in their own ways....can't get that in a frickin' photo montage..../end bitterness/ Watercolor on board. Hand lettered." [7]

Verdict: uneven; contains a gender-switch story with (to me) slash overtones that has become somewhat notorious in RGB-fandom. Contains romance and crossover stories. [8]

Slime Trails 8 was published in 1998 and has 154 pages. Cover art is by Gina Dela Concha; interior art is by Joy Riddle and Eddi Fey.

Verdict: bad formatting made my copy nearly unreadable, as there were often no paragraph breaks, mispellings, cramped lines, and obvious errors like author's comments throughout the zine. Avoid unless the formatting has been corrected. What was readable was not to my taste at all, being either too much hurt/comfort or wildly different from my preferred interpretations of the characters. [9]