Scoundrel 7 (v.2 n.7) was published in summer 1985 and contains 70 pages. It has illos and cartoons by Nancy Stasulis, Suzy Sansom, Barbara Kreuz, and Peggy Dixon. 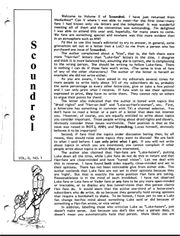 first page of issue #7
* a fan writes of the things in-between and of assumptions:

One of the ideas that seems to surface frequently, is what I call the 'Black doesn't mean black in the SW universe'. My reaction to that is...well, perhaps it doesn't, but... It seems to me that, as an American, George Lucas grew up with those values. Now, while I realize that there have been other influences on him, including the study of myths, etc., you need some sort of stepping stone upon which to build. So, while black may mean 'more than' black, it's just as easy to start with a well-known, easily understood concept and build from there. (In the first film we do have the typical division of: White/Good/Luke-Leia; Beige-Brown/Neutral/Ben; and Black/Bad/Darth.) I grant that in later films and in reviewing the original, we are given the grounds to question those concepts, but the original viewings of the first film works with standard archetypes. Besides, you need some kind of standard or we would have to view the film and question: 'Are Luke and Han male? Leia female? Could it be that droids rule this land? Just because we view Tattooine as a desert, does that mean families there don't have swimming pools?' What I'm really saying is that you have to start somewhere in order to have any idea of what is going on! 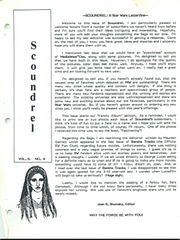 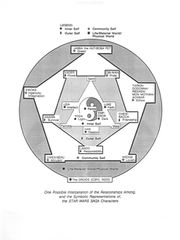 helpful graphic for the article "The Quantum Leap of Star Wars"

Scoundrel 9 (v.2 n.9) was published in 1986 (most likely spring) and contains 57 pages. It has illos by Maggie Nowakowska, Barbara J. Kreuz, Suzi Sansom, and Ronda Henderson. 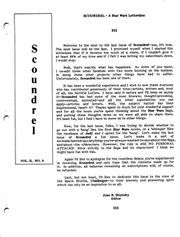 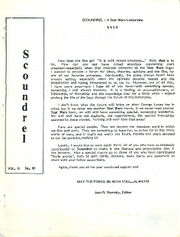 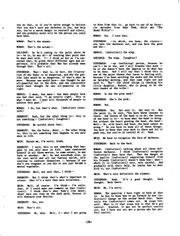 sample page from a panel discussion transcript from MediaWest #6

Scoundrel 10 (v.2 n.10) was published in fall of 1986. The submission deadline for the last issue was August 1986. This issue contains 13 black and white photos (taken at MediaWest 1986) of the fans who contributed to the letterzine over the years.