Sapphic_HP was a Harry Potter archive that hosted fanfiction as well as essays and resources pertaining to femslash. Its name comes from the association of the Greek poet Sappho with contemporary lesbian relationships and culture.

The site went offline around early 2009, but many of the stories can still be accessed via the Wayback Machine.

Shortly after the archive's public launch, its founder, Duckling, was interviewed by an affiliated site, The Quidditch Pitch. She explained:

I wanted to set up an archive of really good stories because basically there wasn’t one. (Although there is a great femmeslash archive – Girls Dormitory – it’s one that anybody can submit to and as a result you often have to search through a lot of rubbish to find the really good fics.) I also wanted the site to serve as a writers’ resource in the hope that it might encourage the production of more quality femmeslash stories.[1] 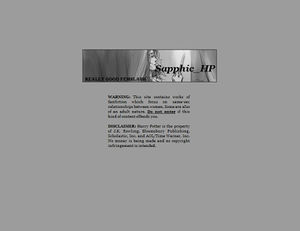 The archive was "fairly selective" and had "a focus on high quality stories." It was started by the founder emailing the authors of her favorite femslash stories for permission to archive their fics, and only later accepted submissions.[1] It also hosted essays about femslash and femslash pairings.

It accepted stories of any rating and (female/female) pairing, including threesomes where one participant is male.[2] It also allowed het or (male)slash content "so long as a femslash relationship is still the story's main focus."[3]

The site provided a list of beta readers that were willing to proofread stories. It also listed the betas' specialties and restrictions (in terms of the pairings, ratings, and squicks they were willing to read). Betas included Duckling, Blue, and Melacka.[9]

The site had lists of various challenges and plot bunnies for inspiration. Challenges were posted by pairing, and included: