Ink Stained Fingers is an all-slash fan fiction and fanart archive for the Harry Potter fandom.

The archive is maintained by Diana Williams and uses Automated Archive software. As of April 2012, it contained 3,342 stories and over 100 works of fanart. In January 2015, it was announced that Ink Stained Fingers would be moving to the Archive of Our Own as an Open Doors Project.[1] The import was completed in December 2016.

Ink Stained Fingers was created by members of the Snapeslash mailing list who were looking for an archive that would allow any slash pairing, any rating, any content. The name, artwork, and layout were created and voted on by members of the list in 2001. 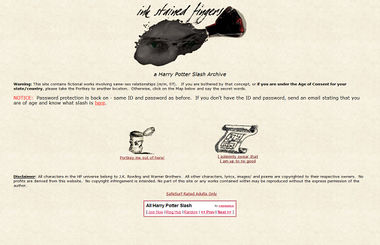 This archive is a group effort, brought about by the talents of many people. The Snapeslash list members kicked it off by complaining about FF.Net, and Lisa started the HPArchiveteam list to work on a solution. Many, many people contributed time, ideas, and/or funds for the Archive project, and it was truly amazing to see an archive of this scope come together in less than a month. In particular, credit goes to Lady MacBeth and Mouse for their graphic designs (Mouse did all the hand-drawn work and the titles, in particular). Boadicea and Diana Williams worked on the web page layouts, with input from all the Team members. Taleya did the initial work on the posting interface, which was then customized by Titti, to whom we owe a great debt of gratitude: she worked through the interface, patiently dealing with the suggestions/pleas/demands of the Ink Admin group. (Your chocolate-covered Snape is on its way via owlpost.)[2]

In April 2012, a post at the archive's LiveJournal account sought opinions on whether it was time for Ink Stained Fingers to close to new submissions (though the archive will remain online regardless).[3]

In December 2014, it was announced that Ink Stained Fingers would be moving to the Archive of Our Own as an Open Doors Project.[4]

The archive accepts all fanfiction and fanart whose main pairing is slash, femslash, or pre-slash. Het pairings are allowed only if they are secondary or background pairings. The only other content restrictions are that stories must contain at least one character from the Harry Potter universe and RPF is prohibited.[5]

Authors of fics hosted on the archive are required to be of age (regardless of the stories' ratings). Beta readers are encouraged but not required, but authors whose stories consistently contain poor spelling and grammar "may be required to work directly with an archivist/editor instead of using the posting interface."[5] Authors found to have plagiarized are banned from the site.

Works uploaded to the Automated Archive archive could be categorised and searched using the following types, ratings, warnings, characters, pairings and categories:

The page is a member of the All Harry Potter Slash webring.