Pornish Pixies quickly gained in popularity: "At approximately 12:45 p.m. on the 26th of May 2004, Pornish Pixies hit 1000 watchers. Yes, that's right--one thousand people were now watching our community, only six months after its creation."[1]

In 2007 Pornish Pixies was suspended from LiveJournal during Strikethrough and, after their account was restored, went friends only in an attempt to protect themselves from LiveJournal censorship. Eventually, they moved to InsaneJournal since the owner there, Squeaky, had publicly stated accounts would not be suspended for content.

The Pornish Pixies masterlist was located at GeoCities until GeoCities's closure in 2009. The site did not archive any of the work, but linked to the posts on the LiveJournal community.[2] The site was maintained by switchknife.

This site is documented here as part of the OTW's GeoCities Rescue Project. 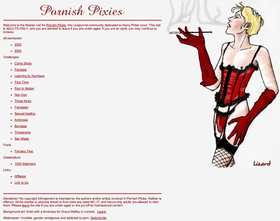