From Fanlore
(Redirected from POWER OF SPEECH)
Jump to: navigation, search

Power of Speech is a Star Trek: TOS and multimedia letterzine. There were three issues.

From "Southern Enclave": "Power of Speech, a new ST/media letterzine with absolutely no censorship and devoted to civilized controversy is ready to go to print. Price not yet finalized. First issue includes articles and discussions on the Vulcan katra, the Vulcan wars, the Jedi, Blake's 7, the Professionals, analyses of the ST films vs. the series and lots more. Guaranteed to exercise the brain."

From another ad in Southern Enclave: "POWER OF SPEECH is a ST/media letterzine dedicated to the uninhibited right of free fannish expression. Civilized controversy is not only welcomed but actively sought."

This is one of the finest letterzines I have ever had the pleasure of reading. Sandra has left the subject matter open, but it is mostly ST with some mention of Blake's 7 and The Professionals. PoS has some interesting contributors and a fascinating array of discussion material. The biggest problem Sandra has to face is that she doesn't have enough contributors; there was almost a year between issue #1 and #2, she had so few LoCs to work with. PoS has my highest recommendation, and you should latch onto a copy and send in a LoC as some as you finish with them. [1] 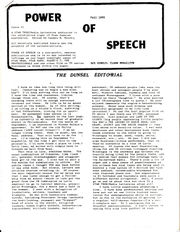 Power of Speech 2 was published in summer 1986 and contains 25 pages. 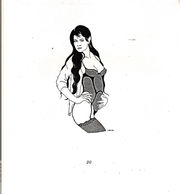 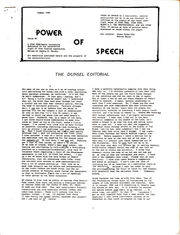 From Boldly Writing: "Sandra said in her editorial, 'The delay in getting this out was largely a lack of submissions!' She also said of the previous issue, 'I knew that I had put in too many editorial comments in the middle of the LoCs.' This time, Sandra inserted her editorial comments at the end of her publication." 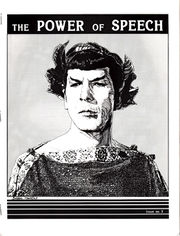 Power of Speech 3 contains 44 pages was published in summer 1987. It was the last issue.

"Anatomy of a Letterzine" takes a look "at the letterzine know as 'Bennett's Tenets,' also known as 'The Harve Bennett Fan Club Newsletter,' or, as it is more commonly called, Interstat". The review takes Interstat to task for two things: one, its "gnashing of teeth, the raking of claws, and the lashing of tongues -- not to mention the backbiting, mudslinging..." and two, the reviewer's belief that it is nothing but a censored rag dedicated toward TPTB.

Excerpts from "Anatomy of a Letterzine" by Kristen Brady:

Mr. Bennett's continued interest in the goings-on of the fannish community -- as evidenced by his occasional letters to Interstat -- is the proverbial monkey wrench in the works. The knowledge that 'HB' will be watching casts a entirely new light on the subject, and the subscriber's letters, which once might have started out as an attempt to reach out to new fans and perhaps talk a little Trek, suddenly take on a very personal and a very immediate importance as each tries to impart his or her own personal vision of the essence of True Trek to one in a position of power. It then becomes of paramount importance that these personal visions not be marred or sullied in any way, in the eyes of HB. In this context, any opinion contrary to the author's own personal conception of Trek is taken as a personal attack, and by the same token, if an author wants his/her own beliefs to stand, it often becomes necessary to tear down those of others. Gone is the forum type of atmosphere one would assume of something called a letterzine. Gone is any give-and-take if opinions, any exchange of ideas; the atmosphere of Interstat is quite unmistakably that of competition. The goal is, I think, for each participant to try to get his/her particular vision to be the one that HB selects and possibly incorporates into future Trek projects...