You may be looking for Outlands, a Blake's 7 zine.

These zines were "published and edited and illustrated by Barbara-Fister Liltz," and "prepared by Judith Boguslawski for Pandora Publications." 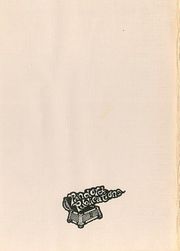 back cover of issue #1, aside from the color, all the back covers to these zines are identical

From the Submission Flyer 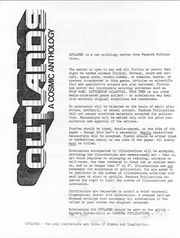 Outlands is a new anthology series from Pandora Publications.

The series is open to any and all fiction or poetry that might be termed science fiction, fantasy, sword and sorcery, space opera, cosmic-comedy, or romance, horror, or mystery interpreted in this genre. Articles on scientific fact and speculative science are also welcomed. Fiction and poetry may incorporate existing universes such as STAR WARS, BATTLESTAR GALACTICA, STAR TREK or any other media-orientated genre subject - or submissions may deal with entirely original storylines and characters. No submission will be rejected on the basis of adult situations, profanity, or sexual content. Pandora Publications will not censor submitted materials accepted for publication. Manuscripts will be edited only with the prior consultation and approval of the writers. Stories should be typed, double-spaced, on one side of the paper - though this isn't a necessity. Neatly handwritten manuscripts will be accepted. Poetry should be either typed or handwritten neatly on one side of the paper. All poetry must be titled. Submissions accompanied by illustrations will be accepted, providing the illustrations are camera-ready art - that is, art which requires no enlarging or reducing, contains no half-tones, has been rendered in black ink or similar medium, and is no larger than 7" by 9". Illustrations are not necessary for acceptance or publication. You are asked to be judicious in the number of illustrations submitted with each poem or story or article. Pandora Publications re serves the right to limit the number of illustrations per submission.

Contributors are requested to submit a brief thumbnail biographical sketch with submissions. A stamped self-ad dressed envelope must accompany all submissions if the writer or poet wishes the original returned.

After the second Star Wars movie was released, many of the fans who shipped Han and Leia imagined their first sexual encounter happened on Bespin. See Slow Boat to Bespin for a story that had a part in the 1981 Open Letters to Star Wars Zine Publishers by Maureen Garrett.

One example of a fan's speculation is Joan Shumsky's notes for "Bespin" in "Outlands" #1:

Ever since TESB was released speculation among fen has run rampant... did they or didn't they...and, if they did, WHEN, WHERE AND HOW??? The conjectures provide enough material for at least 10 doctoral dissertations! This has become the most asked question since everyone wanted to know "Who shot J.R.?"

My pet theory, however, is that "IT" did not happen aboard the Falcon, but on Bespin! Think about it...Han and Leia endured countless harrowing experiences from the time the Imperial Forces discovered the base until they made their escape amidst Vader's garbage. I think you'll agree that by this time they were pretty much wrung out...emotionally, as well as physically and however tempting an evening of "fun and games" might seem, what they really needed was a good night's sleep...alone!

Further, in a galaxy where space travel is so common, I think time is relative. Without the aid of a hyperdrive system, one day might be considered a "long" trip. I therefore postulate that it took them no more than two standard days to reach Bespin. What follows then is my version of WHEN, WHERE AND HOW "IT" happened...that is, if our travellers had arrived at the Cloud City at dusk...instead of at dawn.

Outlands 1 was published in spring 1982 and contains 44 pages. 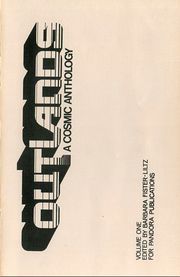 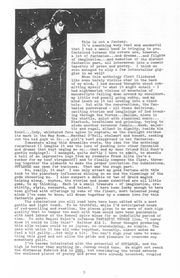 The editor's acknowledgement: "For the men of my fantasies, who make my life a little more real: Apollo, Boomer, Dallas, Deckard, Foster, Francis, Han, Hawk, Indy, Lowell, O'Neil, Snake, Starbuck, Superman and most of all, Zed.... For the men of my life, who've made reality as beautiful as any fantasy: Alan, Bill, Geoffrey, Robert, Thom, and for you, Frank... With all my love."

This is not a fantasy. It's something very real and wonderful that I had a small hand in bringing to you. Contained between the covers are, however, a lot of fantasies...and dreams...and flights of imagination...and memories of the distant fantastic past, all interwoven into a cosmic tapestry of prose and poetry. I think we even managed to slip a few interstellar giggles in as well!

When this anthology first flickered like some barely visible star in the back of my mind, I had second thoughts about committing myself to what it might entail - I had nightmarish visions of mountains of manuscripts falling down around my shoulders, my little red pencil going nubby, and my mind (such as it is) eroding into a black hole. But with the reservations, the fantasies persevered - all those delicious, exciting stories and imaginings of Zed breaking through the Vortex...Dallas, alone in the shuttle, quiet with classical music... Starbuck, breathless and grinning, trying to elude another ravenous female...Hawk, majestic and regal, silent in dignity, beside his Koori...Indy, whiskered face aglow in rapture, as the sunlight strikes its mark in the Map Room... Marshal O'Neil, stalwart and honest, seeking out the bad guys on Io...a girl's best playground is her fantasies. Somewhere along this dreamlike route, the idea for the anthology resurfaced (I imagine it was the lure of peeking into other fantasies and dreams that kept urging me on...that and my dear friend Bill Hunt's gentle nudgings). I managed, quite deftly I have to admit, to wheedle a hell of an impressive logo from my roommate Frank Liltz {he's a sucker for my beef stroganoff) and to finally compose the flyer, throwing together the elements to make the proper invitation for submissions. OUTLANDS was open for business. That was the rough part. No, really, it was! I can only attest my good fortune with this book to the planetary influences shining on me and the blessings of the gods showering me. I also suspect a dabble or two of Druid magick helping along. Anyhow, the stories and poems submitted are all little gems, to my thinking. Each is a small treasure of imagination, creativity, style, research, and talent. I have been lucky enough to have been gifted with offerings by some of the finest, most talented young minds I've come to know, all drawn together by a common love for this fantastic genre. The submissions you will read here have been edited with a most gentle and light touch. To be truthful, while I'd anticipated hours of red-penciling and rewrites, the pieces given to me were of such high quality that to tamper too much with them would have been punishable with hard labour at the Kessel spice mines for an indefinite period of time...

Consider this your starship: you can travel wherever your mind wills, you can take along beings and characters imagined and already created in the media - and you can take all of us with you too -- fellow travellers in space and time, we have no boundaries and are totally free... Remember - the only limitations are those of dreams and imaginations.

Outlands 2 was published in fall 1982 and contains 44 pages. 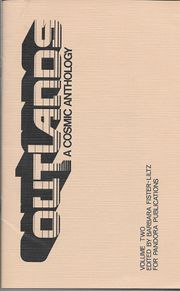 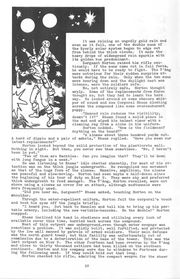 [The entries for issue #2] are seasonal in many ways.

While trying to sort out the order the poetry and stories would take in this second volume of our anthology, I was immediately struck by the fact that each had the flavour of a season about it, either in feelings or emotions, in the topic, or the actual time of year. It was especially gratifying for me to be able to present the enclosed delights from some extremely gifted people as a complete cycle of seasons: spring giving way to summer, summer languishing into autumn, autumn dying into winter, winter giving birth to spring. A sense of completion, of whole-ness--wonderful! To echo what I said when prologuing the first edition of OUTLANDS, I've been very fortunate—the Lords of Kobol are watching out for this mortal, that's for sure.

In spring with the advent of the first issue, I advised you to consider this your starship, and happily, some bright and creative people took up that invitation and have guaranteed you some terrific reading, some excellent food for thought—regardless of your mood, the state of the world or your affairs, or the weather outside your mundane little window. Sadly, I must report that once again OUTLANDS has resulted in an all-female crew on this venture. Anyone who knows me, knows my strong feminist commitment, but more so, I've always been strong on people power-that, well, maybe just a comp. copy of the anthology and some editorial stroking, but still and all, really, fellas, OUTLANDS is looking for a few good men—so let's hit those typewriters and start writing already! I expect some masculine contributions when OUTLANDS III debuts next spring. I have it on the best authority (don't ask who) that men have some terrific fantasies. I think you ought to package those otherworldly dreams and imaginings and share them with the rest of us. End of editorial comment.'s people liberation— so where in Hades have all you male-types scurried off to when I'm offering you some paper and space? Men, I'm disappointed in you. This was your second chance at fame, prestige...

Outlands 3 was published in spring 1983 and contains 44 pages. It contains a slash story. 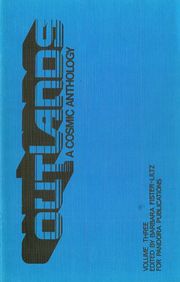 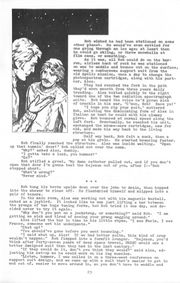 The editor dedicates this issue to Vicki, "For all the right reasons... a lot of silly ones... more than likely some really naughty ones. And because she appreciates good fantasies, beautiful men, and the fine art of lusting... just like me." 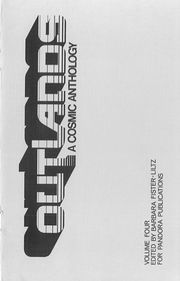 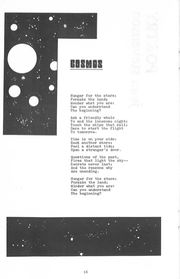 Outlands 4 was published in fall 1983, contains 36 pages, and was edited by Barbara Fister-Liltz.

From the editor's dedication: "For Pat.... because I know you deserve, on a more professional level, everything we've practiced here."

Outlands 5 was published in spring 1984 and contains 48 pages. 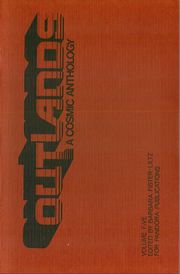 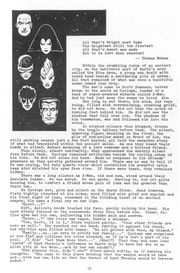 sample page from issue #5, for the X-Men story

Outlands 6 was published in fall 1984 and contains 52 pages. 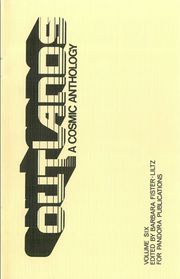 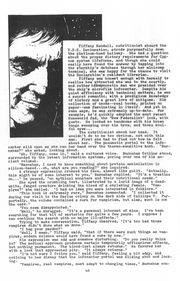 Thank you, one and all, for this third year of Outlands. It hardly seems possible, but here we are again, enjoying some familiar and new names to our writing staff. The quality of material continues to amaze and delight me -- and you too, I'm sure! If there's anything special you think would enhance us, please let us know. We're a project of many talents and many minds and hands, including yours, dear readers. 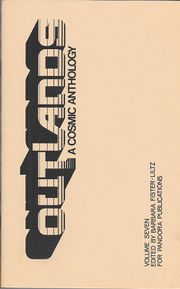 Welcome to the seventh edition of OUTLANDS -- welcome to Springtime and to our new format!

We've been repeatedly asked to include a table of contents in our books and by decision of all of the editors of Pandora Publications, we're going to begin re-designing the format of our continuing anthologies, adding tables of contents, trimming back introductions, add ing additional fiction and poetry, changing the 'looks' of illustrations and, in general, brightening and freshening what we offer you.

For OUTLANDS we're adding the frontispiece listing of contents, making it easy to deter mine the stories and poems and authors, in addition to crediting the media sources of these creations wherever it applies. We're also going to eliminate the lengthy introductions (after all, our contributors say so much more eloquently what your editor fumbles to say!), and we're adding simplified biographies at the conclusion of the volume. We hope these alterations will enhance your pleasure of the wonderful and wondrous bits of prose and poetry sandwiched between our pretty covers. 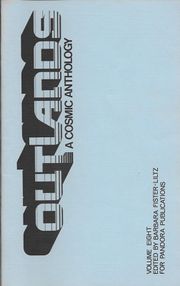 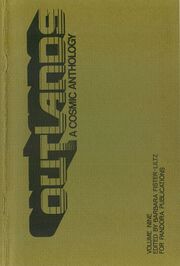 The art is by Allison Williams. 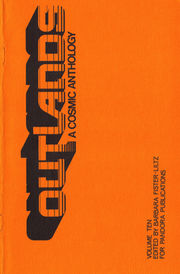 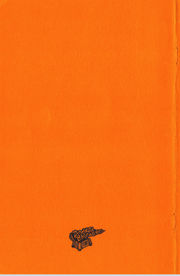