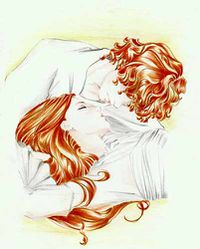 The story was posted to Cassandra Claire's LiveJournal ("epicyclical" at the time) on April 26, 2004.[1]

The story was taken offline with Cassie's other NC-17 work around February 2005, shortly before she announced that she had sold an original fiction series of the same name. In March 2006, in response to a claim that she took down the story to avoid confusion with her profic series, she wrote:

"Well, that's only partly true. After all if I'd wanted the story to stay up, I could have renamed it 'Ron and Ginny's Redheaded Passion' and that would have taken care of that. I took down all of my NC-17 fic about a year and a half ago because there'd been some legal trouble in fandom with people's NC-17 fic being accessed by readers under 17, so I deleted them all. There's still some on the restricted section, which is very careful about age limits and passwords, but you won't find Mortal Instruments there, not because I took it down but because I never posted it there in the first place."[2]

Like Cassandra Claire's other stories, "Mortal Instruments" is frequently uploaded or re-posted online without Cassie's permission, but these copies of the story are usually deleted fairly quickly.[3]

The story was posted to Cassie's LiveJournal in a post titled "sick? wrong? you betcha!" Her introduction read:

Well, a few days ago I posted about the long Weasleycest fic I'd written, and a few people expressed interest in seeing it, so here it is.

I went back and forth on whether or not to post it in my LJ at all, given the NC-17 rating and the unusual subject matter - incest - but finally decided that I would trust that people who don't want to read about incest, will not click the LJ-cut tag, and not read the story.

I've always had a sort of interest in incest as a symbolic fictional theme, and I tried to use it symbolically here. The inspiration for this story (started nine months ago now) came from kitsune13, who said she wanted to read a story in which Harry and Hermione fall in love, thus driving Ron and Ginny into each other's arms, so Catja, this one's for you. :> The secondary inspiration was this picture by Alessandra.

So. Rated NC-17 for taboo sex, dark themes, and Ron's spiral into complete insanity. If you don't like the idea of any of the above, please skip this one. Also the only HP story I have ever written that does not even mention Draco Malfoy. Many thanks to blackholly and tromboneborges for the betas.[4]

The story opens with a quote from Shakespeare's Julius Caesar, the inspiration for the story's title. It is told from Ron's point of view and is set at the Burrow during the summer before his seventh year at Hogwarts.

It begins with Ron, at home for the summer, trying to distract himself from thoughts of Harry and Hermione. A flashback reveals that Ron had walked in on Harry and Hermione kissing while at Hogwarts. Though he told them that he was fine with their relationship, he is jealous and upset because he has feelings for Hermione. When Ron had told Ginny that Harry and Hermione were together, she had been upset and angry, and blamed Ron for not keeping them apart.

At the Burrow, Ron has difficultly sleeping, so Ginny comes into his room and falls asleep with him in his bed. In the middle of the night, Ginny initiates sexual contact. The next morning, Ron tells Ginny that they should stop, but the two end up starting a sexual relationship against his better judgement. The relationship continues when Ron and Ginny's parents leave to help search for a missing Charlie, leaving Ron and Ginny alone in the house, and Ron realizes that he is in love with Ginny.

Because Ron had been ignoring his and Hermione's letters, Harry arrives at the Burrow to tell Ron that he and Hermione had broken up. Ginny asks Ron if this means Ron wants to stop being with her, but he doesn't. Their parents come back with Charlie, and Ron can tell that Charlie is suspicious of him and Ginny. Ginny says that if they don't stop then their parents will find out, and Ron tries to convince her that they can still be together. The conversation makes Ginny cry, but Ron holds out hope.

At King's Cross before the next school year, Ron watches as Ginny approaches Harry and flirts with him with new-found confidence. Charlie stops Ron from intervening, and Ron realizes that Ginny had only been using him for practice.

"Mortal Instruments" was the catalyst for a reoccurring incest wank in the Harry Potter fandom, starting well before the story was even posted. The wank initially started in April 2003, when Cassandra Claire posted twice on her LiveJournal about her plans to write a Ron/Ginny fic for a friend.[5] Cassie's posts themselves received a handful of comments from people responding with distaste or outrage,[6] and some fans posted angry reactions to the posts at their own journals.[7]

Many of the most vocal opponents of the story were members of The Sugar Quill. Charlotte Lennox writes in her exposé on Msscribe:[8]

The SQ crowd tended to be annoyed by Cassandra Claire writing Ron/Ginny anyway, because she made no secret of how much she disliked both characters and it seemed to the SQers that she was writing incest-fic about them as an expression of that dislike. And several SQers thought that it was questionable judgment on Cassandra Claire's part to introduce her thousands of LotR-related visitors, not to mention her hundreds of teenaged Draco Trilogy fangirls, to the pleasures of incest smut.

In May 2003, Angua9 mentioned in her essay A Stubborn Romanticizing and Eroticizing Impulse that "people are disturbed because a very well-known fanfic-writer is publicly burbling about the joys and difficulties of writing Ron/Ginny incest smut," though she did not mention Cassandra Claire by name.[9] In early December 2003, SQ owner Arabella posted (according to Charlotte Lennox) "a rant about the public posting and discussion of happy, fluffy incest fics," which also did not name Cassandra Claire but is thought to have been incited by her planned story and the debate surrounding it.[10] Arabella deleted her LiveJournal in reaction to the ensuing wank.[11]

Evidence suggests that Arabella's post and the surrounding controversy directly led to the creation of the notorious troll account Fandom_Scruples. Msscribe had discovered Arabella's post in January 2004 and created the sockpuppet account "sporkify" to report the post to Fandom Wank.[12] Four days later, Fandom_Scruples was created.

In September 2004, someone posted the entire text of the story on the review page for FernWithy's story "Loosey Lippity Lessons" at The Sugar Quill. Cassandra Claire wrote: "As SugarQuill posts neither NC-17 NOR Ron/Ginny fics (and MI is both), I can only assume said person either hates me or hates Sugar Quill or, possibly, hates us both. I'd be less annoyed if they hadn't posted it under my name!"[13] It is unclear if this too was MsScribe, who continued fishing for wank via Fandom_Scruples through 2005.

The story was well-received when it was finally posted to Cassandra Claire's LiveJournal in April 2004, and generated at least eight pages of comments. One commenter wrote:

"I LOVED this. I love how hidden Ginny is, how you know she's got her own turmoil going on but how it stays murky and unclear until the very end. And Ron broke my heart, as he so often does.

I have my own Issues with happily-ever-after!incest fic, but this works beautifully, I think. It bothers me a bit just on the principle of it that you felt anxious about posting it; I think I can understand why, all things considered, but it's a sad state when you don't even fell fully comfortable using your own journal for your own work. I am sorry it's come to that. Thanks for sharing this."[14]

Another reviewer wrote: "It's simultaneously disturbing and fascinating, because it's so completely plausible. The way you've formed it, I could definitely see it happening."[15]

Works Based on Mortal Instruments