It opened in 2002 after adult-rated material had been removed from FanFiction.Net and contained clear "adult only" notices and other disclaimers. The name of the archive refers to the "restricted section" of the Hogwarts library in the Harry Potter books.

Do you accept fics that aren't rated NC17? (R, PG13, PG, G) Yes. However, for the most part, they are only accepted if they are part of a chaptered fic or an arc. For example, there are a few fics on here that are part of a series that are rated PG13. As it would make no sense to host only the NC17 parts (surely the reader would get confused when there were big gaping holes due to missing chapters or parts!), we will accept all chapters or parts, regardless of rating, as long as part of it is NC17.

We also have accepted a few R-rated one-shots that are "hard R", or very close to being NC17. Mainly this is due to the fact that we felt they were wonderful fics, and also because the line between R and NC17 can be very blurred. What one author finds to be NC17, another could think is only rated R.

Please feel free to submit fics that you think are very close to this line. However, please do consider Fiction Alley if your fic is definitely not NC17. [1]

One of Its First News Posts

26th November 2002: kissaki @ 8:18pm: Well then, since you have all been so patient and generally supportive of our archive, we went out of our way to convince Madame Pince to allow access to our wealth of NC17 fanfiction without you having to hunt down professors for permission slips. Madame Pince has generously agreed to our request - as long as everyone plays nicely and abide to the rules and regulations, therefore we hereby very proudly announce and welcome you all to The Restricted Section, now officially open to the public!

We have been actively seeking out authors to build up an impressive collection of NC17 fanfiction before the launch of the archive and we do hope that you enjoy them. The Restricted Section will be regularly updated with more stories to keep readers sated and we will be holding various fic challenges to allow interaction and participation from authors and readers alike.

Just a couple of weeks ago, we launched a Slashers-Do-Het challenge which was a great success. The deadline for it is on the 21st of December, so if you do wish to participate, it is not too late! The challenge was aimed to get slashers to try their hand at writing het smut and to explore the dynamics in all het pairings. Some authors ended up loving het, while others are scarred for life; either way, the readers would benefit from it, not to mention it is a hilarious idea. Yes, the moderators do have a sense of humour, contrary to popular beliefs.

When the deadline for the Slashers-Do-Het challenge is up, all the submissions will be up on this archive and we will have a page to house all of them for easy access. After which, we will launch the Femslash Challenge as the Harry Potter fandom has a severe lack of female/female fanfiction. So, do stay tuned and check our News page often and we hope you enjoy The Restricted Section just as much as we did bringing the archive to you. :-*

(this post brought to you by Kissaki, but was actually written by Anna. ;D ) [2]

A Cease and Desist Letter

In 2003, it was featured in an article in The Scotsman newspaper, Web of fantasy turns the boy wizard blue, which led to the following cease and desist notice: 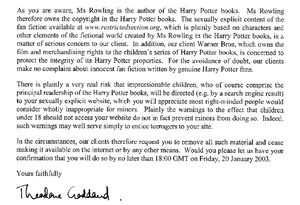 The sexually explicit content of the fan fiction available at www.restrictedsection.org, which is plainly based on characters and other elements of the fictional world created by Ms. Rowling in the Harry Potter books, is a matter of serious concern to our client. In addition, our client Warner Bros, which owns the film and merchandising rights to the children's series of Harry Potter books, is concerned to protect the integrity of its Harry Potter properties. For the avoidance of doubt, our clients make no complaint about innocent fan fiction written by genuine Harry Potter fans. There is plainly a very real risk that impressionable children, who of course comprise the principal readership of the Harry Potter books, will be directed (e.g. by a search engine result) to your sexually explicit web site, which you will appreciate most right-minded people would consider wholly inappropriate for minors. Plainly the warnings to the effect that children under 18 should not access your website do not in fact prevent minors from doing so. Indeed, such warnings may well serve simply to entice teenagers to your site. [3]

In spite of this, the website continued to operate. It currently requires readers to sign up for access by e-mail and to include an age statement.

The founder of FictionAlley commented in 2004 that she considered "Restricted Section" to be a sistersite.

From Heidi8 in the comments to the post 'Elite' archives?:

The original plan had been to have the NC17 stories archived separately from the rest of FA. FA was technically planned in June/early-July 2001, launched in mid-July with Schnoogle, and the rest of the fic houses at the end of July. We had *always* planned to take ArtisticAlley live in the Spring, and also launch an NC17 archive then. And yes, FFN was hosting NC17 fics, so there didn't seem to be a real rush to create the NC17 section.

The reason for keeping them separate was that a number of our mods, including Flourish, Colin, Rex, Starling, Priscilie, Mack, Phil, etc., were under 18, and we thought it would be too difficult to keep them from being exposed to the NC17 stories, and still host them on the site, in part because Flourish and Colin were so active in the (then entirely manual) uploading process that summer and fall. When Stacey (Phatgirlfics, now Phatphatkitty) came on in the early fall, it was with the expectation that she and Gwendolyn Grace would work to create the NC17 version of FA - "Arrowtick Alley" was the original name plan.

But in the Spring, various Veelas talked with Stacey about the archive, and there were some machinations there which I didn't know about until after the fact, and Stacey asked us to bring Kissaki (machiavelian) on to FA so she could learn the ropes, with an expectation of starting an NC17 archive in 2002 that would be a sister site to FA. Stacey had a falling-out with FA in August of 2002 and quit working with FA then, but Kissaki was still part of FA, and that September, when FFN went down in their lie-filled "commemoration of 9/11" gesture, which was really done so they could tuck away the NC17 stories [4], Kissaki, along with a number of FA staffers (including some people who are still on staff for both sites) started work on RS.org.

So basically, RS.org was created as an FA sistersite, and we still do think of it that way. It was founded on similar principles, by many of the same people, and with a similar structure. And given the way domain names and passwords work on the internet, and the way the sites are hosted, it's sort of working well this way. At least, I hope to think so...