Mobile Ghettos is a slash multimedia fanzine and was published in Canada.

It was one of the early multimedia slash zines published. [1]

The title comes from an exchange in The Professionals episode "Killer With A Long Arm":

Doyle: Don't knock it. Ghetto means, um, being able to depend on your own kind.
Bodie: So, you and me are a mobile ghetto, eh?

A Submission Request in Its Infancy

We are thinking of producing an adult media zine with relationship stories from series such as: "The Professionals", "Hooker", "Star Trek", "Man from UNCLE", etc. If anyone is interested in contributing to such a zine, we would like to see your stories, etc. [2] 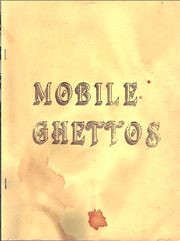 See reactions and reviews of The Christmas Fairy.

[zine]: This zine was a first for me - my first ' slash' fanzine. For those of you unfamiliar with the term, it comes from the fact that these same sex stories are often referred to as Kirk/Spock or simply K/S. The genre has simply become known as 'slash'. As this was a whole new frontier for me, I can't compare it with the numerous other zines available on the subject, but that doesn't matter too much. A well-written zine stands on its own merit, as does MOBILE GHETTOS. E.D. Productions were the first people to actually publish UNCLE 'slash' material. There is quite an underground of N/l, some much better that what was actually published, but this could be due to the fact that E. D. Productions simply didn't know how to get in touch with the proper sources. If there is an MG# 2, I don't think a lack of N/I will be a problem. My favorite from the issue was Emma Lea Marion's "Cultural Exchange Affair", a combination "Starsky and Hutch" and UNCLE. This writer, while merely hinting at the possibility of a relationship between Solo and Illya, deserve credit because she manages to handle each fandom equally, giving neither a vantage point over the other. It is impossible to tell which is her favorite of the two, not an easy task as any cross-universe writer will tell you. This tale is rather tame as far as the sexual content goes but it doesn't hurt the story in the least. The plot consists of Solo and Illya attempting to prevent the assassination of the President of Mozambwee, using a travelling Soviet ballet for cover. Starsky and Hutch are brought in for extra protection, but lef to be naive as to Solo and Kuryakin's real identities. The plot moves well and the characterizations are excellently handled. This is not to say the other UNCLE story (The Turquoise Mine Affair by Eros) is lacking in either plot of characters - in fact, this story has more than its share. It pegs Marion and Indiana Jones as Solo's parents and, while I disagree with the thought, the writer does handle both well enough for me not to have any qualms in that area. Eros also involves the cast from "Hill Street Blues", if only briefly. The whole gist of the story was to form a relationship between Napoleon and Illya, per Mr. Waverly's decision (on the pretense that it would flush out a security leak). I do have the feeling that there is more to the tale just waiting to be told. This is not to say I'm comfortable with the presentation of UNCLE main characters, but they are not 'raped' either to fit into an otherwise impossible situation - a refreshing change. There is also a "TJ Hooker" story (Crime of the Heart by Melanie Athene) that deserves mention. The characters are close to their television portrayal, yet it mentions a part of Hooker's past without having to compromise him, an unfortunately frequent necessity in most 'slash' stories. It talks of caring for people, a lesson we all could learn more about. The rest of the zine is divided between "Starsky and Hutch" (S/H) and "The Professionals" (B?D) stories. These are all very sexual in context and the reader should be forewarned. Most are heart-rendering tales, wrapped around a sexual act... humm, sounds Freudian. However, all are we well-written and no 'character slaughtering for the sake of sex' occurs, making the stories easy to swallow, if you' ll pardon the expression. Hopefully, this will not be the last of "Mobile Ghettos". E.D. Productions has produced a good little zine, which unfortunately is already out of print, and I would like to see more of them. There's a lot of love in this zine and I rate it a #6. [4] 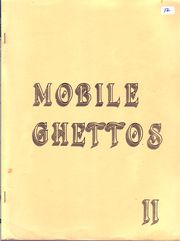 See reactions and reviews for Heat.

[Springtime in Paris]: I note that anyone whose stomach can't process an ordinary dessert, to the point where it incapacitates him for hours, is hardly fit for 24-hour alertness duty in CI5. This destroyed my suspension of belief right at the start of the story, and it never recovered. Healthy eating is one thing; what amounts to a debilitating allergy to a common food substance is another, and is not a useful characteristic. [5]

[zine]: I skimmed a copy of MOBILE GHETTOES II at a friend's, and found the stories uniformly pleasant and enjoyable, except for the last, short piece—"Heat", by Lainie Stone—which is simply the best Pros story I have ever read and the best fan story I have read in years. Incredibly depressing, incredibly touching, incredibly good. Not all that plausible biologically speaking (thank god!) but who cares, all the emotions are right. I heartily urge people to buy this zine. [6]