Lost is a US TV show which began by telling the story of a group of people who survive a plane crash over an island in the South Pacific. Later seasons have added other characters who came to the island in different ways. The show's themes include tensions between faith and reason, life and death, good and evil, free will and destiny. 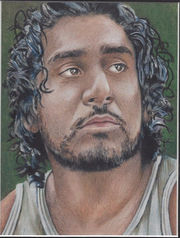 Episodes may involve scenes which take place on the island after the crash, flashbacks (and, in later seasons, flash-forwards) about the earlier (and later) lives of the characters, and -- starting in season six -- scenes from an alternate timeline in which the plane crash never happened, which arguably turns out to be purgatory. The show tends to give small clues as to what's really going on as well as reveals that change the apparent meaning of what has come before.

Because of the show's many puzzles, theorizing about the nature of the island and speculating on future events/reveals has been an important fan activity throughout the show's history. Much discussion took place on the official forum The Fuselage. Many fans have experienced frustration with the creators for stalling so long and then giving answers that change the apparent rules of the universe (a.k.a. hitting the reset button).

One major forum for fan activity is Lostpedia, a fan-created wiki which features everything from episode transcripts and summaries to detailed, and cross-referenced, data on characters and happenings both on and off the island. As of November 18, 2008, the wiki featured 4,401 articles.[1] Lost is far from the only fandom to harness the power of wikis and fandom, but it may be uniquely well-suited to the wiki format because creator Abrams provides so much information to keep track of. (A similar wiki has been created for Abrams' more recent show, Fringe.)

Lost initially attracted some fans from The Lord of the Rings fandom because one of its characters, Charlie, was played by Dominic Monaghan, who played Merry in the LotR movies. (Other fans came from ..., and some have migrated to other shows following Lost actors such as Elizabeth Mitchell (Juliet Burke on Lost) co-starring in the 2009 V remake, Ian Somerhalder (Boone Carlyle on Lost) co-starring as Damon Salvatore in The Vampire Diaries, and Daniel Dae Kim (Jin-Soo Kwon on Lost) co-starring as Chin Ho Kelly in Hawaii-Five-0.)

The show has a large ensemble cast, and depicts characters from different countries including the US, UK, Australia, Korea, and Iraq. Like other fandoms with a large and talented (and attractive!) ensemble cast, Lost fandom features a wide range of gen fanworks, as well as fanworks which focus on a particular pairing or trio. Because the show offers canonical love triangles (notably Jack/Kate/Sawyer and Kate/Jack/Juliet, though one could make the case also for Godwin/Juliet/Ben and, in S5, for Kate/Sawyer/Juliet) there's a fair amount of OT3 or triofic. (Are there statistics available on how the figures here match up with other fandoms?)[citation needed]

Popular slash pairings include Jack/Sayid, Sawyer/Sayid, Jack/Sawyer, and Sayid/Desmond. During season six some fans were writing Ben Linus/Locke ("Bocke")[2], and others have slashed Jacob with the character variously known as Esau and as The Nemesis.

The most popular femslash pairing is Kate/Juliet, though Kate/Claire and Claire/Charlotte are also out there.

Popular het pairings include Sun/Jin, Daniel/Charlotte, Claire/Charlie, Desmond/Penny, Jack/Kate, Sawyer/Kate, Jack/Juliet, and (especially in season five) Sawyer/Juliet.[3] Almost all of these het pairings are canon, though none of the slash pairings are.

Many stories make use of flashbacks, mirroring in text the show's tendency to jump around in its own timeline. Especially during the later seasons, stories tend to explore the interrelationships between characters rather than focusing on the show's labyrinthine plot.

The only know fanzine published to date is The Shepards: Stories of Jack and Claire, an e-zine released in 2010.