Celia Lovsky as T'Pau raises her left hand in the first Vulcan salute ever seen, in "Amok Time", from Star Trek: The Original Series, September 15, 1967.

Live Long and Prosper is a now-famous hand gesture performed when two Vulcan characters either greet one another or take their leave. The phrase "Live long and prosper" is accompanied by this formal hand gesture. The (lesser known) response is "Peace and long life."

The single canon reference to this action being called a "salute" is in the episode "Journey to Babel", where Dr. McCoy asks Spock, "How does that Vulcan salute go?" Leonard Nimoy also calls this "the Vulcan hand salute" when he talks about it in interviews and documentaries. Fans generally refer to it this way as well. One very early example is this December 1967 reference: "Many thanks, and a Vulcan salute ... for suggesting [this] carbonzine become a fanzine." [1]

In January 1968, the zine The Crewman's Log #5 had instructions on how to make "the Vulcan Salute" symbol with one's hands; it involved lots of practice and the application of "Scotch Tape" which one left on one's hand all day to "train your fingers."

There are at least three different versions of the Vulcan pronunciation of this phrase in common use:

The Hand Gesture in Canon

The Vulcan salute was performed in canon for the first time in the Star Trek: The Original Series episode "Amok Time." Celia Lovsky as T'Pau is the first person viewers saw raising her left hand in the now-familiar gesture.

Leonard Nimoy writes in "I Am Not Spock" that he based the hand gesture on the "Priestly Blessing" performed by Jewish Kohanim, the priests of the Hebrew Tribes, with both hands. It represents the Hebrew letter Shin (ש), which has three upward strokes similar to the position of the thumb and fingers in the salute. The letter Shin stands for Shaddai, meaning "Almighty (God)". The words of the blessing are from Numbers 6:24-26: "May the Lord bless you and keep you," and so on. Nimoy says he was also told that the Shin invokes the Shekinah, the female aspect of God, and it is she who enters the temple and blesses the people. 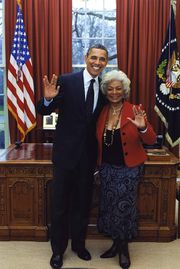 President Barack Obama and Nichelle Nichols give the Vulcan salute from the Oval Office, February 29, 2012.

"Live Long and Prosper" (commonly: "L.L.& P.") is used by some Trek fans as a closing to letters and messages to each other. For example: "See you at the next con! L.L.& P., MPH." Leonard Nimoy signed all of his Twitters with LLAP.

On January 15, 2016, Dr. Philippa Whitford, the Scottish National Party's MP, spoke in the House of Commons supporting the establishment of Britain's first spaceport to be in Scotland. She concluded with the salute and the words "Live long and prosper."

Aboard the International Space Station, astronaut Samantha Cristoforetti wears a modified Starfleet uniform and gives the Vulcan Salute Feb. 28, 2015 in honor of Leonard Nimoy, who died Feb. 6 of that year.

On March 26, 2021, "Leonard Nimoy Day" in Boston, the city's Museum of Science announced plans to enshrine the Vulcan salute as a 20-foot stainless steel sculpture by David Phillips, to stand outside the museum. Nimoy was born in the West End, not far from the museum.[3]

The "live long and prosper' symbol represents a message that my dad believed so strongly in. My dad always loved Boston and he would be honored knowing that the Museum of Science would be the permanent home to this memorial. The sculpture not only depicts one of the world’s most recognized and loved gestures for peace, tolerance, and diversity, but it will also be a beautiful tribute to my dad’s life and legacy. - Julie Nimoy

The Hand Gesture in Fanon

The gesture was named the Ta'al by Margaret Wander Bonanno in Dwellers in the Crucible, and many fans have adopted this name. Diane Duane refers to it as "the parted hand".

Jacqueline Lichtenberg incorporates the gesture in the philosophies expressed in her Kraith series. Here, it is an expression of devotion to Surak's Construct. The thumb held apart from the other fingers represents reverence for privacy: the small finger, IDIC; the third finger, Nome, meaning All; the middle finger, reverence for life; and the index finger, the doctrine of the Domination of Logic. [4]

The Hand Gesture Portrayed in Fanworks