The 2011 convention was held on August 19, 2011 in York, England. People from the UK, the US, Belgium, Germany, and Czech Republic attended.

From the 2011 flyer: "This convention will concentrate and clearly focus on TOS and offers panels as well as quizzes, caption competitions, bring & buy, raffle, episodes, movies, a zine library – and much more! There will be also a Con zine and contests - best K/S drabble * best K/S limerick * best K/S cartoon." [1]

As a small con, the programming was all very informal. We had panel topics, and while some were quite structured...[others drifted on and off topic, but it was all very interesting and it's quite remarkable to be able to go for a whole weekend on one pairing without running out of things to talk about. Even the mpreg panel held my interest, and that's saying a lot!...Other than the panels, we had a quiz, in which my team only managed third (albeit with a person missing), but as a splendid commiseration prize I got a lovely K/S pen and post-its in the lucky dip...And of course I spent far too much money on old zines. There was also a really cool competition involving pictures on the walls illustrating a scene from a fic, with one accompanying paragraph, from which you had to guess the fic title. I was utterly hopeless at this. There was a lot of "oh, that's that fic where...y'know...", but titles? Titles are hard. tracionn ended up winning with a grand total of 5/15 (I think?), whereas I managed a paltry 3. There was also the con zine, featuring haikus, limericks, drabbles and fics on which we had to vote.... [2] 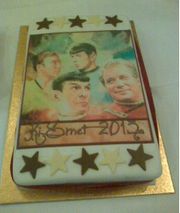 This Kismet Con was the third that Anne and Kate had run, and this time it was held at the Lane End Conference Centre, an almost ideal Con venue, set in lovely grounds: I even meant to explore these more, but it was such an engrossing Con, I never really did! Many of us had been here last year, for KisCon 2012, and it was great to be back. The facilities were of a high standard, and the food was lovely, with plenty of fresh fruit and tempting choices. Sharing meals and chatting is always a wonderful part of a Con, isn't it?

But on to the Programme: our Organisers had devised a fascinating, to borrow a term, schedule of activities and panels, some intriguing, some just fun! We had an effective ice breaker game involving guessing which Trek character name we'd each had pinned to our backs, and when I was Sarek, my good friend Joan was Amanda, which was fun!

At the opening ceremony on Friday evening, Anne introduced our guest of honour, drum roll..., Elise Madrid! Elise was a great guest, running several panels and I hope she enjoyed herself. I think she did. I'm pretty sure we all did. Meeting old and new friends in K/S is a lovely aspect of Cons and Anne and Kate had thoughtfully arranged us into teams for activities on both evenings: we played a game called K/S Connections and took part in The Big Quiz! Fiendishly difficult, I might add, but great fun. I think my teams came a respectable second or third and we were well pleased and relieved with this! Some of the so-called connections were obscure in the extreme. An amazing feeling when we got some correct, though!

As for the panel topics, we talked about humour in K/S, diverse sexualities (during which I learned new things!), compared classic with reboot Kirk and Spock and looked at the concept of a non This was a most satisfying Con indeed. It ran smoothly and it was evident that the Organisers had worked hard to achieve this. I appreciated how Reboot Trek was an integral aspect of the K/S we all talked about if we chose to include it A true example of IDIC indeed! The Con charity, about educating young women in the Third World, was well chosen. The Con packs, in useful tote bags, were a delight and I loved the way that T'Rracionn's beautiful Con artwork, featuring Kirk and Spock at different times in their lives, was reproduced in many forms. A shame I couldn't do the anagrams or the picture quizzes, but I guess I was too busy pestering everyone to buy yet more tickets!

Well done to all my fellow attendees, who made the Con such fun and a huge thank you to Anne n Kate, our Con OrganisersExtraordinaire for the most wonderful Con Experience! ! YAY! [3]

Kismet 2016 was held in High Wycombe, 2-4 Sept 2016. Attending members came from the U.K., Germany, Sweden, the Netherlands, the U.S.A., Belgium, and Austria. Highlights of the convention were a Trek-themed concert on Friday night, the great Kismet quiz and the vidshow on Saturday night, an art show and auction, a large raffle (the proceeds of which were going to The British Lung Foundation in memory of Leonard Nimoy who died of COPD), and several competitions. A zine library and a book browsing box were available throughout the weekend.

"It’s fate, it’s destiny, it’s KISMET! And IT IS HAPPENNING!

From the organisers Anne & Chrissy:

Kismet - The K/S Convention in the UK will welcome fans again in 2016, this time to celebrate 50 years of Star Trek!

Where? At Lane End Conference Centre, High Wycombe, Buckinghamshire, UK
When? 2nd - 4th September 2016
How Much? £235, all inclusive. This includes a single room with ensuite bathroom, all meals, refreshments, games, quizzes, fun and joy, of course!
We are open for registrations from September 2015.

I’ve been to and with this con twice and can assure you it’s gonna be SO MUCH FUN. Also, the location is wonderful, lovely and perfect for a nerdy slashy con weekend."[4]

Jess Brown & Fiona Graves: Friend in Me (not online)

Killa & T. Jonesy: Knights of the Round Table (not online)

Bluefairy1113: All I Need (vid on YT is unfortunately muted)

Indrikhole: Brothers Under the Sun

Chris Soto: Wind Beneath My Wings (not part of the competition) (VCR-era vid; not online)

EimeoMoon: Save the Last Dance

MissSheenie: Spock’s Down on his Knees (not part of the competition)

Severny Sneg: Home is Where the Heart is

Melodysheep: The Good of the One (Nimoy tribute)

Severny Sneg: The Road is My Home

Qingniao: My Body is a Cage

Xkelociraptor: Time Will Tell (not online)

KISMET VID COMPETITION: The Search for the Best Songvid

All songvids that were shown during the con weekend were eligible (unless otherwise noted) for the songvid competition and were voted on by the attendees at the end of the con.

There were two categories. The overall tone of the vid determined its category.

▪ “Drama”: vids with a more serious tone, character studies, including all kinds of angst

This year the con zine was published in digital form only. The authors were only disclosed after the convention to keep the voting anonymous.

Rhaegal won Best Costume for her Kara, the Eymorg from "Spock's Brain".

KiSmet 2018 was supposed to have a vid competition with the theme humour. Unfortunately there were not enough entries to actually go through with the competition, so the vidshow curator decided to feature these premieres in the vidshow and in the closing ceremony instead. Humour is, as Saavik put it, a difficult concept...

Nevertheless, the VJ curated the vidshow with this theme in mind; the playlist was therefore a mix of humorous vids, upbeat party songvids, and a dose of silly WhatTheFuckery thrown in for good measure.

T'Lanza: I Got It from Agnes (premiere) (not online)

Killa & T. Jonesy: Knights of the Round Table (not online)

EimeoMoon: Save the Last Dance

EvilPiranha11: For Your Entertainment (not online anymore)

ImaginarySanity: Do a Barrel Roll, Kirk!

Mortmere: The Prize (or: The Whipped Cream Maneuver)

MissSheenie: Captain Kirk Jizzed in his Pants (not online anymore)

Paul Heriot: Lucy in the Sky

MissSheenie: Spock's Down on his Knees

Fall On Your Sword: Shatner of the Mount

During the Closing Ceremony on Sunday (2 Sept 2018) the three premieres were shown one more time.

The concom decided against a con DVD (so many people don't even own a DVD drive anymore) and went with USB flash drives in its place; instead of a shorter selection, attending and supporting members received the full playlist.

The Art Auction, organised by T’racionn with Trekker and Angel Grace ...the auction raised an incredible £265 for the charity. Many donated works, especially Shelley Butler's which raised over £200 alone

Supporters : £10 (1 from each supporting registration went to charity)

Other generous donations: £118 (percentage of Art & other sales and other donations)