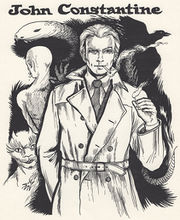 fanart by pyracantha: "John Constantine is an occult detective in the DC comics universe. Constantine, also known as "Hellblazer," has had a long career since his first appearance in 1985. He was originally designed to look like the British rock performer "Sting." He has never been absent from DC comics since then, going through a dizzying pandemonium of demonic onslaughts, devils' games, multiple murders, magical operations, and any other number of crazy plotlines. Following the "film noir" detective archetype, he usually appears in a trenchcoat with a suit and a tie (often loose like a noose) and constantly smoking cigarettes. There are so many horrific creatures and characters in the Constantine storyline that it would be impossible to depict even the most important of them so I just alluded to them in this fan portrait, which was published in 1987 in a private fan magazine. Black ink on illustration board, 8 1/2" x 11", May 1987. Dark fantasy for the darkest night of the year, Winter Solstice." -- pyracanthasketch

John first appeared in The Saga of the Swamp Thing (vol. 2) #37 (June 1985), then started headlining his own comic in Hellblazer in 1988. He frequently appears in other magic-based comics published by DC Comics, most notably in The Sandman, The Books of Magic, and Justice League Dark.

He was confirmed bisexual in 1992.

The Constantine (TV Series) was confirmed to exist within the Arrowverse, with Matt Ryan's version of the character appearing in an episode of Arrow's fourth season. He helped to restore Sara Lance's soul to her body, following her resurrection in the Lazarus pit. Constantine also made a guest appearance in two episodes of season 3 of Legends of Tomorrow. An animated Constantine series on CW Seed will continue this character's story, with Matt Ryan voicing Constantine.

John Constantine/Chas Chandler is fairly popular within the fandom. John Constantine/Mary "Zed" Martin is a rare pairing. Crossovers with Supernatural also happen, in which he is often shipped with Dean Winchester or, less often, with Castiel. There are also crossovers with the Lucifer (TV series), where John is paired with Lucifer Morningstar. This pairing also appears in the movie fandom but is rarer.

John Constantine is often a side character when he appears in Arrowverse fan fiction, similar to his role in the canon of the shows. A rare pairing within the fandom is John Constantine/Laurel Lance .

Fans were excited to learn that Constantine would return as a bisexual character when he appeared on Legends of Tomorrow for two episodes. [1] Many fans were initially disappointed when the Constantine (TV Series) introduced him as a straight man, when the character had been canonically bisexual in the comics.

Following his appearance on Legends of Tomorrow season 3, works pairing Constantine with Gary Green began to appear. Despite the two only sharing a small number of scenes this is the most popular pairing for John in the fandom. Constantine's promotion to series regular in season 4 was greeted positively by fans. [2]