Han Solo: A Ladies' Man for All Seasons

Han Solo: A Ladies' Man for All Seasons is an essay by Sherry Magee about the appeal of Han Solo and his portrayal in fiction that has a romantic focus. In it, the author discusses a number of current stories.

Han and Leia in Fanfiction is a similar essay by this author, written a year later. Another similar essay, one by Chris Callahan is called The Many Faces of Captain Solo, written in 1981. 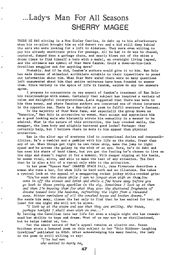 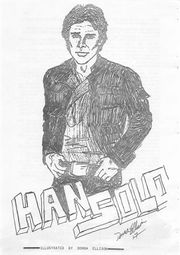 from essay, art by Donna Ellison, from Empire Star

Han Solo has made dozens of whimsical scribblers scrabble to their typewriters to pound out information about him. When Star Wars ended there were so many questions left unanswered about him that entire universes have been founded to answer them. Since variety is the spice of life in fandom, seldom do any two answers agree.

I propose to concentrate on one aspect of fandom's treatment of Han Solo - his relationships with women. Certainly that subject has inspired a variety of tales and delightful interpretations. Leia suggested that there was more to him than money, and where fanzine authors are concerned one of those interests is the opposite sex. There is a Han-tale or poem to fulfil everyone's fantasy. To the majority of Star Wars fans, and especially... the group known as "Hanatics," Han Solo is attractive to women. Most accept and appreciate him as a good looking male who blatantly struts his sexuality in a manner to be admired. What is the nature of this attraction, the lazy crooked smile, the swagger, the lean body and slightly battered good looks? Perhaps: they certainly help, but I believe there is more to his appear than physical attraction.

Han is the alter ego of everyone tied to conventional duties and responsibilities. He's a rambler and a gambler with his life as the stake, freer than any of us. When things get tight he can raise ship, make the jump to light speed and be across the galaxy in the wink of an eye. Sure, he's in debt and has seen his share of hard times, but you get the feeling he's chosen to live on the edge and doesn't regret it for a moment. With danger nipping at his heels, he seems vital, alive, and able to make the best of any situation. The fact that he is also a bit of a rascal only adds to the attraction.

So there you have it, an overview of the Corellian and his ladies. And what ladies they are: generals, pirates, smugglers, warriors, princesses - all strong willed and independent. It seems that the definition of Han in fan fiction is governed largely by the growing consciousness of women today. Seeing themselves as stronger, more independent, they are willing to appreciate and love, but not be dominated by the Corellian. He becomes the composite of what many would like to see in a partner - big brother, friend, lover. Han Solo in skin-tight jeans, blaster on his hip strolled out of that Mos Eisley cantina and into the hearts and imaginations of fandom. With THE EMPIRE STRIKES BACK looming on the summer horizon, he will soon return for more adventures on the big screen. All this Hanatic can say is, may his swash never buckle!

The Stories and Poems Discussed

From letters of comment printed in the fifth issue of Facets:

Sherry's article is thoughtful and we11-organized; I'd like to see a follow-up to it sometime, concentrating on the ladies with whom Han has been involved since it was written. [1]

Sherry Magee's article I found superficial and very disappointing, pretty much a waste of five single space zine pages. I may be asking too much, or misunderstanding her intent, but there is no real analysis of character or plot and precious little of even the synopses she provides, assuming, I guess that her readership has seen every story she mentions. I for one haven't and was confused by her many passing references to this story or that poem. There has been little or no real criticism of fanfic print ed (outside of LoCs) and a applaud her attempt at it, but that's about all I can say for it, she tried. As an author not claiming any special expertise other than that, I was disappointed in that the first attempt at examining SW lit seems to have been so carelessly thrown together, with a brief catalogue of story excerpts and the author's astonishment at being just barely able to discern the common thread of Han's multivarious ladies just as independent and free living as he is! That's not exactly a surprise in a universe that's been at war one way or another for forty years! I have few if any arguments with her choice of story examples, except that she seems to assume that they are all well known and some were in zines that are not that widely distributed (such as J.J. Adamson's SOLO). I just wish she had put more thought and a bit more work into her apparent effort to compare and contrast the stories she mentions, and more discussion into the article of the motivations and manipulations of the ladies and the Corellian in those stories. They are human characters (I found no mention of the Cat Lady) and could have been discussed in depth. I applaud the editors for printing this sort of article, though. It's an area of fanwriting that is sadly lacking and (I think) very interesting.

The only thing in the 'zine I really didn't like (prose-wise) was the 'Ladies' Man' eulogy. I didn't really see any point in it at all. It seemed like four pages of concentrated ego-boo for those people whose writing was mentioned in it, and by contrast, slighted those of us who weren't. I don't mind my stuff not getting in — after all. It's hardly seen circulation yet — but to slight Jane's stuff (besides SPACER) and yours, and twenty other people's (there are only seven authors mentioned) and then to dwell lovingly on tripe like Nowakowska's Han -- who is totally unrecognizable to me — and obscure stories like J.J.'s, which only have a circulation of fifty in the states, seems unreasonable.

I enjoyed Sherry's article immensely (I got a sneak preview) and — in light of the fact that she treats of some stories close to my heart — I'm hoping she'll get good reactions in your LoCs.

Sherry's article is thoughtful and we11-organized; I'd like to see a follow-up to it sometime, concentrating on the ladies with whom Han has been involved since it was written.

... my other favorite piece in #4, Sherry Magee'a analysis of Han Solo's way with the opposite sex. Sherry shows a lot of insight into the character of how his appeal transcends the raffish good looks. It's amazing to consider how Sherry and all the fan writers she deals with concocted essentially the same sort of romantic profile of the Corellian all based on Ford's characterization of Han in SW, so one must assume that all the slightest nuances Harrison put in that part really came across well, had now that TESB is out we can see that Sherry and the others were right on the mark.

I was not familiar with JJ Adamson's stories discussed in the article but I knew all the rest, and I found Sherry's comments on them perceptive. That calculating Han of Paulie's is a real charmer! Talk about a come-hither look!

I also enjoyed Sherry Magee's article on Han and his women. SW articles are so rare, and well-researched ones rarer still.