You may be looking for the fan Espresso Addict.

Espresso (each issue is called "Espresso for...[number]") is a gen, het and slash zine series.

The editor/publisher describes it as a "multi-media multi-relationship anthology zine."

The series was published in Australia by Julien, but it also has an American agent, Kathy Resch. The zine was also available through the Knightwriter.org zine agenting site.

According to the expanded ad for this zine on the Knightwriter.org website: "This zine features stories about relationships with oomph - the sort that gives the readers a caffeine jolt - double espresso style - whether they are sexual (straight, slash or less-well-defined), or explore characters who are 'just' friends or bitter enemies. Includes slash in the following fandoms: Highlander, Eroica, Batman Returns, ST:TNG, Tombstone, Pros, Wiseguy, Good Omens, Garfield, Due South and more. 115,400 words."

There are three issues. 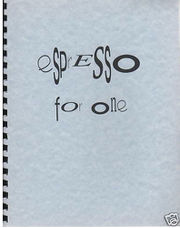 Espresso for One was published in January 1996 and contains 146 pages. It contains one full-page illo by Shayne McCormack.

Welcome to the first issue of ESPRESSO. I hope there will be more issues (though I'm not as involved in fandom as I used to was) - however, this zine is a bit of an experiment, so we'll see what happens next, shall we? Stay tuned!

The theme of this zine is relationships with oomph... The sort of stories about relationships that give the reader a real caffeine jolt ~ double espresso style. Many of the relationships are (of course, knowing the sort of zines I like) sexual - but they include the straight and the queer and the less-well-defined. Many of the stories feature characters who are 'just' friends, and others who are bitter enemies. What's important is the impact of the characters and of their effect on each other. In seeking contributions, I was after dynamic diversity and polymorphous perversity!

This idea originated when I really wanted to publish Annie's story BY WISDOM, PEACE ~ but it wasn't slash, and at the time I was only producing slash zines. But I found I welcomed the freedom that the idea brought with it. When you're writing for a slash zine, naturally you tend to make the slash relationship the main focus, and maybe include sex scenes just for the sake of it, etc ~ but sometimes there are other things worthy of focus that get left behind. When I became obsessed with the movie TOMBSTONE, for instance, I really enjoyed being able to explore more than just the slash relationships (although, hell, they were plenty good for me).

I guess it's inevitable that, in one issue, we couldn't cover as much diverse ground as I'd hoped. However, stick with us (and contribute your perverse thoughts!) and we'l see how far we can push this envelope..

As you'll see when you browse though the zine, I've broken copyright laws in all kinds of places this time round. I've quoted liberaly from a STARBUCKS COFFEE brochure called (appropriately enough) ESPRESSO: WHAT YOU NEED TO KNOW. Other quotes are generally credited, except for those from THE AUSTRALIAN CONCISE OXFORD

DICTIONARY and the ENCYCLOPEDIA BRITANNICA.

Recommended if you like the other shows in this zine [besides due South]. Probably $9 plus postage, no fuss zines with good value for money. [1] 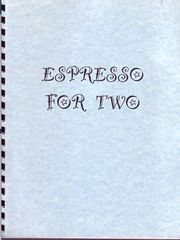 Espresso for Two was published in October 1997 and is 158 pages and features 1 illustration by Anja Gruber and 1 by Anna Vie. 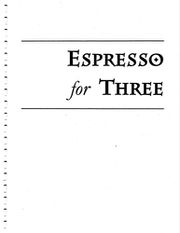 The zine has three illos by Shayne McCormack and Anja Gruber.

Welcome to the third issue of Espresso! Once again, I'm particularly proud of this zine. For whatever reason, it seems to attract (or maybe even inspire?) a high quality of contributions. I want to thank all the authors tor making this zine possible.

Unfortunately my idea for an X-Files zine (Xistential Tales) was not to be, or at least not at this stage. I wasn't receiving enough contributions to make it work, perhaps because The X-Files is more of a net-based fandom. So, with the permission of the authors, I've included some of the contributions in this zine instead. I would still love to publish an X-Files zine, though, so please send me something if you'd like that, too.

My Real Life has radically changed over the past few years. It's been gradual, though, so I only realised that recently, looking back on what's happened. I used to be a full-time career public servant, with a hobby in writing and in publishing zines. Now I'm more of a freelance writer and editor, and I have started up my own small business in publishing books. Like, I'm doing it all for real! This has been the best move I ever made, but of course there have been stresses and a whole lot of draining of time and energy. My fellow fans are very understanding about delays in publishing zines — I guess we all realise that fandom must often be fitted in around the edges of Real Life, and much as we'd like to make fandom our priority we can't. I am asking for further patience from you all. The sort of work I'm doing now — writing, editing, etc — is similar to publishing zines, so I can no longer consider that aspect of fandom as a break or a change from what I do day-to-day. I'll continue pottering along with my zines, but your continuing patience with me will be appreciated.

If there isn't something in this zine that features your particular kink, then please write me something that does! I'm happy to take contributions from any universe, including media, literature, real life (as long as it's non-defamatory!) and original — and in any style, including fiction, poetry, illustrations or anything else you desire.