From Fanlore
(Redirected from Agent Molo)
Jump to: navigation, search

Morgan Logan discovered fandom pathetically late in life, and as such can be deemed somewhat developmentally challenged. However, she attacked Starsky & Hutch fandom in June of 2004 with an unprecedented vigor and by September of that year had published her first slash story, Blue. Unwary fans were thoughtless enough to encourage her in her porny endeavors, and soon she engaged the two policemen in other unseemly adventures, followed quickly by her first zine publication, Torn.

Agent Molo has since written over 70 slash and gen stories and novellas in Starsky and Hutch and created 15 vids and various artworks, most of which are available on her website. She is also the President, Vice President, Director of Finance, Secretary, Minister of Propaganda, and provider of canapés for the Starsky & Hutch Appreciation Society, a shady organization which meets irregularly at an undisclosed location. 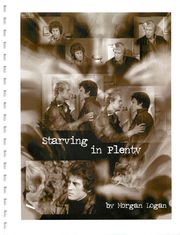 interior art she designed for one of her stories in Dangerous Lives, Dangerous Visions #4

Note: Agent Molo has been recently been working undercover on authoring Homoerotic Documentary Materials under the top sekrit pseudonyms Arrow and Esteefee. 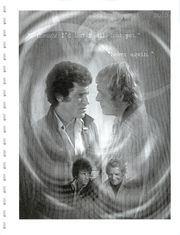 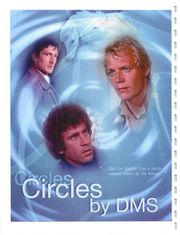 But by far, her proudest accomplishment she traces back to her Spartan ancestry which enables her to emit a fierce battle cry as she chases speeding truckers on her bicycle. While to date she has yet to catch one, the resulting battle will certainly be epic and involve large blades.