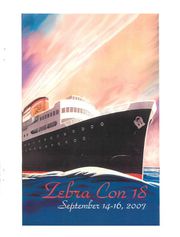 Playlists and vid show reviews from the 1990s and 2000s are being collected at ZebraCon/Vid Show.

"The last ZebraCon was held in Chicago on September 14–16, 2007. I had only attended one ZCon before and didn't want to miss this farewell to a favorite fan-con institution.

On Friday, while I was looking for the con suite, I accidentally bumbled into the Supernatural party. Since I have a few friends that have been sucked into this fandom I stayed and got them party favors, and ended up winning a couple of prizes myself. The first vid they showed at the party was J.M. Griffin's "My Son John", which was created at my house on my computer, so I feel kind of attached to it.

I was a moderator on a couple of Sentinel panels with Kat W. that were well attended and the discussion was fun and rousing. Kat is pimping Revelcon every chance she gets. We need to appoint her "Special Friend of

Revelcon" status. She really loves the barbecue restaurant behind the hotel. Their vid show was on Friday night and my songvids went over really well. Mysti Frank sold 4 out of 10 DVDs of my TS vids and 9 out of 10 of our Revelcon songvid contest DVDs at her table for me.

Saturday night was the dessert party. Everyone dresses up and I have to say I looked damn fine in my fancy togs. I got drafted into performing in the Saturday evening play, "Baaad ZebraCon Theatre" modeled after Masterpiece theatre, which was hilariously funny and got lots of laughs. Nobody had to memorize any lines. We just acted out what the narrator described. I played Ray V. of Due South and had a running dispute with the other Ray over just who the Mountie belonged with.

Sunday I just hung around and made friends with lots of new people and ate way too much, which was basically

what I did the whole weekend. The con was a lot of fun and it will be missed."[6]