To Slay or Not to Slay: Why We Write 'Get-em' Stories -- & Love 'em! is an article by Becca Oroukin and Connie Faddis in Interphase #3. It was jokingly dedicated to the memory of Joyce Yasner (who was still alive).

The authors discuss the genres of Hurt/Comfort and Get'ems and use a variety of Trek stories along with excerpts from each fanwork, as well as some academic articles. The authors included many quotes from well-known fanwriters. 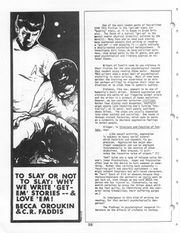 One of the most common genre of fan-written STAR TREK fiction is the "get-em" story (or "bonking" story, as it is known in Great Britain). The focus of a typical "get-em" is the mental and/or physical ordeal(s) suffered by the hero(s). Many fans who've read such stories have expressed concern that writing or reading a "get-em" -- and enjoying it -- could indicate a deeply-rooted psychological maladjustment. To investigate this issue, we have solicited opinions, read noted works in the ST genre, and per used psychological and literary sources on related themes. Writers of Treklit seem to use violence in their fiction for the same psychological reasons that readers enjoy reading those works. Amateur TREK writers show a great deal of psychological visibility in their writing. Most of them have neither the training nor experience to be able (or perhaps willing) to disguise their inner motivations or to cloak them in symbolic sublety.

"Get" tales are a type of release valve for inner frustrations. Anger and frustration lead to the desire to hurt someone or something. Rather than striking back outwardly — incurring guilt and possibly punishment — one might torment imaginary but well-loved characters. We "hurt" Spock or Kirk or whoever, because they replace/represent the person(s) we really want to get back at, even though we may care about the person who has injured us. (Conversely, we may punish ourselves by proxy for things about which we may feel guilty, by identifying with the character being traumatized; their suffering purges us.)

Creators of "get-em" tales sometimes equate them selves subconsciously with God. The STAR TREK characters are ours to mold or mangle. We direct their fates. We exercise control over the lives of our fictional heroes as an expression of our wish to exert greater control over our own lives and the lives of those we love.

On first reading, several well-known, fan-written ST stories appear to be abnormally morbid or sadistic. In Paula Smith's novel, The Logical Conclusion, Spock is mind-raped by a misguided Vulcan cult-figure, Sidil, who convinces Spock that Spock's death is desirable and necessary. He gener ously shows the Science Officer several efficient ways of doing away with himself... The first part of Paula's novel originally intended to parody the "get-em" genre by simple excess. The rest of the novel deals with the consequences of the mind-rape and Spock's eventual reintegration of his personality, and justifies the excesses, for they are no longer gore for gore's sake. The changes within the main character leave no one untouched.

Diane Steiner's Spock Enslaved is one of the most popular examples of a get-em". Spock, accused traitor, is punished accordingly by Cardson, errant Enterprise crewman... Spock Enslaved seems to be on the borderline between serious drama and gratuitous violence. The violence was justified because it convinced the reader of the severity of Spock*s injuries and his subsequent vulnerability to Deeja, the girl who nurses him and becomes his mistress; it also reveals the true character of Cardson, who later betrays plans made by Spock and Kirk. The violence, at the same time, could be considered gratuitous because the descriptions of it exceed the requirements of the plot.

Jennifer Guttridge's Tower of Terror graphically describes tortures inflicted on Spock by an alien in order to find "the measure of a man"... This type of story sets up an artificial situation in which the protagonist is forced to explore his or he inner self. Tower of Terror dwells at great length and in exhaustive detail on the physical traumas, yet in the end it fails to "find the man", for it is obsessed with the suffering and neglects to examine the inner Spock or to allow him to question his own motivations. In fact, the only motivation we are given for Spock's enduring this abuse is his need to "rescue" Kirk, who may not even be in danger. The reader is left with gratuitous violence, but a lack of insight into either Spock o the being "testing" him, who appears to be a flagrant sadist. Ms. Guttridge writes a powerful superficial scene, but as psychological drama, Tower of Terror is a failure. A pity.

Ultimately, good tragedy and drama are not usually concerned with the suffering itself, but with the dignity with which it is endured, or the strength with which it is conquered. Through suffering, one can reach reflective self-consciousness and an awareness of human limitations. This article has tried to examine the Whats and Whys of" get-em" stories. Perhaps we can now examine and reaffirm our inner compulsions to create such tales. . . and accept these motivations for what they are.

If you're looking for a psychological discussion of "get-em" stories (this included hurt-comfort stories, since a character may "suffer a mental and/or physical ordeal," the focus of a get-em story), Interphase #3 (1976 fanzine edited by Connie Faddis) has an analytical article by Becca Oroukin and C.R. Faddis titled, "To Slay or Not to Slay: Why We Write 'Get-Em' Stories—And Love 'Em!" I don't care for stories where my favorite character dies, but this article also makes astute comments that can be related to hurt-comfort stories, which I do like. Maybe I'm still a "kid"— I like happy endings, including Spock realistically saving Kirk through physical or mental actions. [1]