Snape and Quirrell are both Hogwarts teachers in Harry Potter and the Philosopher's Stone and are shown to be at odds with each other. It first appears that Snape is bullying Quirrell—who appears to be stuttering, timid man—into helping him steal the Philosopher's Stone. At the end of the book, it is revealed that it is actually Quirrell who has been attempting to steal the Stone and that Quirrell is in league with—and in fact sharing his body with—Voldemort, while Snape has been trying to stop him.

How much Snape knew or suspected about Quirrell working for Voldemort was deliberately unclear, in order of obfuscate Snape's true allegiance. Snape's explanation to the Death Eaters was that he knew nothing of Voldemort's involvement, but "saw only greedy and unworthy Quirrell attempting to steal the stone."[1] It was confirmed in Deathly Hallows that Snape had been "keeping an eye" on Quirrell on Dumbledore's orders.[2]

Snape and Quirrell taught together at Hogwarts at least one additional year prior to Philosopher's Stone, although Quirrell's employment history at Hogwarts is murky. Quirrell is described as a "young man"[3] but his precise age is unknown, while Snape is canonically 31 at the beginning of the first book.[4] Some writers place them as students at Hogwarts together, but they are commonly written with an age difference of up to a decade. Snape started teaching at age 21, so if Quirrell is four or more years younger than Snape, then Snape would have been his teacher. 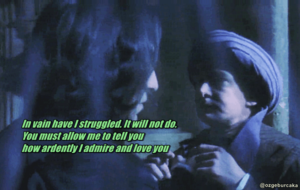 Image from Özge's Harry Potter And The Philosopher’s Stone Photo Recap: A still from the film (Snape pressing Quirrell against the wall of a darkened corridor) captioned with a quote from Pride and Prejudice.

The first Snape/Quirrell stories may have been written in November 2001, possibly inspired by the Philosopher's Stone film, which came out that same month and includes a scene where Snape threateningly pushes Quirrell up against a wall. By early 2002, Snape/Quirrell stories were posted at Slug & Jiggers Apothecary, the Snape rarepair archive of the Snape Slash Fleet.

Three Snape/Quirrell stories were written for the first wave of the Severus Snape Fuh-Q-Fest, which ran from March to May 2002. Participants were randomly assigned pairings to write, and Snape/Quirrell was one of the potential "easy pairings" as chosen by the fest mods.

Although there have been self-proclaimed Snape/Quirrell shippers from the early 2000s to today, there is no Snape/Quirrell community to speak of. The pairing continues to be very rare, with possibly only a few dozen fanworks in existence.

Common tropes in Snape/Quirrell fanfiction include power imbalance,[5] dubcon and coercion, and missing moments from the first book. There is also commonly implicit or explicit Snape/Quirrell/Voldemort, as Voldemort would have been present with Quirrell for any events set during the Philospher's Stone school year.