From Fanlore
(Redirected from Slaysu (So Like You And Yet So Unlike))
Jump to: navigation, search

SLAYSU stands for "So Like and Yet So Unalike."

A continuation of this zine is Conflicting Impulses.

The editors have an addition to their ad for "Slaysu" in Universal Translator #17, one that offers information about their slash stories. Fans were invited to send them a SASE for more information:

"We have some stories available only on a request basis and only to legal adults. This is because many people have strange views on homosexual (or any type of sexual) relationships. If you are offended by such relationships or by stories about such relationships, these stories are not for you. These stories are short, graphic and all in fun. They are not meant to answer serious questions. The whole purpose is to offer an alternative to the ordinary."

Some of those stories: 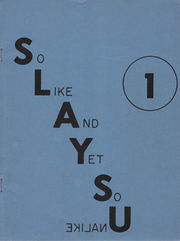 SLAYSU 1 was published in November 1980 and contains 70 pages. It has two Star Trek: TOS pieces (one story focusing on Uhura, and the other an ST biography), two Galactica 1980 pieces (one a love story, the other an article on the reality of Space Gods), five Star Wars stories (three on Han Solo after the carbonite, a story highlighting Chewie, and one about a Luke and Vader encounter story). 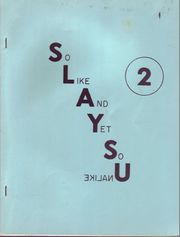 SLAYSU 2 was published in February 1981. It contains 94 pages of fan fiction stories from Star Wars, Star Trek, and Battlestar Galactica. It contains a different Luke and Vader encounter story, a story about the wackiest ship in Starfleet and a vignette on a very yound Yoda. 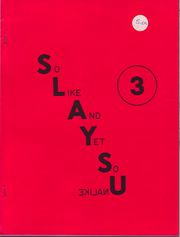 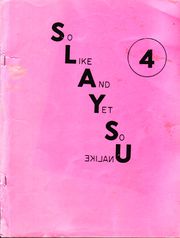 SLAYSU 4 was published in March 1982. It contains 90 pages of fan fiction, poems, cartoons and art. All stories are rated, most are G or PG, one X and 2 R rated. 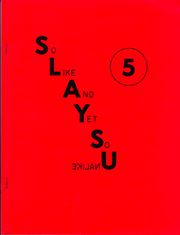