The #podfictits meme is a hashtag on twitter that involves podficcers and podfic listeners posting pictures of their breasts, often with a microphone or earphones in the shot, most likely nestled in their cleavage. The pictures generally centre on the person's breasts, cutting off the face and lower body. Most of the people featured are wearing only a bra, though some have completely naked breasts or are wearing clothes that show off cleavage.

It was during a podcast recording on November 10, 2012, by bessyboo, hananobira, heard_the_owl, jenepod, and paraka, that the term podfictits was first used. The podcast was being recorded for pod_aware[1] and while the original conversation was cut, the outtake where the term was coined was released later as a blooper on twitter.[2] In the blooper, heard_the_owl was attempting to say podfic_tips, the name of a resource comm for podficcers on Livejournal, but kept flubbing the line and sounding as though she said podfic tits. Paraka jokingly said "although I think podfic tits would be a fun comm too" and bessyboo announced that she would "be the first to post." It was heard_the_owl that suggested putting your mic in your cleavage for the picture.

In the blooper recording, the group joked about starting a tumblr with this name, but due to the ease of posting, bessyboo simply posted a picture of her breasts and microphone to her personal twitter account.[3]

Despite enthusiasm for the idea, only one picture was posted in 2012. 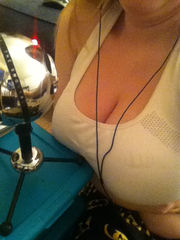 It wasn't until January 2013 that the #podfictits meme reached a higher level of distribution and participation.

On January 2, 2013 thriceandonce tweeted "Mostly what I want is a pack. Cuz if werewolf fics have taught me anything, it's that pack means family, an alpha, & half-naked puppy piles."[4] This lead to a twitter discussion, originally primarily between thriceandonce, hananobira, and paraka about podfic fandom being a pack.[5] Hananobira asked who the alpha of the podfic pack would be, and suggested that bessyboo and paraka, two vocal podficcers on twitter, should fight for the title.[6] She suggested that the fight should be determined "by taking pictures of microphones in their cleavage"[7], as both a reference to the 2012 conversation in the pod_aware podfcast (of which she was a part of) and as a reference to the shirtlessness prevalent in Teen Wolf, a popular show about teenage werewolves.

In response to the challenge, paraka posted a shirtless picture, with a mic between her breasts with the #podfictits hashtag. Bessyboo responded the next day with a picture[8] but by then others had already joined in.[9] While the meme's connection to the idea of a podfic pack stuck for some participants, seen almost as a requirement for entry to the pack[10][11], it quickly lost that context as people joined in out of appreciation and fun.[12][13]

In January of 2013, almost 30 people in the podfic fandom posted pictures of themselves for this meme. Most of which were retweeted on @podfic, a podfic retweet account, which helped spread the popularity of the meme.[14]

The idea of #podfictits remained in the mind of those who participated and/or watched it unfold, and there were multiple mentions and hopes for revivals in the tag on twitter after January 2013[15], however it wasn't until October 22, 2015 that new pictures for the meme were taken.

Dodificus, jenepod, and paraka, the hosts of the Auralphonic podcast, were discussing potential embarrassing topics for future episodes on twitter, when dodificus joked about doing a naked Youtube episode.[16] Paraka responded saying, "Look, I'll [do] #podfictits but naked video is a step too far. :P"[17] This, in itself, wasn't unusual and follows the pattern of the mentions that had occurred since the 2013 meme, however then miss_marina95 asked "ARE WE BRINGING #podfictits BACK??"[18] and paraka responded with a #podfictits picture.[19]

This round of #podfictits was slower to take off, but those who remembered it were quick to jump in and share their excitement.[20][21][22] Over the next day a number of podficcers posted classic #podfictits-style pictures, and those who had missed the first round of the hashtag were confused and asked for explanations,[23][24] receiving a variety of answers, some more accurate than others.[25]

The 2015 round brought new elements to the meme. First was the addition of alternative interpretations of the meme, such as joke pictures that followed the name/theme of the tag, but used pictures of the species of birds called tits, rather than a human model.[26][27] Exmanhater joked that she could post "the waveform of the sound my tits make when I take off my bra."[28] These alternative interpretations were made both as a joke, but also so those who were too nervous to post pictures of themselves to the internet could participate.

IV0611 also created an award, which she dubbed the Alpha Award after hearing the origins of the meme.[29] The title comes from the supposed battle to be alpha between bessyboo and paraka, and was awarded to bessyboo for posting the original 2012 #podfictits picture. After others expressed interest in receiving #podfictits awards, iv0611 started the process of defining new ones, but further awards did not come to fruition. 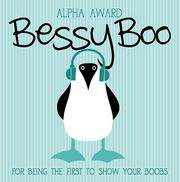 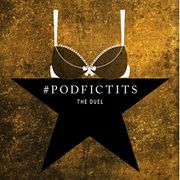 Dueling #podfictits cover created by iv0611
After the October 2015 revival of the #podfictits hashtag, paraka mentioned the hashtag and its history in the November 2015 episode of the Auralphonic podcast. While explaining paraka said:

My tits are the ones that started the, the real wave. Both times... Bess may have been the person who posted first, but I was the one who started the waves. I am putting that out there[30]

I AM CATCHING UP ON @auralphonic EPISODES, LISTENING TO THE FIRST AMA

LINDSEY, YOU DID NOT JUST

.@ParakaPodfic fine. I AM CHALLENGING YOU TO A CLEAVAGE DUEL

NAME YOUR SECOND, AND THE TIME AND PLACE*

*the place must be digital[32]

Paraka named miss_marina95 as her second[33] while bessyboo named reena_jenkins as hers.[34] Due to the fact that December is a busy time for podficcers due to ITPE, they set the date for the duel as "Before the end of 2015?"[35]

As commentary spread through podfic twitter, IV0611 commented that talk of duels reminded her of the song 10 Duel Commandments from Hamilton.[36] This eventually lead to LadyofMisrule using some of iv0611 changed lyrics and writing a number of filk[37] based on songs from the Hamilton's original sound track casting bessyboo as Alexander Hamilton, paraka as General Lee, miss_marina95 as Aaron Burr, iv0611 as George Washington, and yue_xi as Marquis de Lafayette, though the parts weren't always translated directly. There are also 2 songs that do not name specific podficcers for the parts. There was talk of recording the filk,[38][39][40] but no such recording has been released. The filk also prompted many podficcers and podfic listeners to start changing lines in Hamilton songs to fit the duel and podfic fandom.[41] 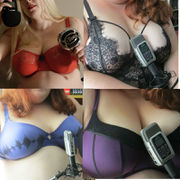 #podfictitsduel results featuring bessyboo in the top left, and paraka in the other pictures

The duel came to an end on January 1st, 2016 when it was decided that by both bessyboo and paraka showing up with boob pictures[42][43][44][45] their honours' were restored and no winner was officially declared,[46] though bessyboo argued that since paraka missed the official "by the end of 2015" deadline, bessyboo should be declared winner.[47] Dodificus suggested that bessyboo won for best styling and paraka won for best bra.[48]

When a picture is posted the direct responses are flattering and encouraging. Overall the reactions to #podfictits as a meme have been positive. Most have fun playing with the concept and enjoy admiring the pictures, commenting that podfic fandom has nice cleavage. [49]

Some joked that they seemed to be missing the point [50] since they were distracted by things other than breasts; #podfictits gave a unique opportunity to see which mics various podficcers used,[51] even commenting that it sparked a sense of closeness to see others using the same mic as them.[52] Others felt that they wish something more permanent could be done with the pictures, such as a calendar[53] or art show.[54]

The meme also gained some negative attention. For some seeing people's bodies on display and being invited to join in, left them with feelings of anxiety,[55] or shyness. At least one person commented on the objectifying nature of the pictures and their discomfort with the fact that faces were cut off, leaving the focus on breasts. Others were left nervous of reading their feed in public, due to the NSFW aspect of the meme. Overall though, the negative reactions were few and not very vocal.

There were also privacy concerns from some who participated. Due to the nature of the pictures, some participants locked their twitter accounts to limit the audience. A few people even chose to delete their picture once the meme had died down. At least one participant created a separate, locked twitter so they could post their picture.