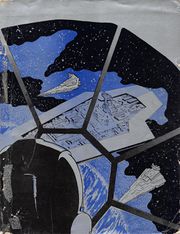 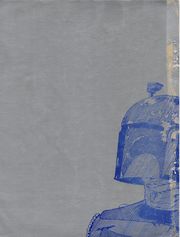 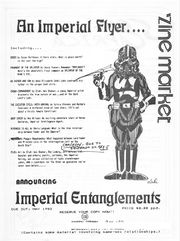 a flyer printed in Twin Suns #3, note the comment about the story Notions

Imperial Entanglements is a gen and slash 215-page anthology focusing on Darth Vader and other Imperial characters.

A related zine is The Sith Yearbook (labeled "Imperial Entanglements" #2 and #3).

This zine has art by Roz Ludwig, eluki be shahar, Jeff Wilcox, Kevin Martin, J.R. Dunster, and Carol Waterman. The flyer also stated that it had "poetry, cartoons, the Imperial Rating, our unique collection of tacky stormtrooper jokes, AND a candidate for The Other we guarantee you've never seen before."

The zine's flyer noted that it "contains some material involving same-sex relationships." These two stories are is "Deep Cover" and the other one is Hoth Admiral. The latter gained MUCH exposure and attention as it was a flashpoint in the 1981 attempts by George Lucas to control fan content, specifically in regards to that which included male/male relationships and what he considered explicit male/female relationships. "Deep Cover" likely escaped the attention "Hoth Admiral" got because while both stories take place in the Star Wars universe, "Deep Cover" features two original characters and "Hoth Admiral" features Admiral Piett, a creation of Lucas.

Actually, it was two years ago at Mos'EastlyCon in New York that I attended my first mediacon and gazed in wild surmise at the hive of scum and villainy...er. Dealers' Room. I noticed there were Trek zines and GALACTICA zines and SW zines; there were Luke zines and Han zines. Rebel zines and even an occasional Vader zine, but there was nary an Imperial zine to be found. Ah-ha! I said to myself; I have discovered a Crying Need: what fandom needs is a good outlet for stories from the Imperial point of view. I dropped this idea into a STAR WARS round robin of NFS and got back a ten-page rough fragment and a note from [ Barbara T. ] saying, 'My friend Sylvia has been writing some stories about Admiral Piett. Are you interested?" And with that, ImpEnt was off and running.

[snipped: many reasons this zine is late, including being mauled by a llama at the zoo...]

[Another reason the zine is late is that] Nevan DarLeras, protagonist of "Deep Cover" informed his author in the second draft that his love interest had changed from a female pilot to a male pilot (Sandemans are firm with their authors) and the artist backed out of illoing [that story] at the last minute....

ImpEnt got caught in the middle of the Great Lucasfilm Porno Flap. Maureen Garrett informed us that Lucasfilm did not want any stories in the STAR WARS universe with "homosexual expression of love," since this violated the "innocence" which "even Imperial officers must be presumed to have." "Oh really?" I said. Serzho Alyandi snickered. "Oh dear,"Admiral Piett said. "Whoever heard of an INNOCENT field agent," Nevan asked. I wrote a heated letter to Lucas protesting and presenting the idea of the entire population of San Francisco marching on Lucasfilm offices with torches and pitchforks in outrage. Maureen batted her metaphorical big blue eyes at me and said, "Who US --- bigoted?" and Lucasfilm backed down on the issue. ImpEnt went ahead and published, and here we are with #1.

I won't say much about the stories [in this zine], since I think they can stand on their own. There are three new fan universes introduced here that I think you'll see a lot of in the future. Devra Langam's Vader vignette is part of a long and interesting story I hope to pry out of her for #2. Eluki's CROWN COMMANDMENT and CANTATA introduce a fascinating new character who is unique in fan fiction as far as I Know. I'll let you meet her for yourself; all I'll say about her is that Lady Mara is NOT Eluki's alter ego...I hope... Finally, ImpEnt has the first story in the Tennison/Stevens EXECUTOR Cycle universe, which I've discussed in my afterword to "Hoth Admiral". There's nothing a reader likes less than having the editor shove her enthusiasms down the reader's throat, so I'll shut up except to say I've fallen in love with the main characters and I hope you like them too.

Then there's a subtle and realistic study of the nature of power and loyalty by Susan Matthews in ORDER, a —ahem—somewhat Strange parody of SPLINTER OF THE MIND'S EYE by resident iconoclast non-sufferer of fools, Joyce Yasner, and, to confuse the reader completely, TWO versions of the final confrontation between Luke and Vader by Anne Elizabeth Zeek.

Force willing, there will be an IMPERIAL ENTANGLEMENTS #2, so if you have a manuscript, send it along too. Our editorial policy is that we'll print anything that's well-written enough to convince the editor of its literary merits, although we WOULD like to have an Imperial in it somewhere (although we'll be glad to take pro-Rebel stories as well as pro-Imperial ones.) We do not Intend to be intimidated by Lucasfilm's "guidelines," but we don't want X-rated fiction UNLESS it has strong characters and believable plot as well.

[zine]: I enjoyed SITH YEARBOOK and IMPERIAL ENTANGLEMENTS primarily for the Piett/Serzsho stories. I just loved that little guy; the stories are spellbinding. Besides the fascinating alien culture of the telepaths, and heartwarming romance, I enjoyed the detailed portrayal of Life In The Emperor's Service. Those little touches like "clone loaf." [1]

[zine]: The stormtroopers' and Darth Vader's sartorial predilections notwithstanding, things are not purely black-and-white even in a galaxy long ago and far, far away, as Karen Osman has set out to prove. After all, there must by some good guys around in the Empire. And she has found some. For me, the most likable Imperial white-hat is Nevan DarLeras in 'Deep Cover.' The author manages to imbue even Darth Vader with honor and Obi-Wan-like foresight, without at the same time diminishing Luke's virtues. Indeed, everybody in this 70-page novella is agreeably sympathetic to some degree, even the boo-hiss villain, Veltar, who at least makes the Teibarran hospitals run on time... [This story] is half of what's worthwhile in Imperial Entanglements. The other half is the long story 'Hoth Admiral.' Cycle one of a new series, the 'Executor Universe.' it is an alternate universe to TESB involving Admiral Ossel and Captain Piett, plus an extremely engaging character named Sersho Alyandi. As in 'Deep Cover,' the love interest is a male-male one, and the characters are very well-drawn... Unfortunately, the shorter pieces don't approach the level of these two in character or situation appeal. 'As Father and Son' involves mythopoetic forces instead of real people... 'Crown Commandment' and 'Cantata' present Vader's consort, the Lady Mara (how come characters like this are always named Kara, Lara, or Mara?), who runs around in a scarlet version of his mask and robes, stirring up trouble... 'Order' offers a most complex and real view of Colonel Veers succumbing to the Dark Side by equating peace with order, but the man is so straitlaced and dry, and the situation between the warring Merrides and Jilkar so confused, it becomes impossible to care about the story... 'Fragment of a Splinter' is a windup of Splinter of the Mind's Eye that gives Darth back his arm and sets him, Luke, and the steel kitten back to taw after the events of Alan Dean Foster's crummy novel... The computer printout typeface is unusually readable, but storage must've been a problem, for there are a number of queer typos and misspellings. J.R. Dunster's illos are the most evocative in the zine, though Eluki's are exceptionally well-balanced, and Jeff Wilcox's illos for 'Deep Cover' have an amazing solidness and presence despite their Marvel-cartoon type.[2]