In the USA and other Western countries fanart in the modern sense of the word dates to at least the 60s and 70s, if not earlier. It was especially prevalent in the Star Trek and Star Wars fandoms. Other TV shows, such as Starsky & Hutch, The Professionals, Beauty and the Beast, and other 80s and early 90s TV series (and some movies) had a noticeable fanart presence. Fanart was also created for highly popular books like The Lord of the Rings.

To me, artwork is simply another form of fan fiction, one than utilizes the visual - as opposed to verbal - medium to express a creative idea. I think it could even be argued that art-as-fanfic is evolutionarily closer to the original source than the stories; after all, Star Trek was born in a visual medium and, even with the proliferation of pro novels and fan fiction, it remains in our unconscious as a collection of visual images. All someone has to do is say "Spock" or "DS9" and we can all immediately picture that image in our minds, but ask us to describe it and...but, then, that's what fan fiction is for, right? [1] 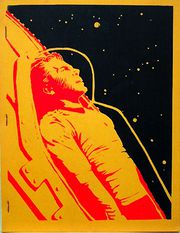 Fanart was part of zines, traded on its own, auctioned at conventions, or sold through the mail. In zine fandom, fanart was often used as cover illustrations for fanzines and as story illustrations.

The cost of printing art, especially fanart that was not simple b/w lineart, had a significant part in rising zine costs as printing technologies evolved and fans appreciated better art reproduction and color covers in zines[citation needed][2]. Some zine publishers were especially adept at art reproduction, for example the Star Trek zine Interphase from the 1970s is often mentioned for the high printing quality:

"On her first issue of Interphase, printed in 1975, Connie Faddis employed a method called silk-screening for her cover – a detailed, time-consuming project which only an accomplished artist like Connie would have the skill to pull off. But the rest of us settled for what we could learn and do more easily. Artistically, Interphase set the bar for all the zines that followed, in more ways than one."[3]

In a counter trend, some fans felt that fanart was not worth the high costs of fanzines, and this led to no-frills zines without art, such as published by Almost Foolproof Press or Oblique Publications. 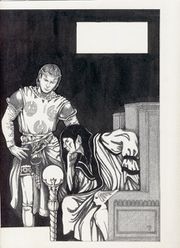 base artwork used for the cover of Naked Times 8 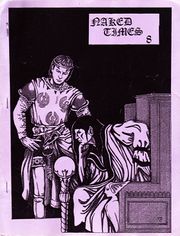 colorized version of artwork used on Naked Times 8, the color is provided by the use of purple construction paper

However, the majority of fan art produced in these early days of fanzine production was limited to black and white line art due to the use of stencils and mimeograph machines. The artwork could be traced or pressed against the paper, thereby transferring the artwork lines to the zine. Color was supplied via the underlying paper. Even as xeroxing became more available to fanzine publishers, cost kept the bulk of fanzine art in black and white, with only a color cover, or at most an interior color frontspiece. 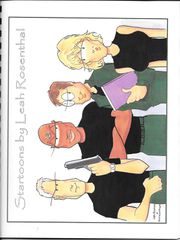 There is said to have been a prevalent notion that fanart, especially for live-action fandoms, should be in a "realistic" illustrative style. However, it is worth noting that the fanart published in zines in these fandoms varies in its level of realism — from near photorealism to quite stylized — and many fans actually prefer less realistic styles.[4] In contrast, book- and comic book-based fanart was not held to such restrictions. There has also been room for cartoon art in tv fandoms, such as Leah Rosenthal's cartoons in Blake's 7, Highlander, Stargate: SG-1 and others.

The demands of portrait drawing might have discouraged some artists, but others excelled and were in high demand. Popular fanartists often had a distinct style that made their work easily recognizable. For example, Gayle F's work has been described as very stylized yet lush, moving easily between simple portraiture and elaborate and sometimes explicit story illustration. Suzan Lovett's art, on the other hand, is not only very realistic, but also often an elaborate composition of different elements in the stories the artwork is illustrating. Illustrating a fanzine can mean that there are several pages with illustrations by the same artist. For example, Lovett's illustrations for the Professionals novel All the Queen's Men included a color cover and six pages of illustrations in comic-book style, with multiple panels and text picking out key themes; for the story Wine Dark Nexus, she had seven black and white illustrations; and for Harlequin Airs, she created four color images (including the cover) and twenty-one black and white illustrations.

The Effect of the Internet

When fandom moved online, it was mostly fanfiction that developed an online presence. Some fans who enjoyed the zine illustration tradition feel that the internet led to a decline in fanart:

"Yet overall, as fandom has moved away from the print zines and onto the Internet, artwork has taken a much less important place. It's one of those things that I most deplore about posting a story online. You never get to see an artist's rendition of your scenes."[3]

"The icing on the cake—and what the web has yet to reproduce in the same way and with the same quality as well as quantity—is the fan art. 'Zine fans buy a fanzine as much for the art as the stories that accompany the illustrations. Illustrations bring the stories to life, and are what truly set fanzines apart from online fan fiction.[5]

"Fan artwork also has seen the effects of technology, as photo manipulations and computer-generated work have taken an ever-increasing position in fandom—on Web sites, at convention art shows, and in zines. Hand-drawn and hand-painted fan artwork is much less common than in decades past. New fan artists are not being mentored up to take the place of fan artists who have moved on. [...] For the newer fan, the average 'net fan, the increased prominence of computer art doesn't seem to be a problem, but then, they can't miss what they never knew. [...] But fandom has a history of thousands (and thousands) of fanzines graced with illustrations that are amazing in their quality, variety, and distinctive styles. It's an era in fan artwork that will never be seen again, and that's a damned shame."[6]

The split between fanart and fanfiction that occurred when western, live-action media fandoms, moved to the net gave some fans, who first encountered these fandoms online, the impression that in the English speaking world fanart lagged behind fanfiction in general, although it was only true for online media fandom where fanart was not as prevalent as fanfiction.

This impression is especially strong when contrasted to Asia, notably Japan. Many Asian countries had a highly visible fanart culture, most notably in the form of small fan comics called doujinshi. In some western media fandoms fanart comics were produced as well, yet these tended to be amateur original works and not fanart in the modern sense of the word. While doujinshi can be more traditional fanfiction-type fanzines, they can also be, and often were, fanart-driven. Many doujinshi were short, often comical, fan comic books based on popular cartoon and TV series in Japan. Anime series of the 80s and 90s that had a considerable doujinshi following in Japan included Yoroiden Samurai Troopers, Saint Seiya, Sailor Moon, Fushigi Yuugi, and others. Doujinshi was also produced for western television shows such as Star Trek: The Next Generation and The A-Team. Often the characters were drawn in a more "Traditional" manga style and there was little attempt made toward the more portrait realism seen in western fanart for these series.

In the early and mid 90's Japanese cartoon increased in popularity in the USA and fanart began to be created for these shows. These fandoms did not have an expectation of a 'realistic' portrayal of characters, which may help explain why fanart began to be not only drawn more often, but drawn by younger fandom members, especially teens and pre-teens. This is not to say the teenagers had not previously drawn fanart, but there was a noticeable increase in fanartist numbers in this age bracket. 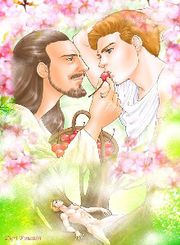 At the same time, the rise of the internet made it easier to distribute fanart for other members of fandom to see and appreciate, thus making fanart more visible and more likely to be tried by someone else. Another area where fanart noticeably increased in popularity was in the Harry Potter fandom. Again this was a fandom in which portrait-like realism was not expected, and another fandom that profited from the use of the internet. Aside from anime fanartists, Harry Potter is often considered to be one of the most fanart driven fandoms.

The first time anime fandom and western media fandom met was in Star Wars: The Phantom Menace, which was the fandom that swallowed all of (media slash) fandom before Harry Potter became big, and The Phantom Menace fanart documents this meeting of different styles and traditions. With the rise of Harry Potter fandom and fanartists moving from the anime and Harry Potter fandoms into other fandoms, fanart became increasingly visible again in both older and newer TV, movie, and book fandoms. Giving these "live action" characters a more 'cartoon' look became more accepted among fans.

Currently, fanart is a highly visible and popular part of many fandoms across the genres. It is still most noticeable in anime and Harry Potter fandoms. However, it is also seen in a diverse range of fandoms including Stargate SG-1, Stargate Atlantis, Supernatural, Merlin, Marvel comics, and other popular TV series, books, comics, and movies. Today, many websites which focus on user-generated content, such as DeviantART and Pixiv, have an almost continuous influx of fan art along with non-derivative works.

Recently, newer online posting formats such as Big Bangs and Reverse Bangs (akin to Big Bangs but with the artwork created first and inspiring the fic) show a return to the old zine tradition of collaboration between artists and writers.