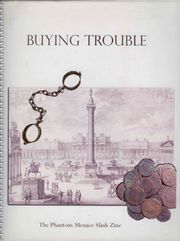 Summary: Quiaius, a widower living alone with his cats and books, goes shopping for a housekeeper, and instead buys a starved, filthy and badly abused wild Celt who would otherwise have been sent to the Coliseum.

Buying Trouble originated as a lurid fantasy in my Latin class.

I went back to school at age (indistinct mumble) to get my bachelor's degree, and to my horror, I discovered that I would be required to take a foreign language — something my Florida public school education had not prepared me for. I figured that since ANY language would be hard, I might as well pick a good one, and that's how I wound up taking Latin. In the first few weeks, we learned words like puer (boy), poen (punish), and crustulum (cookie). I started putting together a little story to amuse myself during the boring parts of the lectures.

A couple of years later, Ruth Gifford posted a challenge to Master_Apprentice, an email list devoted to slash fiction about Star Wars: The Phantom Menace's Master/Padawan team, Qui-Gon Jinn and Obi- Wan Kenobi. The challenge: write a short scene, putting the two leads into a different time, a different place, and different clothes. I wrote a little piece that incorporated my Latin-class fantasy. That turned out to be the first chapter of Buying Trouble.

I posted Buying Trouble as a work in progress, starting in November 1999. It was my first serious piece of writing, and I was astonished at the amount of positive feedback I got — I was really encouraged to write more. People would ask me what was going to happen next, and I really couldn't say, because I was never quite sure — the characters seemed to take things into their own hands.

I very loosely translated the Phantom Menace characters into ancient Rome (a rather anachronistic ancient Rome, at that). Qui-Gon became Quiaius; Obi-Wan became the young Celt, Eab. Other characters included Ouiaius' friend Macius (Mace Windu in the movie), Sima (Anakin's mother Shmi), and Yodala, a gender-switched version of Yoda. The movie's Senator Palpatine was reduced to selling boys' clothes in the Roman market, while the drummer from the band Magnetic Fields has a cameo appearance as Ouiaius' late wife Claudia. Several of my cats, both late and living, have pivotal roles as well.

A few months into writing the story, I got an email from MaliWane. She mentioned that she'd imagined Sima, Macius' cook, writing a letter to one of Ouiaius's former housekeepers, telling her what had happened in her old master's household. Later, I needed a very ethical Roman soldier— a catalyst for a plot point — and asked Fliper Bunny if I could borrow a character who appeared in her Bonds of Choice series. Not only did she agree, she sent me a couple of short passages written from his point of view — they didn't belong in the actual story, but they were too good to just keep to myself.

When I finished Buying Trouble in May 2000, several people suggested that I publish it as a zine. I didn't think just the one story was enough for a zine — but then I thought of MaliWane's letter, and HiperBunny's soldier... I got up my nerve, and asked a dozen of the best writers in slash if they'd contribute a short piece from the point of view of a character in the story. The result is what you see here: eleven "bonus tracks," focusing on everyone from Pliny the Elder to an oak tree. I also got illustrations from some of the best artists in fandom.

My deepest thanks to everyone who contributed, and to everyone who enjoyed Buying Trouble and encouraged me to continue. Particular thanks are due to my husband Doug (who has never let me forget that I was really going to do this zine!), and Master Ruth. Fox, the best beta in the known universe, and Gail Riordan, an extremely professional copy editor, gave me invaluable assistance in putting this zine together, and any mistakes in it are my fault, not theirs.

This project has led to many wonderful things, including some of the best friendships of my life, and a new enthusiasm for writing — both slash, and original things. I can't thank you all enough.

"This story is so AU even the characters names are different. They just happen to look like these guys. I'll admit. I like it though, the historical descriptions of the time period were vivid enough that I could picture it so clearly. The writing was wonderful and I love the way the Celts were represented and spoken of in this. [...] The slave thing threw me off at first, but there isn't any real master/slave relationship here. This isn't a b&d s&m story either. If you like the time period of about 2000 years ago and the Celtic culture and what it's mysteries could hold you might just like this."[1]

"[darthhellokitty] began this ancient Roman AU with the description: "Quiaius, a widower living alone with his cats and books, goes shopping for a housekeeper, and instead buys a starved, filthy and badly abused wild Celt who would otherwise have been sent to the Coliseum." Little did we in our innocence then, beginning the first chapter so many years ago, realise the extremes of tears, joy and sexual suspense [darthhellokitty] would drive us to. And least you young ones (she says bitterly) don't have to wait for the next episode to land in your mailboxes. The characterisation is consistent and concise: this is Qui as the gentle, somewhat bewildered scholar; Obi-Wan as the courageous, if battered young pagan priest; and a delightful array of familiar faces sprinkled in the appropriate places. But [darthhellokitty] uses all the rest of the 200k to wrack our emotions. Reading Buying Trouble is to be wound around the writer's little finger, and played with like a yoyo; but the experience is irresistible."[2]

Roman gentleman, Qui-gon, is always picking up strays, but this stray -- a Celtic slave named Obi-wan -- ends up changing his life, in Buying Trouble by darthhellokitty.[3]

buying trouble, by darthhellokitty. qui/obi(ancient rome au). nc-17. warnings: reference/flashback to non-con. quiaius, a kindly widower shopping for cat food, instead buys a beautiful and frightened celtic slave. oh, it's cute. the cuteness is, at times, painful. don't say i didn't warn you.

After the online publication the story was later published in a 111-page zine with POV pieces from MaliWane, HiperBunny, Catnip, Destina, Emu, Fox, Gloriana, Pumpkin, Mrs. Hamill and Master Ruth as well as poetry by Gail Riordan.

It will include this story, AND -- I am SO PROUD to have this to announce -- BONUS TRACKS, by some of the very best writers in this fandom! These bonus tracks are stories surrounding the original story, written from the point of view of others involved, ranging from the goddess Diana to a migratory bird. I can hardly believe the beautiful work these writers have done, and I think you'll love it! I hope to have more to tell about this zine in a few weeks, as I gather everything together and get it ready for printing.

The zine has a color cover and eight illustrations by Alice, Barbana and Qor-Ynn, plus a full color inset by Fuumin.

Fox describes how the bonus tracks came to be:

I was still quite new to fandom, and therefore very flattered to be asked, when [darthhellokitty] asked me to write a "bonus track" for the 'zine version of her epic Buying Trouble, which had been well in progress when I first arrived. I remember noticing points at which [darthhellokitty] assumed, even almost required, that the reader be paying careful enough attention to the story to remember details from earlier installments -- which, when a thing is posted serially with who-knows-what frequency, is by no means guaranteed. But that kind of faith in one's readership is something I don't see as often as I'd like in fandom, and I've been pleased with [darthhellokitty] ever since for displaying it.

The "assignment" for the "bonus tracks" was to tell some part of the story of Quiaius and Eab from some other character's point of view -- in other words, it was right up my street. My POV character is (listen carefully, because this is the only place I know of where this is explicitly revealed) Diana, goddess of the moon, chastity, and hunting, and I had great fun working in random references to what I remembered of Roman and Greek mythology.[5]