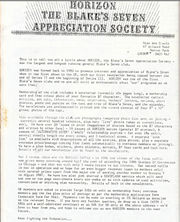 It was founded by in the UK by Pat Thomas and Diane Gies in 1979.

Its newsletter (the Horizon Newsletter) was sent out to around 300 members beginning in the spring of 1980.

Their website went offline in 2008 and then reopened in September 2009.

From the club's FAQ:

"So what does the Horizon Club do?

Up until 2001 the club produced regular magazines which kept its members informed about anything occurring to do with Blake’s 7, such as conventions, actors’ appearances in films, theatre & TV, and any other special events, as well as all the latest news on B7 related merchandise such as the long-awaited DVDs. We have continued to provide a comprehensive news service using our Yahoo Groups email bulletin service which currently has over 700 members. The magazines also contained interviews, reviews, competitions, LOCs and encouraged fans to contribute to the magazines and meet up with other fans on a regular basis.

Over the years, regular get-togethers were held, enabling members to meet and keep in touch in the UK. Groups got together to see the B7 cast at the theatre, go out for the day or weekend on B7 Location visits and many fund raising activities were, and are still, arranged. The club continues to offer a mail order service on all the latest B7 merchandise, including the episodes on DVD and video, the BBC’s two follow-on radio plays and other CD/videos featuring the original B7 cast members. Other merchandise includes fan fiction magazines, technical manuals, interviews books, photos, fridge magnets, T-shirts, gift items, etc. Information on some of the merchandise currently available is already listed in the website Database in the merchandise section, with more to follow."

"The southern regional group of Horizon can be contacted via Serena Trent [address removed]. We meet about once a month, play Quasar, read scripts, swop zines, have quizzes, etc. I think playing Blake's 7 charades at the annual Blakewake was probably the most hilarious thing we've done yet. (If it sounds boring, just try making some poor sucker mime "Harvest of Kairos") We don't actually have very much to do with Horizon. We also have a small zine, "Voice from the South".[3]

"Judith mentioned Blake's 7 charades at Blakewake. Lucy and Dennis Collin in the Terra Nostra, the South-East group, came up with Blake's 7 Pictionary. I think trying to come up with sketches which says "The Rule of Life" or, indeed, "Harvest of Kairos" compares quite well with miming it out!"[4]

The Blake's 7 War began in late 1988, and many club members were active participants.

From time to time, club members would seek to change the club's policy on advertising or linking to adult material.

This proposed change likely had to do with a lot of history, aka The Blake's 7 Wars, as well as the club's high profile with the powers that be's close association with the club and the desire for "respectability."