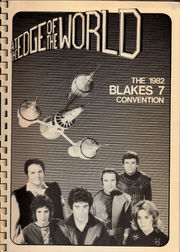 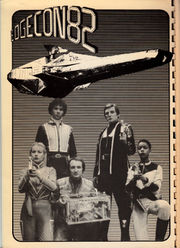 back cover of the program book

There were approximately 475 fan names listed in the program book as attendees. 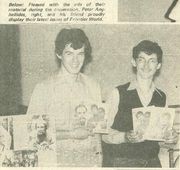 Guests included Peter Tuddenham, Chris Boucher, Mat Irvine, Tony Attwood, Sheelagh Wells, and (surprise arrival) Gareth Thomas, who presented the prizes at the end of the convention. Michael Keating was due to attend, but was delayed as the play he was performing in finished late.

Programming included talks by Irvine, Tuddenham, Boucher, Keating (cancelled); cosplay competitions in three categories (Blake's 7, sci-fi, and "plain way-out") and other competitions, viewing of B7 bloopers and other films, a B7 Mastermind competition. The BBC Effects department also displayed many of the models used in the programme.

Presumably the convention took its name from the series 3 episode 'City at the Edge of the World'. Its con zine was Edgezine.

There are photos and con reports in Horizon Newsletter #8. The convention was also reported on in Marvel's Blake's 7 Monthly #14 (November), which reported that "those followers of the show who have launched into print their own BLAKE'S 7 stories were hard at work. Business was brisk as latest issues of Horizon, Frontier Worlds, Standard by Seven, Slave, etc, sold like hot cakes."[1]. Peter Anghelides, future Big Finish/profic writer, was among the fans pictured and named.

Con Accounting, and a Big Check

As well as the con zine, Edgecon produced a 22-page con program, which contained biographies of the lead characters and production staff, as well as a programme of events.

This event was interesting, in that we had two venues and had to walk from one to the other...which made for some very interesting reactions when everyone taking part in the Fancy Dress Competition had to walk about in broad daylight!

Highlight? Due to the amount of traffic, some of us from far flung places like New Milton and Waterlooville had to wait in the 'Bull' for the Traffic to die down.....as did Mr Gareth Thomas and wife who returned to the pub for the same reason!