You may be looking for the B7 zine Web of Interaction.

The Web is a gen Blake's 7 anthology. Art by Harry Eckman, Jo Jobson (front cover and back cover), Tim Pieraccini, Janette Harris. "The zine is not, strictly speaking, a Horizon publication but rather a private publication of Horizon president Diane Gies." [1]

Comments on the First Two Issues

Top of the sale heap is The Web. Blake's not in either story and the second one is nearly unreadable for an Avon-atheist. [2]

In 1989, the zine was advertised by Horizon with these comments:

THE WEB -103 pages, A5 prof, printed booklet (new reprint/revised version - ie the ending of story 2- The Alternative Rescue has been improved. Anyone with the 'old' version who would like to see how Jackie has improved it can send an SAE + extra 19p stamp to Jackie Ophir for photo copies of the 'new bits'. Please quote zine No. if one appears on the title page in pen (most Webs are numbered). This is not an 'official' Horizon zine, but produced by your Club Sec. Diane Gies, and available from her direct, OR Ann Steele. Cost is £2.25 + 40p p & p (UK). Contents: 'These Our Actors' by Sharon Eckman (authoress of 'Eclipse' in HORIZON 1) - 42 pages. Set at the end of Series 3, before 'Terminal' it particularly features Cally, Avon and the mystical Alayn -- has Avon finally met his match on this mysterious planet peopled by a dwindling band of dedicated Actors? 'The Alternative Rescue' story conceived by Diane Gies, and written by Jackie Ophir (62 pages). This describes what might have happened to the surviving crew after 'Terminal' if Dorian hadn't come along. Told from Vila's viewpoint, from the events immediately following 'Terminal', through their capture by passing slave traders and arrival on the pleasure planet Dorado (as slaves) and their subsequent adventures, introducing 2 new friends... or enemies? Also some terrific artwork by Jo Jobson (incl. covers), Tim Pieraccini,, Janette Harris and WEB logo by Harry Eckman. Due to popular demand, work is under way for THE WEB 2 - but I wouldn't DARE to give you a date. [3]

The zine is not, strictly speaking, a Horizon publication but rather a private publication of Horizon president Diane Gies. Sharon Eckman and Harry Eckman are her siblings.

[Issue 1], the only one I've read, is surprisingly close to an adult zine, particularly the second story, in which a male crewmember is to be chosen as a stud for a woman from a planet whose males are sterile. I do think the selection of Avon (after a flirtation with Vila) in this case was illogical; surely, if it were for purely biological purposes, Tarrant would be a better bet! He must have a far higher sperm count, judging purely on the basis of age. Most sperm banks won't accept donations from men over 40, and some have an age limit of 35. And donors in their early 20s are considered the ideal. (I wonder whether teenagers would be even better, or whether there are biological as well as legal reasons for preferring adult males? In women, although pregnancy in the teens is certainly possible, it's considered preferable medically as well as socially to wait until one is fully grown; but the consideration of being fit enough to carry a pregnancy to term without bad effects wouldn't apply to males.)

There's even a brief glimpse of Avon in flagrante with the ocf, and if this zine weren't being marketed by Horizon as a gen zine, I'd at least consider rating it as adult. But my major criterion (though not the only one) for distinguishing between gen and adult is what the publisher thinks it is. [5]

Yes, the cover is related to story content. No, said story doesn’t make a lick of sense. A planet of Shakespearan actors, a charismatic bad guy, Cally falling for this guy for no discernable reason, Avon going insane. If there was a point, I missed it. Still enjoyed reading it. I have no problems with the concept of a Planet Shakespeare (not what it was called in-story, but that’s how I think of it.) I do have to raise my eyebrow at Tarrant being something of a theater snob. They really taught Shakespeare in the Federation Space Academy? (Then again, it would explain Tarrant’s usual choice of outfit.) [6]

"This is not a large zine by the standards American fandom has become accustomed to, containing only two stories, a few (but attractive ) illustrations, just over 100 pages, and no incidentals at all. The two stories are both readable, and the two artists who account for most of the illos, Jo Jobson, and Tim Pierocini, deserve more exposure in fandom. I appreciate the trouble a British zine editor may have with art, when mimeo is the only economical medium, but it's a pity that these two talents have rarely been seen by American fans. The publisher is a member of the Horizon staff, and the zine's production values reflect it. These two stories are longer than is feasible for the club's fiction zine, and as an appreciator of the well-written longer story, I am glad they've been made available.[7] 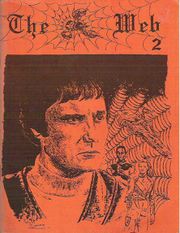 The Web 2 was published in 1993 and contains 96 pages. Art by Harry Eckman and Fliss Davies. 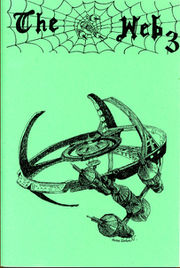 The Web 3 is a 98-page novel called "Seas of God" by Sharon Eckman. It is crossover with Star Trek: Deep Space Nine and was published in 1995. Artwork by Tim Pieraccini, Susan Pardue (cover) & Harry Eckman.

In a discussion on the lysator B7 mailing list in April 1998, people referred to the "famous Bajoran freedom fighter Ayvon of the Seven" in the ST:DS9 novel "The Siege".

The reference is just a tossed out reference, the character does not appear. It was something like, "as Ayvon of the Seven said, 'I am not expendable, I am not stupid and I am not going'" -- said by Kira in the DS9 novel, "The Siege".

However, Sharon Eckman (and Harrison A. Miles) picked up on this and did a DS9/Blake's 7 crossover, "Seas of God" in The Web #3. It was excellent -- and has quenched any desire I felt to do the Blake's 7/TNG crossover I was working on a few years ago, because they've already done it, and done it right. Hotbed of Bajoran politics, plot and counter-plot, and everyone's in character -- even Orac (heh, heh, heh...) [9]

Wormhole spits out both Servalan and the Liberator (3rd season version). Intergalactic political incident ensues, because this is Bajor and DS9, and a political kerfluffle ensues every time there’s so much as an ill-timed fart on the station. Blake and the Liberator crew are Bajoran legends, utterly mystifying the Liberator crew, who don’t recall ever visiting Bajor before. (Maybe ancient Bajor got BBC TV?) [10]