A Statement Written by Diane Gies on Behalf of the Horizon Committee was published in Horizon Newsletter #22 in June 1989.

The subject was The Blake's 7 War. 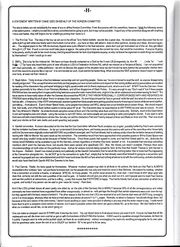 It is quoted in full here (with full names abbreviated) on Fanlore, as to not lose any of its points or context.

The above letters are not necessarily the views of any or all the Horizon Committee. From discussions with the committee, however, I think the following covers a few salient points. I shall try to read this to all my committee before going to print, but it may not be possible. I hope if any of the committee disagree with anything I have said below, they will forgive me for unwittingly putting their name to it.

1. The Pro-Con Tour. The idea of the tour as set out in the official Terry Nation bulletin sounds like a great idea. No doubt ideas were discussed that do not quite match up with what was finally said in the bulletin, but so what... you have an idea, talk about it, listen to other opinions, revamp your ideas, discuss it again, etc... The original plans for the 10th Anniversary Appeal were quite different to the final outcome - plans don't just get formulated out of thin air, they get talked through A LOT first. If such a con tour could lake place at approx. the same price to fans as the current fan cons, that would be marvellous. If anyone IS going to be greedy, and try to ask for too much money, the thing would founder for lack of participants anyway, so why not leave the organisers to work things out sensibly by themselves? I wish I could go to one!

2. BNFs. This is by far the trickiest bit. We have not been directly contacted as a Club by the 3 main US protagonists (ie. [Ann W], [Linda T], [Leah R]) so have only heard their point of view officially in LOCs in Federation Archives NL (which we receive on a Reciprocal Basis). I am not acquainted with them personally, so - unlike politicians - we will not discuss this aspect of the situation since we don't know the facts behind the personality clashes here. And if this sounds to anyone like a 'cop out' -it is not intended as such, it just seems the fairest thing. What is termed the 'BNF syndrome' doesn't seem to happen over here [in the UK], at least not that I know of.

3. Slash fiction. Tricky to draw a fine line between censorship and not upsetting people. Some say "no-one is forced to read the stuff, so anyone disapproving should just ignore it." Fine, except that when one finds out that people you have come to admire and respect for their acting abilities and/or personalities are revolted by reading of the characters they portrayed indulging in highly questionable and (to them) unpleasant acts, what is one to do? APART from the Darrows, I have spoken personally to four others of our Honorary Members, and all four disapprove of Slash Fiction. It's easy enough to say "Don't read if but if these people KNOW that fans are seeing their images performing homosexual and/or sado-masochistic acts, mightn't it be rather unpleasant and embarrassing for them? The issue seems to have really taken off after the Darrows discovered that PEOPLE THEY KNEW PERSONALLY, CORRESPONDED WITH AND REGARDED AS FRIENDS were writing this stuff about them' or at least, their characters. It's one thing to know that 'fans in general' write the stuff, but when it's someone you've had tea with., it it were me, I'd be VERY embarrassed, wondering whether these people were getting possible ideas for these type of stories while we were together, just talking... think about it. Even in these 'liberal' times, some people have always and WILL always feel uncomfortable about certain things. We should respect that. And really, a lot of the Slash written seems to not be about B7 at all. The characters bear no resemblance to ANYTHING we ever saw on screen. It's a bit like Tony Attwood's 'Afterlife' - he wrote the book using the names of Avon and Vila, but they were Avon and Vila in name only. Similarly, much of the Slash fiction is just pornography pure and simple - using the names to call it B7 fiction, but some people are just wanting to write pornographic stories. If you want to write homosexual/sado-masochistic/porno stories fine, but why not call the characters Fred and Tommy instead of Avon and Blake or Avon and Vila. Then one could read your stories on their own merits and avoid upsetting real people.

4. Gambit convention. Rumours abounded at the time that the Con Committee 'withdrew Paul's invitation out of spite', possibly fuelled by Paul's own comment that his invitation had been withdrawn. As far as I understood it (from being there, and having several discussions with some of the committee who I know fairly well) the Darrows were originally invited well BEFORE any problems emerged, and Paul had already had to subsequently refuse the invitation because of starting touring with 'Alibi for Murder' the same week as the convention. The committee would then have approached other possible guests to fill the Guest Space now vacant who they couldn't invite earlier because of limited finances. Once these guests had agreed to come, and had their tickets paid for, etc., obviously the money would therefore not be available to pay for the Darrows, entirely regardless of whether they were 'wanted' or not. It is possible that individual committee members didn't want the Darrows there, but equally there were several who specifically DID. Alas, the money just wasn't available. Perhaps there were misunderstandings on both sides on this particular issue. And as for various rumours being spread by 'fans' at the time that Gareth Thomas is 'anti-Darrow' in the dispute... Rubbish. Gareth has stated privately and publicly (at the Gambit Convention) that he would like nothing better than to have had Paul appearing at the Convention alongside him. He did NOT go to the convention to 'spite Paul', simply that he had already committed himself to going to a convention (and received his prepaid and non-refund able ticket) and didn't want to let down the 95% of fans who had nothing whatever to do with the controversy, and who doubtless would also have liked both Gareth AND the Darrows to be there.

5. Paul Darrow. Really, the facts speak for themselves. Whatever 'motives' people may wish to attribute to his actions, the facts are that Paul is ALWAYS accessible to the 'ordinary' fans - not just those he knows well, but the people who may only ever meet him once in their lifetimes. He makes the meeting - whether it be a convention or outside a theatre, or whatever, SPECIAL for those people. He and/or Janet answer ALL their mail - I don't know of ANY other actor who does that, certainly not with the vast quantities of fan mail he gets. A Fandom should give you what you want out of it, and if people want to meet Paul Darrow and see him perform at conventions, and he is willing... surely that means that EVERYONE is happy. Paul works bloody hard at any convention at which he is a guest, and surely if any person can be said to give 'value for money' - Paul does.

And if the LOCs printed above all seem pretty one sided (ie. on the side of the Darrows] this is MAINLY because 95% of all the correspondence and verbal comments we have received have supported them either unequivocally, or almost so - with perhaps the thought that certain statements were a bit 'over the top' but they agreed with the basic reasons behind it. The other reason is that the very few LOCs we received of an anti-Darrow slant were all VERY long, averaging out to 5 or more pages, whereas what we have printed above are almost all around 1 to 1 1/2; pages. Normally, to obtain a 'balance' I would edit things down, but because of the very nature of the controversy, I daren't touch anything in case I were accused of altering in any way what the writer meant to say. I really would have liked to print a complete cross-section of opinion, but it wasn't possible unless (like some) we gave a whole NA. up to the issue. We don't believe that is what our members would like, so we aren't going to!

One can make an eloquent case for EITHER side if one has the mind. You can distort facts to fit whatever theory you want it to fit. It is just my hope that all the unpleasantness will die down soon and let us get on with the business of ENJOYING this fandom. If BNFs want to squabble amongst themselves, let them do it quietly. If people want to write and/or publish slash, let them do so unobtrusively without overstepping the mark into revolting pornography for its own sake. And for goodness sake, leave the rest of us to ENJOY our fandom - B7 is too good to throw away.