Debra Fran Baker's Fan Fiction is a website with fanfiction by Debra Fran Baker. The site was listed in the Slash Fan Fiction on the Net index in 1998[1] and it is a member site of the Fanfiction Critics Association and the Chakotay/Paris Support Group. 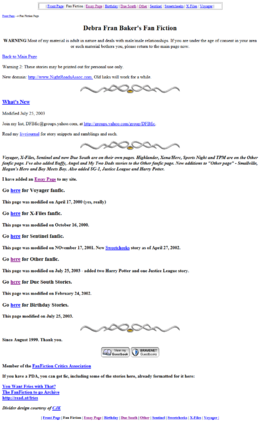 Memory (Janeway/Chakotay) Spoilers for "The Hunter." Janeway and Chakotay, together my way.

Holidays (Chakoay/Paris) It's *that* time of year again.

Fire and Rain (Chakotay/Paris) This was my first story. Chakotay helps heal the scars of Paris' past. Character death.

Home The end of a journey - maybe. This was actually written before "Palan", but Palan told me to write his story.

Compadres (Chakotay/Ayala) Sometimes love hits you right between the eyes. Sometimes it tiptoes in.

Those Words (Paris/Kim) Sometimes there are words you don't want to hear. Hanky warning, no deaths.

Darkness - **This story once again available on the web.** Even brilliant young ensigns have demons to face.

Coeur Fort (Chakotay/Paris) There is love, there is lust, and then there is anger. Prequel to Slow Dances.

Slow Dances of the Heart (Chakotay/Paris) This is a rape story with graphic scenes. But healing comes.

Rainbow (17K) Mulder/Skinner What happens after Mulder takes Skinner home from the hospital.

Watcher(16K) Mulder/Skinner/Krycek Krycek pokes at an open wound, and opens others.

Watcher III: Nightmare (14K) Mulder/Skinner/Krycek Sometimes the truth is more than you want to know.

Letting Go (11K) (Mulder/Krycek) There was only one place to go. Character Death.

Something Dark (46K) text version (Mulder/Krycek) Mulder and Krycek pay too high a price for too brief a happiness. Character Deaths | Part One | Part Two|

Silverbacks(16K) Mulder/Skinner Of all the gay bars in DC, why did Skinner walk into this one? From the "Wounded Heroes" zine.

Moonlight and Shadows (12K) Mulder/Skinner Skinner answers a knock on his door.

To Touch: A Triptych

To Touch (22K) (Mulder/Skinner) Cosmic irony and men of integrity.

Short-shorts and Poems - sometimes I get ideas that don't need whole stories to develop.

Skullcap (7K) (Mulder/Skinner) During a moment of personal crisis, Mulder discovers something new about his lover.

Shadow Bar (6K) (Mulder/?) There is a bar in Washington, DC known only to a select group of men.

Shadows at Noon(6K) Two nameless men meet in the Shadows.

Snippets - Paragraphs in search of stories.

After (3K) One day, when I feel confidant enough, I'll write this story.

Writing Exercises - When I really need to get into a character's head.

If Wishes Were Horses... (110K) Text Version Jim/Blair Jim and Blair attend the wedding of one of Jim's old army buddies. This story is dedicated to Duranee, who won it at a story auction. Formerly published in "Come to Your Senses #16."

Sight Out of Blindness (30K) Jim/Blair Blair and Jim have their lives altered by an accident. Happy Birthday, Shelagh!

In the Face of Death (10K)Jim/Blair How can Jim help Blair deal with a crisis. Happy Birthday, Caly Rose.

The Smooch (2K) Jim/Blair Late one night in the bullpen...

Tangled Up in Sheets (12K) Jim/Other Wherein Jim picks up a new friend in a familiar fedora.

Tangled Up in Love (9K) Jim/Blair/Other Wherein Jim, his new friend and Blair have a bit of fun.

Tangled Up in Fate (20K) Jim/Blair/Other Wherein Jim, Blair and their new friend find that they have much in common, including a future.

Tangled Up in Life (61K) Jim/Blair/Other Wherein Jim, Blair and their new friend explore further into their relationship.

Working Relationship (51K) Blair/other Jim/Blair Jim and Blair track a bomber to Baltimore. Crossover with Homicide: Life on the Streets.

Anthro 101 (10K) Jim/Blair Blair gets a surprise and a distraction on the first day of classes.

Self Image (90K) Jim/Blair Jim and Blair go undercover in a local high school, which leads them to discoveries at home.

Now that Jim and Blair are together, what secret is Jim hiding from Blair and Blair alone?

Also, I take liberties with Jim's character in rather disturbing ways. I do things like that, but I'm aware that such liberties are not everyone's gles of rugelach. Skip to "Meant To Be", which is a much happier story with a more normal view of the characters in the series.

This a new series based upon "Sentinel, Too", the season finale. These are "Denial" stories, which means that Blair wakes up from the fountain.

Meant to Be(6K) Jim/Blair The end of "Sentinel, Too" and its aftermath, as seen through Simon's eyes.

Funeral Rites (13K) Jim/Blair The worst happens in the blink of an eye. **Death Story**

Today (27K) Jim/Blair Blair gets a surprise on his graduation.

Moonlight (11K) Jim/Blair Yet another IRC story with a happy ending.

Partners (Fraser/RayK) What is the difference between partnership and love? Happy Birthday, Rusty!

Gated Eyes (Fraser/RayK) What does Fraser have hidden?

Presents (Fraser/RayK) An exchange of gifts.

How Bitter the Moonlight (9K) Angel/Wesley Funny how the world can reshape itself. Happy Birthday, Isabeau!

Steel (2.75K) Jack/Daniel Sometimes you don't want to be alone in the gloom. Happy Birthday, Cedara and Rae!

Wrong (5K) Danny/Casey What does it mean to be wrong? Happy Way Belated Birthday, Brak!

Unreliable (6K) Danny/Casey What have they been doing the past ten years?

And the Gates of Heaven Opened... (8K) Danny/Casey Why was Danny out in the rain?

Something Better than Nothing (10K) Casey/Danny Why is Isaac calling Casey at 3AM?

Embracing Death (13K) Methos/Spike (crossover with Highlander) It's 1978, and both Methos and Spike are hungry. Happy Birthday, AJ!

God's Gifts (2K) Joxer/Ares (Poem) What do you do when you want to give someone the world and he doesn't want it?

Finesse (11K) Mac/Fitz A bit of a fight can get a man's blood running. Happy Birthday, Laura and Indi!

Embracing Death (13K) Methos/Spike (crossover with Buffy) It's 1978, and both Methos and Spike are hungry. Happy Birthday, AJ!

Disclaimer: These characters belong to George Lucas (except for some that belong elsewhere) and I'm just borrowing them.

Note: All TPM stories following this are a collaboration between myself and Saraid.

Rival the Stars (91 K) Qui-Gon/Obi-Wan Text Version What really happened after the fight with Darth Maul?