Caryl vs Bethyl is a Ship War that originated in the Tumblr fandom of The Walking Dead, between fans of two Daryl Dixon pairings: Daryl Dixon/Carol Peletier (Caryl) and Beth Greene/Daryl Dixon (Bethyl).

Fans began shipping Daryl Dixon/Carol Peletier in Season 2 when the characters began developing a friendship, and the pairing grew in popularity. Some fans also shipped Beth Greene/Daryl Dixon early on, but it was more of a rare pairing until Season 4 episode 1, when Daryl and Beth hugged.[1]

The ship war grew in intensity when it was revealed that Daryl and Beth would be alone together, and separated from the rest of the group, after the fall of the prison in the second half of Season 4. The peak of the ship war seems to occur during the second half of Season 4, the hiatus and the majority of Season 5, including the weeks prior to, and after, Beth's death in the episode Coda.

The ship war included, but wasn't limited to, hateful posts directed at the female characters involved, and negative posts towards the "opposing" shippers. Shippers posting text posts advocating their ship and belitteling the legitimacy of the other one (to varying degrees between constructive meta to mockery to outright hate)[2][3] and the creation of fanart and manips, often portraying or suggesting violence towards characters or fans[4][5].

Actors and creators appeared to be aware of the conflict, though it's not clear on what level. Although, some shippers expressed their opinions by directly contacting the performers and creators, via Twitter. Some Caryl shippers aimed their anger directly at Emily Kinney (who portrayed Beth Greene)[6], with sesskasays recalling:

So you can imagine the outrage that came from Caryl shippers when The Walking Dead writers decided to pair him up with Beth and only Beth for three whole episodes. Before the episodes even aired, Caryl shippers were doing nothing short of sending Emily Kinney threatening messages to stay away from Carol’s man.[7]

For a while the question "Who should Daryl end up with?" was a favorite in interviews. Melissa McBride (who portrays Carol Peletier on the show) said in one interview:

Q: How nice was it to be back with Daryl this season? Are you a “’shipper” for them to get together?
A: I’m not even talking about that! I’m not adding to the fire. There’s a war out there. The fans are pretty passionate. [Laughs.] It’s really fun to see the ‘shipping,’ though. It’s pretty cool.[8]

Some fans were unhappy that the creators and actors are aware of the conflict[9].

During the ship war fans of Beth Greene/Daryl Dixon were sometimes accused of ageism by Daryl Dixon/Carol Peletier fans. One example being a meme comparing Carol to the elderly Evil Queen in Walt Disney's Snow White.[10] Forum user Beatrice remembers some Bethyl shippers during the height of the ship war:

I do remember that time during hiatus before season 5 when those vile bitches were having a field day on the Bethyl board calling MMB all kinds of horrible names and blasting her for her age... Some are gone, but not all, they continue to tromp around here like innocent little flowers seemingly also forgetting that their public displays of ageism and general prejudice have not been erased.[11]

The Carol hate is... honestly, there are no words for what the Carol hate is (ageist is the first word that comes to mind but certainly not the only one).[12]

Most Bethyl shippers deny any ageist intentions. Tumblr user Bethyl Forever explains why fans and fanfiction writers are drawn to the ship:

Another fan turns the accusations on there head by pointing out:

It’s a two way street in this respect because fighting ageism not only defends older individuals but also young ones as well.[14]

Fans outside of the Caryl and Bethyl fandoms felt the ship war was having a negative effect on the overall The Walking Dead fandom, with Element Girl commenting, in August 2014, on the Spoil the Dead forum:

I don't think I have been on this forum in the last couple of months when Beth, Carol, Daryl, Caryl, or Bethyl was not lit up as the hot button threads. It does seem like the shipping wars as well as the war over Daryl has superseded everything else on this site not to mention Tumblr.[15] 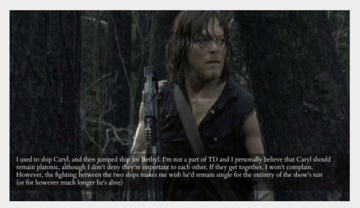 A twd confession about Daryl, shipping and the ship war

the bethyl vs caryl ship war is making the twd fandom toxic ffs, i want boths ships to go away[16]

Some also felt it damaged the Daryl fandom, with ripleytwd stating:

It hurts the character of Daryl, because fans are sick of shipping drama[17]

Some fans expressed negative sentiments towards the entire conflict, feeling it was immature[18].

Results of the conflict

Operation Levity is a direct result and response to hate being posted in the caryl Tumblr tag.