Carol Peletier is a fictional character from the comic book series The Walking Dead and is portrayed by Melissa McBride in the AMC television series of the same name. She is a popular, fan favorite character on the horror-drama series.

At the beginning of the series Carol is married to Ed Peletier, they have one child, Sophia Peletier. It becomes apparent that Ed is abusive towards Carol. Ed is killed by walkers in latter half of Season 1. In Season 2, Episode 1 Sophia goes missing, a great deal of the first half of the season is dedicated to members of group searching for her, especially Daryl Dixon. At mid-season it is revealed that Sophia was bit, turned into a walker and was being held within Herschel Greene's barn, Rick Grimes puts Sophia down. During Season 3 it is assumed that Carol is dead when walkers are intentionally set loose within the prison. Daryl later finds Carol, weak and dehydrated, hiding within a cell. Carol becomes the guardian of Lizzie and Mika Samuels when their father dies. A deadly illness is discovered and Carol kills the first two carriers, Karen and David, in hopes of stopping its spread throughout the prison. After Rick discovers Carol's action he banishes her from the prison. After the prison falls Carol is reunited with Lizze, Mika, Tyreese and baby Judith, they travel together in the latter half of Season 4. Carol is forced to kill Lizzie after she killed her sister and threatened to kill Judith. At the beginning of Season 5 Carol saves the group from Terminus. She rejoins the main group and eventually make their way to the Alexandria Safe Zone. Alexandria is attacked when by the Wolves, when the majority of the residents are away, Carol is able to get to armory, stopping the attack. At the end of Season 6, beginning of Season 7 Carol leaves the group and seeks refuge at The Kingdom. 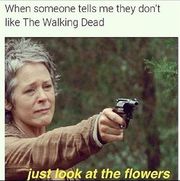 Carol's tragic decision in "The Grove" became a meme

Carol being touched by her unseen daughter Sophia, part of a fan art collection, This bitter earth, by artist Morphine Pudding