Beth Greene was a main character on The Walking Dead television series, who is not from the comics.

Beth Greene is a survivor of the zombie outbreak. She is the youngest daughter of Hershel and is the half-sister of Maggie. Losing her mother and half-brother to the outbreak devastated her. Although initially considered weak, especially with her suicide attempt, she would eventually grow to be stronger. Beth is a source of optimism and hope for the group. She would watch over and take care of Judith Grimes at the prison.

The attack on the prison had separated her from her family and she only had Daryl Dixon for company. She formed a bond with him, teaching him that were still good people and showing him he could move on from his past. He taught her how to hunt and track. However, Beth was abducted by police officers under the service of Dawn Lerner and was forced to stay at Grady Memorial Hospital in Atlanta. She helped free Noah, and tried to escape as well although she failed. While attempting again, Carol Peletier was brought into the hospital stopping her. She saved Carol's life with the help of Dawn. However when Rick and Daryl and the others try to rescue Beth and Carol, Dawn reveals her true colors in asking for Noah back. In retaliation, Beth stabs Dawn and Dawn automatically kills Beth. Daryl kills Dawn and carries Beth out to her sister.

Initially, Beth Greene was met with mixed opinions that were mainly negative due to her suicide attempt and her weakness shown in her first season. However, eventually she gained quite a following as the character grew and became stronger. In fanworks, her role as a mother-figure to Judith was prominent and thus her relationships with Rick and Carl Grimes. She became more popular as her character was featured alongside Daryl Dixon, quickly becoming beloved by fans.

Spoilers arose sometime before Season 5 due to a post published by a supposedly Walking Dead cameraman stating that Beth Greene dies in the season's midseason finale, which many fans thought were a hoax created by a Caryl fan. This angered a lot of Beth Greene and Bethyl fans, and many did not believe it. 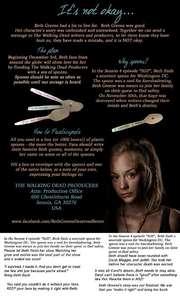 "Beth was a symbol of hope that a lot of women could relate to and see themselves in (especially self-harmers who saw her as someone who overcame their suicidal/depressive feelings). By sloppily killing her it just shows that she was used to further a man's storyline."[1]

When Beth Greene was killed in the Walking Dead episode "Coda", it was mainly rebuked by Beth fans and even some who weren't a fan of her. Many thought it was senseless and used only for shock value - and another example of Women in Refrigerators. Various fanworks were immediately created in order to honor her. A petition to bring her back was started and as of December 11, 2014 has over 50,000 signatures. A Facebook account Beth Greene Deserved Better and a Tumblr account Bring Back Beth Greene were created in order to campaign Beth's return. In retaliation of Beth's death, fans started a campaign called the Beth Greene Spoon Riot or simply called "Spoon Riot" where they send AMC plastic spoons with various Beth phrases on them (For examples check out the Spoon Riot tag on Tumblr). Good Morning America, and various other media networks, reported on the fans' petition to bring Beth back.

There is a small group of Beth Greene fan's who believe that she isn't really dead and will come back at a later point in the show. They dub themselves Team Delusional or Team Defiance.